The UK! The Culprit Behind the Kashmir and Palestine Disputes! 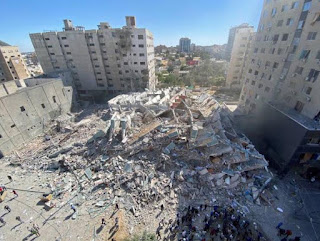 Years have passed, whenever Israeli terrorist forces attack Muslims of Palestine, this state terrorism is portrayed as a battle between two powers. Israel martyrs Muslims of Palestine in aerial as well as ground attacks for few days. During this state terrorism, while testing destructive American weapons, Israel martyrs hundreds of unarmed Palestinian children, women destroying their homes. When Israel has quenched its thirst for blood, America and its Western allies start diplomatic attempts using terms like ceasefire to stop one-sided state terrorism of Jews. The basic reason behind American and its allies' statements are the protests against Jewish terrorism and the massacre of Palestinians at the hands of Jewish terrorists and the demands of human rights organizations to declare Israel as a ‘terrorist state’. After the so-called ceasefire, Palestinians return to their destroyed homes, hospitals, and schools; funds are raised by Arab states for the reconstruction of the destroyed infrastructure. In order to please, blood-thirsty Jews, America also approves billions of dollars aid so that the land snatched from Palestinians in the name of ‘buffer zone’ can be used for constructing buildings for Jewish settlers. UNO has passed several resolutions against such constructions, in these resolutions UNO has also demanded that such illegally constructed Jewish colonies should be destroyed but who has the power to execute these resolutions. 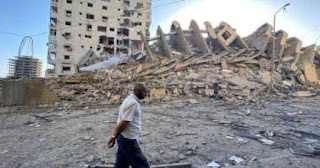 Ironically the game show of massacre of Palestinians, which is termed as war by Western Media, so-called ceasefire, after few years of reconstruction of buildings once again Jewish terrorists attack the cities of Palestine and the whole world watches the game live on their TV screens from last few decades. Every time statements are made that for sustainable peace in the region, two states i.e. Israel and Palestine must be established. Out of these two, one state will be allowed to have weapons of mass destruction like chemical, biological, and nuclear weapons. This illegal child of the West has been already established on the lands of Ottomans captured by the British in 1948. In contrast to this, Palestinians will be given a state divided into three parts not linked to each other; Palestine will have not right to have army or purchase weapons, moreover, the Palestinian Ministry of Interior will be controlled by Israel. In other words, Jews will have the right to control the lives of Palestinians. Despite this, it will be known as an independent state which will have President, Prime Minister, and Cabinet; in order to betray the masses, elections will be also conducted. Other countries will be able to have embassies in the undeclared colony of Israel i.e. Palestine. There cannot be the worst joke of imperialist forces than Palestine that for their financial and political interests a nation has been imprisoned in its own land and murdered at will.
Such a joke was done to the Kashmiris by Britain. In 1847, India on the gunpoint and undeclared Britain's support invaded Kashmir. India disconnected Kashmiris from the whole world and crossed all limits of war crimes. UNO also has resolutions on Kashmir as well while Britain, America, and other Western countries’ interests are the biggest hurdles in the implementation of the resolutions of UNO. Just like Palestinians, Kashmiris also have stones against the occupying army, Indian state terrorists retaliate with bullets, rocket launchers, and dynamite used to destroy their homes. Indian Held Kashmir is such a mass prison in which there is an Indian soldier for every 11 Kashmiris. Indian state terrorists not only have handheld arms but tanks, artillery guns, APCs, fighter jets, and helicopters. Every month an average of 10 Kashmiris are martyred in fake encounters. Those who are kidnapped and tortured to death are not included. The Hindu terrorism against Kashmiri women is a separate story; from gang rapes to the selling of young Kashmiri girls to brothel houses in different cities of India. Human Rights Organizations working for women's rights are protesting against the war crimes of Hindu state terrorists in India. 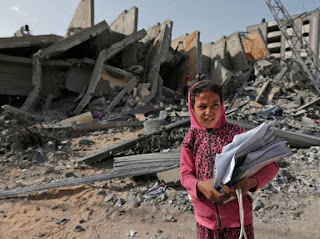 The difference between the IHK and Palestine is that Western Media telecasts the Israeli Army’s war crimes against the Palestinians; the 11 days long Israeli attack showed Israeli war crimes against humanity and the destruction of Palestine was shown live. One purpose of these live telecasts is to hurt Muslims of the world and make them realize that how weak and powerless they are. The second purpose is to secure funds from oil-rich Arab countries in the name of reconstruction of destroyed Palestine. In IHK neither there are any independent media to show the real destruction nor there are any religiously important buildings like Jerusalem for Muslims. 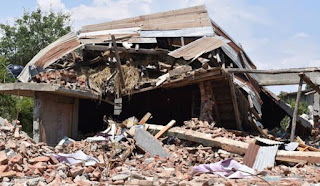 The bitter reality is that whether it is Palestine or Kashmir disputes both are created by English.

In 1947, English was forced to divide India on the basis of the Two Nations Theory and leave but due to the malafide intentions and inclinations towards Hindus, Engish delayed the implementation of the agreed rule of division in such a way that India can invade Kashmir. The plan was to grant control of rivers to India so that Pakistan an agriculture-dependent country could not stand against India and is recaptured. Similarly, after defeating Turks, the English captured Jerusalem the center of the crusades; created an illegal state of Israel in order to keep Muslims under pressure, and mint money from the oil-rich Arab countries. 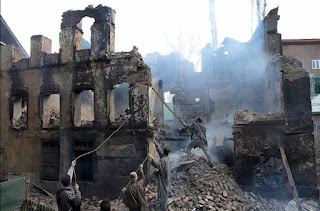 This should be kept in mind that after the discovery of oil in KSA in 1938, Britain decided to create the Israeli state which was fulfilled in 1948…
Urdu Copy
Written by Khalid Baig,
Published in Daily Nawa-i-Waqt,
Date: 31 May 2021.
at 9:24 PM