Silence Over the Genocide of Palestinians!


Israeli warplanes martyred more than 300 men and women including more than 60 innocent Palestinian children; Chief of Internal Medicine, Al-Shifa Medical Complex Dr. Aiman Abul Auf, and famous neurologist Dr. Mueen Al-Aalwal were martyred as well. Their houses were targeted using guided missiles. 5 children of Dr. Mueen were martyred as well. Human Rights Organization of Doctors protested in front of Israeli supporter western countries that they should stop Israeli attacks on Medical workers and Hospitals. They were of the view that neither doctors have any quarrel with anyone nor they are a party to the regional disputes. Doctors only believe in serving humanity irrespective of color, creed, race, religion, or nationality. The two martyred doctors were not only famous in Gaza but in Britain and other western countries due to their professional capabilities. These doctors had limited them to Gaza after the Israeli blockade of Gaza for the last 14 years. After Israeli air terrorism on Gaza, they used to serve whichever hospital or healthcare they were required to save the lives of the injured. On 16 May 2021, they went home to take some rest on the rest of the healthcare workers where they were martyred in Israeli terrorism using guided missiles before sunrise. 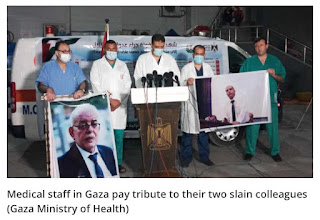 In the afternoon funeral of the martyred doctors was performed; Minister of Health in Gaza Dr. Yusuf Abu-Alrais said that Israel is targeting hospitals and doctors in its state terrorism. He said that 6 big hospitals and 12 medical centers have been destroyed in the Israeli terrorism. Israel purposely targeted Electricity supply lines especially those supplying power to hospitals and roads connecting hospitals. Due to the destroyed roads, it is impossible to shift injured to the hospitals, while disrupted power supply has made it impossible to provide emergency treatment to those injured in Israeli state terrorism, surgeries cannot be performed due to nonavailability of electricity while lives of Corona patients have also been threatened. Dr. Yusuf demanded that many doctors from Western countries want to join hands in saving the lives but Israeli aerial terrorism is a big hurdle in their visits. The healthcare system of Gaza has been destroyed by Jewish terrorists. Dr. Yusuf also provided pictures of those children and women who lost their lives in the hospitals after Jewish terrorism.

On the martyrdom of two Palestinian doctors, Al-Jazeera TV telecasted a special program; on 15 May 2021, Israeli fighter jets destroyed an 11 storey Al-Jaala building. This building contained offices of Al-Jazeera and Associated Press an American news agency. This was the first time in history when media representatives fixed their cameras at safe distance and telecasted the live destruction of Al-Jaal tower through state terrorism.  The so-called flag-bearers of freedom of speech and human rights, rulers of America, Britain, and other Western countries did not dare to say anything. Al-Jazeera female representative Youmna Al Syed disclosed that Al-Jaala tower contained different business offices and 60 residential apartments. When the Israeli army’s representative called AP’s office and said that after 1 hour, Israeli fighter jets will target the building. There was only 1 working elevator in the building. The difficult task was to inform the occupants of the building to evacuate the building so that everyone can escape only carrying hand baggage. Elevator was spared for children, women, and the elderly. The panicked people decided to evacuate the building by carrying their children.

American News Agency contacted their Central Office to interfere but it was useless. It seemed as in place of Israel America was attacking an Arabic country otherwise it was not difficult for Americans to stop Israeli terrorist attacks. The most precious thing for inhabitants were their children and their own lives. Media persons had many more precious things to evacuate, especially the recorded clips and the computers that contained all that data. After denial from America, AP news journalist contacted Israeli Intelligence Officer and requested for 15 extra minutes but his request was turned down and 4 missiles were fired on the building destroying it. After the destruction of the building, Israel claimed that the building was being used by Hamas which was exploiting journalists as human shields. Israel has no evidence to prove his allegations, moreover, Israel is not bound to answer anyone for her state terrorism. However, Jewish terrorism has disclosed the reality of so-called human activists shedding tears of the fabricated holocaust. In the current scenario, it seems that stories of the holocaust are mostly fabricated and fake.