Pakistan Army’s Sacrifices for Protection of Motherland and Nation!

This is not the first time Pakistani soldiers have been targeted from Afghanistan. This is continuing since 1973, Sometimes the attacks are minimized and sometimes increase in frequency. Enmity from Afghanistan against Pakistan is as old as Pakistan. Despite having knowledge of conspiracies in Afghanistan against Pakistan, Pakistanis always tried to support Afghans, however, as result, Pakistan has always received hatred and terrorism. The basic reason behind the Afghan enmity is the presence of strong communist groups. They changed their lord towards capitalist America after the disintegration of their secular god Soviet Union. In the name of the socialist movement they first of all denied acknowledge Pakistan as an independent state and got busy in conspiracies against Pakistan. Conspiracies like separation of Balochistan to capturing KPK and tribal areas in order to include these areas into Afghanistan termed as Greater Pakhtunistan. Their conspiracies have always been supported by India since independence. In order to execute their plans, Soviet Union’s secret agency KGB, Afghan Khad, and Indian RAW started terrorism in Pakistan especially remote control bomb blasts in order to disintegrate Pakistan.
Those who took weapons in order to break apart Pakistan for Communism are now known as respected citizens of Pakistan. However, they are still busy injecting venom against the Pakistan army through their analyses and writings. They claim this treacherous act as their right in the name of Freedom of Speech. They want to fulfill their desire which they failed to achieve at gunpoint by fueling hatred in the nation against the army.
Pakistan army or Pakistani govt. Has not invited the Soviet Union to invade Afghanistan. These were the communists of Afghanistan in the Afghan govt. When they saw the failure of their plan to convert Muslims of Afghanistan to atheists, they provided their support to Moscow in order to enslave Afghan Muslims to the Soviet Union as resistance against their atheist plans was growing stronger day by day. Afghan ruling communists were unable to control the resistance. The resistance of Afghans against the Red Army of the Soviet Union was the natural reaction of the Afghans. So-called intellectual comrades in Pakistan misinterpreted the resistance of Afghans. They should have realized that if the Soviet Union had a history that the Red Army never retreated from where they attacked, Afghans have always preferred death over slavery in spite of being afraid of guns, and Afghanistan has a history of sending the invaders to the graveyards. Afghans did the same to the Soviet Union; these Afghans were resisting the Zahir Shah’s attempts to change the Islamic identity of Afghanistan. They were not protesting but also ready to lay their lives.

With the start of the Gorilla war against the Soviet Army, Afghan migrants entered Pakistani tribal areas adjacent to the Afghanistan border. At that time Pakistan had no system to check the entrance of Afghan migrants from narrow passes in mountains. There was no need to devise such a system before because many tribes were living across the border and had relations and joint businesses. If Pakistan had not supported Afghan Mujahideen against the Soviet Union, they had already made Afghanistan a living hell for Soviet Soldiers. The only difference would have been that the Soviet’s defeated army that was withdrawn ten years after the attack would have spent ten more years, however, it was destined to fail.
After the retreat of the Soviet Army, the civil war that spread in Afghanistan has a separate history that came to end after the establishment of the Taliban govt. After the disintegration of the Soviet Union and the defeat of Soviet Pakistani and Afghani comrades changed their lord from the Soviet Union to the West and America however, their hatred and enmity against the Pakistan army continued because this was the requirement of their god India. 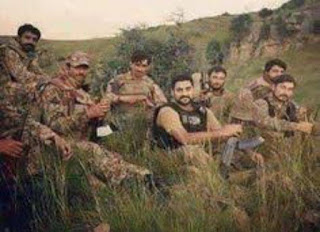 After 9/11 America and its allies invaded Afghanistan in the name of the war against terrorism. This provided a hot chance to India to exploit her presence in Afghanistan for terrorism in Pakistan. India exploited the American war on terror in the war against Pakistan through suicide bomb blasts. Pakistani security forces and soldiers of the Pakistan army defeated Indian terrorists by sacrificing their lives. In order to prevent the entrance of Indian-trained terrorists from Afghanistan, the Pakistan army erected a barbed wire fence on the entire Western border. This erection of the barbed wire fence was unacceptable for India, she activated her paid elements within Pakistan as well to protest against it. Afghanistan Army and Indian terrorists time to time attacked Pakistani soldiers busy in the erection of barbed wire fence.
Such an attack was once again seen on 15 April 2021, in the Maner Sector of District Zhob when FC soldiers busy in erection were attacked across the border. As a result of the firing of Indian-trained terrorists, 4 soldiers Hawaldar Zaman, Sipahee Shakeel Abbasi, Sipahee Ehsan Ullah, and Nike Sultan were martyred while 6 others were injured. On the intelligence information that few terrorists are hiding in the Dosli Northern Waziristan, during the operation Captain Faheem, Sipahee Shafee, and Sipahee Naseem embraced martyrdom on 15 April 2021. In a single day7 sons laid their lives for the motherland.
Alas! The telecasts from private channels remained limited to the news reports of ISPR but talk shows of politicians blaming each other were more important for them pushing the audience to hopelessness by portraying political chaos. Perhaps, dirty politicians and dirty politics are more lucrative for the TV channels than emotions and feelings of families of martyred soldiers and officers…
Urdu Copy
Written by Khalid Baig,
Published in Daily Nawa-i-Waqt,
Date: 10 May 2021.
at 4:55 PM