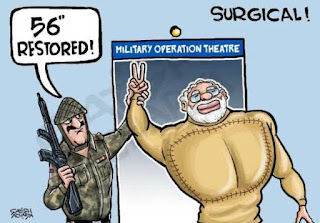 Few weeks ago the disclosures of Favourite Anchorperson of Hindu Extremists, RSS, and Modi, Arnab Goswami’s conversation proved that False Flag Attack of 14 February 2019, at District Pulwama of Indian Held Kashmir was planned by Modi along with higher command of the Indian Army and Military Intelligence. In this attack, more than 60 Indian soldiers were killed. These Indian soldiers who became the target of State terrorism belonged to the lower caste. The families of the killed soldiers protested in New Delhi along with the leadership of the lower castes on 17 February 2019. Till then it has been widespread in India that the Pulwama attack was staged by Modi and Amit Shah for elections was few months ahead. The families of the killed soldiers blamed that through proper planning, the bus carrying only lower caste soldiers was targeted.

The windows of the bus had steel rods while the doors of the bus were also locked from outside with iron bars. That is why no one was able to get out of the bus or get out the soldiers who were injured. Whether it was the Indian Defense Minister, Minister for Information, or Indian Army Spokesperson no one was willing to face the Indian media. In spite of giving answers to the journalists on giving contradicting answers, and the questions raised by the journalists Secretary of Defense left the press briefing. BJP in spite of postponing the election campaign on such a big incident chose to exploit its election campaign to fuel hatred against Kashmiris terming them as murderers of the Hindu soldiers. As a result, Kashmiris studying in different cities became the target of Hindu terrorism. Hindu extremists were also fueled against Pakistan by blaming Pakistan for being responsible for the attack. Hindu extremists started demanding to take revenge of Pulwama attack from Pakistan. Modi was also busy fuelling hatred against Pakistan and propaganda.

Independent Indian media was disclosing such evidence of the Pulwama attack that was in contrast to the Indian propaganda, statements of the Indian establishment, and Indian state media. Indians were not ready to disclose the details of the Indian soldiers killed in the false flag attack. NDTV and few other channels started telecasting not only the names and pictures but also interviews of their families. According to the details, 1 Muslim, 3 Sikh, 1 Bengali, 5 scheduled Dalit, and others belonged to lower caste Hindus. Indian army in spite of explaining the details of these realities was busy supporting Modi and BJP. Indian Retired Officers protested on such an unprofessional attitude of the Hindus army. Indian Retired Officers, advised the army remain away from Hindutva politics rejecting the threats given to Pakistan in a gathering by Modi on 15 February 2019. Army Chief was warned that Modi’s politics will destroy the professional capability of the Indian Army. Indian Navy’s Retired Admiral Arun Prakash wrote:

"Ruling party politicians successfully exploited what passed for military gains on the election campaign trail, to project the B JP’s ‘robust’ handling of national security issues. And in turn the self-centred and pecuniary minded soldiery, in most instances, was rewarded with promotions whilst in service or lucratie employment after retirement, or in some cases both. It is no many senior officers are increasingly identifying themselves with the ‘Hindu Nationalism’ of the BJP led administration, that in turn unashamedly seeks to exploit military achievements for political gain." 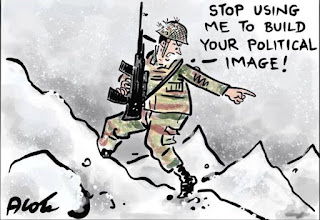 The second episode of the Pulwama attack was the violation of Pakistani aerospace by dropping Israeli Spice 2000 bombs in the deserted areas of Balakot on 26 February 2019. in this attack, few trees were destroyed by Indian terrorists. India posed this as a big achievement. Indian media started propaganda that the Indian Air Force destroyed the training camp of Jaish-e-Muhamamd at Balakot. Local Pakistanis spotted the deserted area where the Indian air force dropped the bombs. The video of fallen trees and big craters got viral on social media negating Indian propaganda. On the second day, the befitting reply by the Pakistani Air Force destroyed the morale of the Indian Air Force as well as the Army. Now was the turn of the Retired Indian Air Force leadership. They said that the failure of the Indian Air Force is the result of serving the political interests of BJP and Hindu extremists. Not only the befitting reply of the Pakistan Air Force was appreciated across the world, but the Pakistani verdict was also acknowledged as well. Opposition Leadership of India demanded that Modi should stop exploiting the Indian Armed Forces for political purposes. However, after being insulted by being exploited in the hands of Hindu extremists, Indian Army Chief General Bappan Rawat accepted the resignation of Chief of Defense Staff after retirement proving that concerns of Retired Admiral Arun Prakash were correct…