The Silence of Indian media over the disclosures of Arnab Goswami 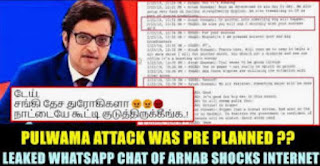 On 14 February 2019, an Indian army bus was targeted by a suicide car on Sri Nagar Highway in District Pulwama of Indian Occupied Kashmir (IOK). Indian media started blaming Pakistan for the bomb blast while reporting the attack over the Indian army convoy. Fierce propaganda war against the Pakistan army and ISI was started. This news was first of all telecasted by Republic TV of Arnab Goswami. Other TV channels took some time in verifying the reports of Republic TV. In the meanwhile, Goswami has created a strong case against Pakistan in his notorious hateful style against Pakistan. In such a situation it was not possible for other Indian TV Channels to differ from the statement of Goswami. This was also initially reported by Goswami that the suicided bomber who hit the vehicle laden with explosives in the Indian army’s bus was a local namely Adil Ahmad Dar who also claimed the responsibility for the blast through a video message; Goswami also claimed that he belonged to Jaish Muhammad. According to Goswami, the video was uploaded on the website of Jaish Muhammad. Other Indian TV Channels had no choice left but to follow Goswami’s version in propaganda against Pakistan. The bomb blast was unusually strong. Indian media was claiming it was a suicide bomb blast. The scenes telecasted by Indian media showed the human remains and injured soldiers scattered everywhere. The soldiers present in the target bus were scattered, the other vehicles were also heavily damaged. According to the Indian media, 50 soldiers were killed while more than 100 were injured. Modi and his ministers blamed Pakistan for the blast. India had been blaming Pakistan for training terrorists and the use of terrorists against India. Although Pakistan has rejected the Indian blames, however, Arnab Goswami was celebrating on his channel that he was the first to report the blast.

The strategy for propaganda has raised concerns in Indian journalists. Moreover, the information is given y Indian Amry and Defense Minister was clashing with each other as it was a fabricated story; it became impossible for Modi establishment to defend its version of the incident. For example, Indian  Investigations revealed that 300 kg explosive, 80 kg RDX, and Ammonium Nitrate was used in the blast. The question is that how Adil Dar secured such a big quantity of explosives and how he loaded it into a truck converting it into a suicide truck? As a reaction to these questions “Truck” was converted into “Car”, and the explosives were told to be stolen from a company working in the breaking of mountains by6 GOC Northern Command Lt. General Deependra Singh Hooda. When journalists asked about the registration of a case on such a big theft in the Police, General Hooda said that it is possible that explosives may have been smuggled across the LoC. Journalists asked that how 300 kg of explosives could be smuggled into IHK in the presence of the Indian army over LoC? General Hooda left the briefing incomplete.

Indian opposition rejected the role of Pakistan in the Pulwama incident claiming that this bloody drama was staged by the Modi establishment to win the contests and expressed concerns over the Army’s involvement in Modi politics. After this the stance; “Pulwama attack is an Indian act” got acceptance in India. Modi establishment tried to hide behind the tortures and Hindu extremist attacks on Kashmiri students studying in different Indian universities. Kashmiri shopkeepers were attacked and their shops were looted. Kashmiri students were protected by Sikhs in Mumbai to return to their homes because Hindu extremists had threatened to take revenge from Kashmiri women for the Pulwama attack. India also demanded Financial Action Task Force (FATF) to blacklist Pakistan. According to the reports of the EU DisInfo Labs, Indian propaganda was given acceptance and weightage at that time. The Pulwama Incident resulted in the national insult for India on 27 February 2019 by Indian Air Force.

Now the WhatsApp conversation between Goswami and his partner Parthu Das Gupta, CEO of Broadcast Audience Research Council (BARC) has been leaked out. These leaks have jolted the Indian media. Goswami used to share the national secrets of India with Gupta, he used to show that he has links with the higher command of the Indian army and Modi, he used disclosing such information ahead of time with Gupta so that his channel is ranked higher. Due to some illegal activities by Gupta, he wanted Goswami to help him in mutilating the investigations but Goswami in spite of helping him broke links with Gupta. Gupta got angry and leaked out the conversation with Goswami, while leaking out the conversations he forgot that he has also leaked out some dirty secrets of India as well.

Now the situation is that Indian propaganda against Pakistan has been reported internationally. The conversation shows that the Pulwama attack was staged by the Indian army, Goswami was aware of the upcoming attack ahead of time. However, Indian media is silent over such a sensitive issue. Gupta has been arrested by Police, however, the actual culprit who disclosed all this information is still at large. By staging Pulwama Drama Modi established got double benefits, on the one hand, Pakistan was entangled in the Grey list of FATF while on the other hand, Modi secured the votes in the election. Goswami’s chat has disclosed the reality of Indian terrorism which should be reported to FATF and other countries through diplomatic channels.; Not only this, India has become a Mafia of terrorists in spite of showing some responsibility, which is dangerous for the whole region... 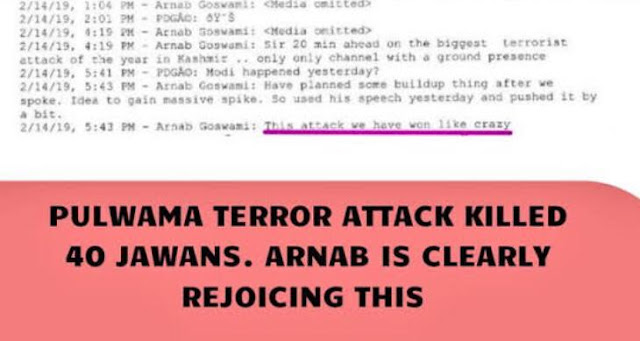