Disclosures of Youngster from Gilgit Working for "Indian Chronicle" 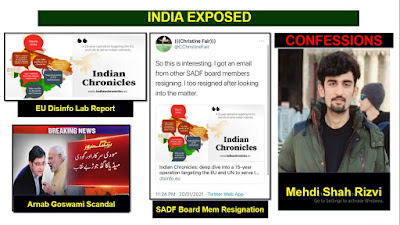 The disclosures by European DisInfo Labs of the Indian network spread across 116 countries for propaganda and enmity against Pakistan, more and more Indian chronicles and conspiracies against Pakistan are being reported that are mind-blowing. In today’s developed era when it has become difficult for IT experts to hide their IDs for a long time while defrauding others; India was busy deceiving the International community for the last 15 years; the target was the persons related to the news. Affected by Indian deception many International media houses and Departments had concerns about Pakistan. India kept silent to counter the disclosure of the Indian network by European DisInfo Labs. The serious blow to the Indian propaganda network was the resign of the members of the South Asian Democratic Forum that was established in Brussels by Indian Chronicles, members said that they do not want to be part of a fake think tank. Said think tank remained at the forefront in propaganda against Pakistan. Indian Sponsored Baloch Insurgents, Pashtun Tahaffuz Movement (PTM), and supporters of Sindu Desh were exploited by the said forum for fabricating statements and stories against Pakistan Army and ISI. In January 2021 reports of resignation by members of said forum jolted the Indian Foreign Ministry, India left no stone unturned, however, Board Members announced their resignations on 21 January 2021. 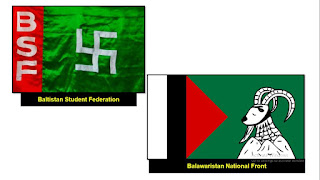 Another blow for India was the confession of Mehdi Shah Rizvi working for the promotion of Indian propaganda against Pakistan in Gilgit-Baltistan. He confessed that how he was entangled by Indian Network to be used against Pakistan as a pawn.  He said that Indian agents fuel nationalism in students of Gilgit-Baltistan and afterward they are used for Indian interests against Pakistan and Pakistan army. He said that he was also misguided by Indian agents in nationalist parties and used to work for them. After analyzing the disclosures by DisInfo Labs he realized that he is not alone, there are many Pakistani youngsters who are being exploited by RAW for financial assistance, migration abroad, and shining futures against the motherland and Pakistan Army. 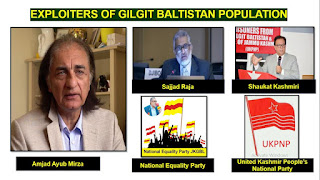 He said that agents hidden in national movements incited his father (in the name of nationalism) to speak against Pakistan and Pakistan's army in the International Seminars. Similarly, he was given a script prepared by RAW agents to be read in a Human Rights Session at UNO against Pakistan Army. He further added that along with him, Dr. Amjad Ayub Mirza living in Scotland, Sajjad Raja, Head of National Equality Party living in the UK, and Head of United Kashmir Peoples National Party Shaukat Kashmiri was also exploited by Indian agents for propaganda against Pakistan. Mehdi Shah in his statement disclosed that Advocate Mehbub Afaq Bilawar, Shabbir Meyar, Gheyas Uddin, Najaf Ali, Asif Naji, Qamar Naji, Mushtaq Comrade, Ali Shan, and Habib Ullah, etc. persons are active in propaganda against Pakistan supported by India. On the incitation by few out of the list, he joined Baltistan Students Federation and Biladristan National Front, afterward, he was exploited for statements against Pakistan army and security agencies. He also was incited to submit an application to France for Assylum. 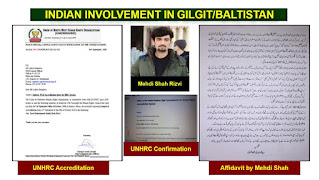 Mehdi Shah said that he met Amjad Ayub Mirza in Italy, he was paid and assured that India is at his back against Pakistan. Amjad Mirza incited him to deliver a speech against Pakistan and the Pakistan army in front of the Pakistan embassy in Italy and demanding that Gilgit Baltistan should become part of India. He was provided with a written speech by Amjad Mirza. After the protest in front of the Pakistan embassy in Italy, his speech and video of the protest were made viral on social media. Afterward, he was incited to participate in various online conferences on the promises of having one to one meeting with Modi and representation in UNO. on 22 October 2020, Indian sponsored nationalists staged a protest in Gilgit Baltistan; people from Shugar, Khiplu, Skardu, etc. had to be brought in for the protests but govt. did not allow the protest and admins of the protest were arrested. He was promised heavy financial assistance for reacting against Pakistan by burning his Pakistani Passport and flag in front of the Pakistani embassy in Italy. He said that many other youngsters like him have been converted into Indian RAW agents by so-called nationalists; they have been betrayed and deceived by nationalists on the platform of the Baltistan Students Federation.

Although disclosures by DisInfo Labs have made Mehdi Shah realize the deceptions and betrayal of Indian RAW from Mehdi Shah’s heart, he also disclosed all those characters who are busy inciting youngsters against Motherland and Army in the name of sectarian issues. These confessions and disclosures by Mehdi Shah should have been reported by Pakistan Electronic Media by giving it proper coverage, it should have been discussed in talk shows so that youngsters may save themselves from venomous Indian propaganda and conspiracies, perhaps our anchors on TV screens are not paid for this. In the end, it is requested to the govt. that youngsters like Mehdi Shah who became agents of India in past and have now returned back should be encouraged and given protection...