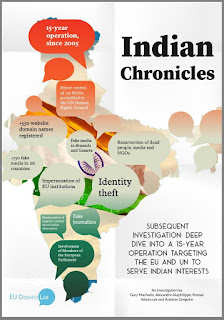 With the disclosure of the Indian Chronicles, a flood of disclosures of Indian Network spread across the globe against Pakistan has been observed; this network has been active since 2005. The procedure adopted by this network left behind the Underworld. First of all, a fake media house established outside India published a fake report by a fake think tank in some other country. Other fake Indian Media network gave their analyses over the fabricated report; this analysis was taken as basis by Indian Media and Propaganda Machine against Pakistan. Taking the talk shows as a base, Indian international newspapers published their editorials. These editorials were then picked up by fake Indian NGOs located in New York, London, and Geneva; seminars were held where these fabricated reports were discussed and published in notable Western Newspapers. Before reporting these reports in the mainstream media, the reports were circulated over social media and the internet in such a way that one was forced to believe it to be true. Even the experts of research over the Internet took these reports as genuine. The Indian network was so much strength that even the UN and its attached organizations were deceived as well. 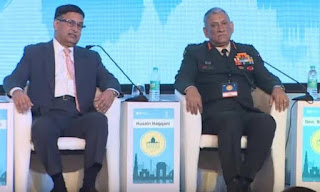 Indian Propaganda and lies were disclosed when a Western NGO EU DisInfo Lab working as an observer to observe the fabricated news reports on the internet; a news report claiming human rights violations in Azad Kashmir was broke by a famous news website. This was strange and unbelievable that the Pakistan army was involved in the violations of human rights in Azad Kashmir. On research, the said news report was observed on other hundreds of news websites. The IP of these news websites were traced back to India after passing through many countries. On further research, the fabricating network was spread over 166 countries through different links and fake media outlets like fake news websites, media houses, etc. This jolted the IT experts; the target of the propaganda was Pakistan controlled by India. This network is so well organized that defamation of Pakistan was not bein done by India but by different Western Countries, NGOs working in different Muslim Countries have complained against Pakistan, and analysis was represented by experts of these NGOs. 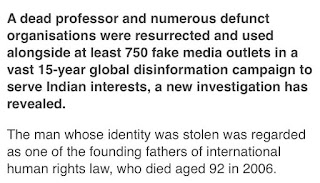 Two months ago in November 2020, the jolting disclosures were made by EU DisInfo Lab. Many Western experts furthered the research and tried to trace those personalities who were serving in preparation of fabricated news for Indian propaganda. The majority was of those Pakistanis who were residing in Western Countries and they had support from within Pakistan as well. Astonishingly most of the fabricated news was reported by ex-Pakistan Ambassador Hussein Haqqani and his think tank SAATH for Indian propaganda. Was Hussein Haqqani working for India since 2005 or he joined Indian later on, this is a separate discussion. According to the research of Andrew Hamilton, most of the news reports used in Indian Propaganda were fabricated by Hussein Haqqani and his think tank. The procedure was that first of all he gave suspicious interviews to unfamous and fabricated media outlets operated by India from different countries in which he blames the Pakistan army for human rights violations and deteriorating peace. He told fake stories of Pak Army atrocities committed in Balochistan and NWFP, sometimes he blamed the Pak Army for controlling Sindh and Punjab. 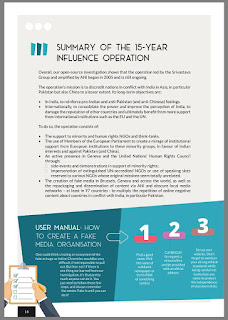 In his interviews, he not only used insulting sentences for the Pakistan army but also spoke against Pakistan. These interviews were then given coverage by Indian media as breaking news. How Hussein Haqqani’s fabricated reports and stories damaged Pakistan can be observed from the inclusion of Pakistan in the Grey List by FATF. Due to Indian Propaganda Pakistan has to face different pressures. Although the Indian Propaganda network and fabricated media outlets have been disclosed, Indian propaganda would continue until agents of different NGOs working for India and members of Hussein Haqqani SAATH think tank is active against the Pak army within Pakistan. Although the Prime Minister of Pakistan has ordered to take action against these Indian elements in Pakistan; let's see how seriously the order is implemented... 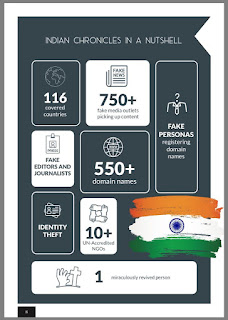