Indian Shelling on a Marriage Party in Azad Kashmir

Kashmiris living on both sides of the Line of Control (LoC) are facing the worst state terrorism. In Indian Held Kashmir (IHK) Kashmiris are being subject to the worst torture and atrocities of Indian State Terrorists. In the blood-freezing cold, the homes of Kashmiris are being destroyed. There is no one to help Kashmiris who lost their homes due to Indian state terrorism. According to the report presented by the Human Rights Commission on 25 November 2020, Indian soldiers destroy the homes of Kashmiris under fake allegations of providing shelter to Kashmiri Freedom Fighters. Indian soldiers are continuously destroying homes across the IHK for the last few weeks. Most of the affected families used to earn their livelihood by grazing goats and sheep or small farmers. They earn their livelihood from apple orchards or cultivating crops over their lands. Indian army is also cutting down orchards. 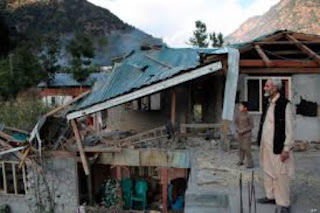 Concerns are being expressed that these lands captured at the gunpoint are to be used for constructing homes for Hindus just like Israel did in Palestine. Before destroying the homes Indian army surrounds the community and spread terror in the name of the search for Mujahideen. The inhabitants are forced to get out of their homes including men, women, children, and the elderly. Men are allowed to take out whatever they want from their houses. If anyone resists, he is tortured and shifted to an unknown concentration center. Afterward, houses are demolished and leveled to the ground. Kashmiris keep on crying for their homes. They do not where to take refuge from the blood-freezing cold. Where should they take their cattle? Powerless Kashmiris are demanding that they should be buried alive by Indian State Terrorists. 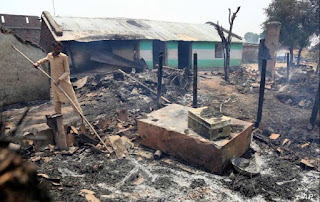 On the other side of the LoC, the Indian Army is involved in continuous shelling across the LoC. On 13 November 2020, the Indian army started shelling with heavy artillery across the LoC in Neelum Valley and other sectors destroying civil installations. Many houses were blazed. Indian army tries to destroy as many civil installations as possible. Pakistan's army remains vigilant to give a befitting reply to such Indian state terrorism. Those Indian posts are targeted that are targeting civilians in Azad Kashmir. In the response from Pakistan, not only Indian posts and artillery guns are destroyed but Indian terrorists are sent to hell as well. The difficulty of the Pakistan army is that we have to protect Kashmiris living across the LoC while the Indian army has been attempting to install artillery installations within the inhabited areas. In these civilian villages across the LoC, there is a majority of Sikhs. It is very easy for the Pakistan army to destroy everything including Indian posts across the LoC if we also have not to regard for the civilians. But Pakistan tries to abide by the ceasefire of 2003 and only targets Indian check posts involved in shelling civilians. 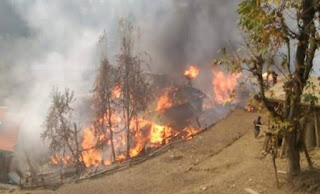 Alas! The international community and UNO remain silent over the war crimes of the Indian army in IHK and shelling over civilians in Azad Kashmir. This silence of the International community is encouraging India to continue its state terrorism. On 22 November 2020, the Indian army targeted a marriage ceremony in Jagjut village of District Kotlli with rockets and mortar shells. This state terrorism of Hindu India injured six women, 4 children, and 2 men. Afterward, a 7-year-old girl succumbed to injuries. Her mother was also among the injured. According to District Administration, due to corona only limited near relatives were invited into the marriage ceremony. Due to the presence of only a few persons, the loss and injuries were less otherwise Indian state terrorism would have claimed a large number of lives. When the news of targeting a marriage ceremony spread over social media; people within India started criticizing the Indian army who forgot to give a reply to the Chinese Army in Ladakh but feel proud of torturing unarmed civilians in Kashmir. Indians raised questions not only on the professionalism but moral values of Indian state terrorists. A well trained and disciplined army never target children and women in civil inhabitants but the Indian army is only trained to fire on unarmed civilians, women, and children. Whether these are Hindu extremist leaders or the Indian state terrorist army, they will not give up their terrorism and war crimes unless they are criticized on the international level. The time has come for the world to come ahead, impose bans on Terrorist India, and declare India as a terrorist state involved in terrorism not only in its illegally captured states but across the borders in neighboring countries as well…
Urdu Copy
Written by Khalid Baig,
Published in Daily Nawa-i-Waqt,
Date: 07 December 2020.
at 10:47 AM