Explosion at Peshawar Madrassa after Threats by Ajit Doval

This cannot be a mere coincidence that on 26 October 2020, Ajeet Kumar Doval, Security Advisor Modi discloses New War Doctrine against Pakistan and China and wage war within both countries while talking to extremists Hindus of UP and 2 days after the threats bomb blasted in Madrissa Jamia Zubairia. At the time of the explosion, Maulana Rahim Ullah Haqqani was teaching the students about the Quran and Hadith early in the morning at about 8 am. Including 2 teachers 8 people were martyred. 4 of them were children of age less than 13 years. This is the 2nd incident in which underage students were targeted by Indian sponsored terrorists. In December 2014, terrorists from Afghanistan attacked the Army Public School. According to the reports Doval was present in the Indian terrorist center (Consulate) at Jalalabad and was guiding terrorists to live through mobile. The evidence (voice recording) was presented before the Afghan govt. by higher leadership of the Pakistan army. Approximately after 6 years, Indian secret agencies have once again targeted innocent Pakistani children through Indian terrorists. Right after the blast, through proper planning, Indian media tried to pose the incident as a sectarian issue. However, no one paid any attention to Indian Propaganda. This blast has proved that till the presence of Indian in Afghanistan neither peace in Afghanistan is possible nor Pakistan is safe from Hindu terrorism.
India has grown so much influence in NDS and the Afghan National Army in the name of the training and advice that the Afghan govt. seems powerless in front of them. Ashraf Ghani and Abdullah Abdullah have time to time promised that Afghan land will not be allowed to be used against Pakistan. But terrorists attack Pak-Army convoys in Balochistan, Pak-Army check posts in tribal areas, Pak-Army’s military convoys are targeted through mines and Pakistani soldiers are targeted from inside Afghanistan without any provocation. This has been reported by International Media that on 16 August 2020, a meeting was held between Indian Terrorist agency RAW, Afghan NDS, TTP, Jamaat ul Ehrar and Hizb ul Ehrar in Paktika, Kunar Province of Afghanistan. 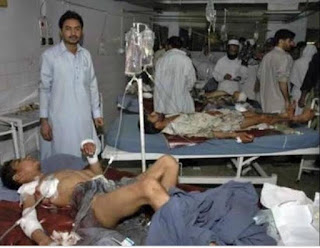 In this meeting representatives of the above-mentioned terrorist organizations promised to spread terrorism in Pakistan collectively. The meeting was recorded and afterward uploaded to their website claiming that the meeting was held somewhere in Pakistani tribal areas. They wanted to pose that despite Paksitani's claims they are still present in tribal areas and control areas of Pakistan. A news website from Afghanistan rejected the claims and pinpointed the place in Paktika where the meeting was held between three terrorist organizations, RAW and NDS. After the said meeting, the Pakistan army became the target of terrorist attacks in Balochistan especially those areas adjacent to Afghanistan and Iran. In Tribal Areas, military vehicles were targeted through land mines. This shows that misusing the trade facilities and lenient policies for Visas to Afghan citizens were abused by the terrorists to infiltrate Pakistan. Moreover, the propaganda of Pakhtun Tahafuz Movement (PTM and Mehmood Achakzai like pro-Indian nationalists against the Check Posts of Pakistan army the number of check posts was decreased which provided the chance to terrorists to restart their activities.
The bomb blast in Peshawar Madrissa Jamia Zuberia shows that terrorists are once again trying to reorganize themselves, however, they have not been able to conduct their activities on a greater level. They do not have the capability to conduct suicide bomb blasts, the credit goes to the Pakistan army and Secret Agencies. Pakistan army and its secret agencies are continuously in the war against terrorists, due to the untiring efforts of ISI terrorists are unable to establish the center in tribal areas. No one has claimed responsibility for the blast in Peshawar. According, to Western Media, Maulana Rahim belonged to Afghan Province Nangarhar and his Fatwa against ISIS in 2016 while he was in Afghanistan, and migration to Peshawar shows that Maulana Rahim Ullah Haqqani was the actual target of the blast. 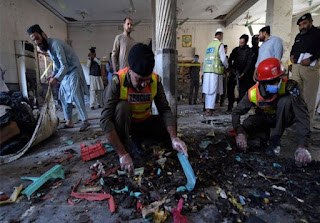 Pro-Indian elements like My Body My Choice blamed the Pakistan army for Security Lapse. They should have opened their mouth against powers involved in terrorism in Pakistan and blamed those masterminds of terrorism in Pakistan…
Urdu Copy
Written by Khalid Baig,
Published in Daily Nawa-i-Waqt,
Date: 02 November 2020.
at 11:45 AM