Under Section 42 to 56 of Geneva Convention approved in 1907 regarding International Issues, UNO acknowledges Indian Held Kashmir as a disputed area. Under the resolutions of UNO India is bound to follow all the rights of Kashmiris in IHK. The irony is that Indian State Terrorists in IHK are using torture and violations of human rights as a war strategy. Although, Geneva Convention gives clear-cut rights even to the Prisoners of War (POW) India is violating all these rights and international conventions. Kashmiris who have been facing Hindu State Terrorism for the last 7 decades have been forced to hell by the removal of the special status of Kashmir on 05 August 2019. With the suspension of telecommunications, lockdown and continuous curfew the access to eatables, hospitals, and medicines has been made impossible for Kashmiris. As Kashmir has been cut down from the world, it has been made impossible for the world, human rights organizations like Amnesty International to report the crimes of Indian State Terrorists (Indian Army). The spread of Corona Pandemic has further eased Hindu India to commit atrocities against Kashmiris, tighten the curfew in the name of lockdown to deny medical facilities to those Kashmiris who are getting infected with Corona. India is exploiting Corona Pandemic for the genocide of Kashmiris. In the name of search, unarmed Kashmiri youngsters are being martyred within their homes. In such a grave situation world should pay attention to section 55 and 56 of the Geneva Convention:

“The occupying power must ensure sufficient hygiene and public health standards as well as the provision of food and medical care to the population under occupation”. 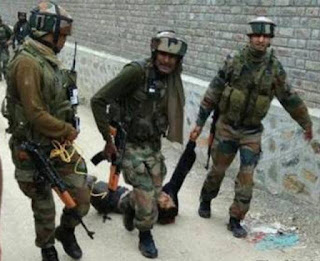 Indian violations of international conventions are time to time reported by international media. India is not ready to act upon resolution No. 2532 approved in 2020 by the General Assembly of UNO which emphasizes the countries fighting against each other, imposing bans on the public under their control to ignore mutual disputes and utilize mutual resources for the fight against Corona. India has not only been involved in state terrorism in IHK, but the Indian army is also continuously involved in the violation of the ceasefire on Line of Control (LoC) targetting innocent unarmed citizens of Azad Kashmir. Just like the whole world Azad Kashmir is also facing Corona Pandemic. Pakistan is trying its best to provide medical facilities to Kashmiris of Azad Kashmir. Citizens of Azad Kashmir are facing Corona on the one hand while on the other hand, they are becoming targets of Mortar bombs, Artillery Fire, and firing from Machine Guns by the Indian Army. In order to divert the attention of the world from the war crimes of Indian soldiers committed in IHK, India wants to maintain a war-like situation on LoC. In such a situation, on one hand, life for Kashmiris living in IHK has been converted into hell while Kashmiris living in Azad Kashmir are also worried about their brethren in IHK where India and its terrorist soldiers are continuously violating the international rules and regulations. The second important issue is the shifting of Hindu extremists into IHK to change the balance of the population. This migration or shifting is banned by the Geneva Convention;

“Collective or individual forcible transfer of population from and within the occupied territory are prohibited”.

In the 6th Paragraph it is said;

“Grave violation; Transfer of the civilian population of the occupying power into the occupied territory, regardless whether forcible or voluntary are prohibited”. 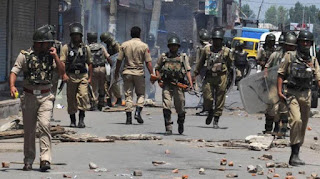 During the Corona Pandemic, unchecked transfer of Hindu extremists into IHK has increased the threats of Corona break down in IHK. According to Indian media, the Modi establishment wanted to transfer a few families of Hindus before winter. In order to change the balance of population, the Modi establishment has decided to shift retired Indian Army soldiers and RSS terrorists; in this regard, lands to be allotted to these Hindu occupants had already been pinpointed. With the removal of the special status of IHK on 05 August 2019, thousands of acres of land of IHK were captured by Hindu terrorists, the construction of cantonments and camps has been started as well. More than 1500 Hindu families have been shifted to the houses constructed by Modi establishment on the occupied land snatched from Kashmiris. Despite the curfew and lockdown imposed for Kashmiris Hindu terrorists were allowed to move freely in the valley. While only 350 Hindus were issued Kashmiri Domicile. These were those Indian Army terrorists who got retired in IHK after completing their long service of state terrorism in IHK. Hindus shifted from different parts of India to IHK, played a vital role in the spread of Corona Virus in IHK.
Protesting on this situation on 14 September 2020, UNO’s High Commissioner for Human Rights Michelle Bachelet Jeriva expressed concerns over the spread of Coronavirus in IHK and said that violation of the Geneva Convention is dangerous for the Kashmiris especially the issuance of Domicile as a grave violation of Geneva Convention. These are some of the violations of human rights in IHK which were unveiled by Amnesty International in its reports and now Amnesty International has been forced to leave India. India is at its peak regarding violations of human rights, state terrorism in IHK, and war crimes. These can only be checked by complete harmony and mutual unity in Pakistan on the Kashmir issue. This unity should not be limited to the public only but between the ruling and opposition parties. Kashmir is our collective issue and we must support Kashmiris, Kashmiris are not fighting the war of freedom but the war of Completion of Pakistan as well…
Urdu Copy
Written by Khalid Baig,
Published in Daily Nawa-i-Waqt,
Date: 15 October 2020.
at 9:58 AM