In India, Amnesty International is also among the Hindutva victims 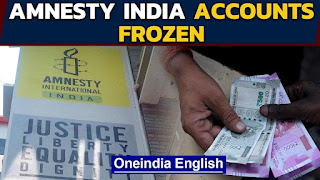 Insulting Humans and Humanity has become an integral part of the Indian govt. and its state-run departments. Previously only minorities were the target. Massacre of Muslims, Sikhs, and Christians; Indian history is filled with such crimes against humanity. Not only minorities but 52% of Indian population lower caste Hindus are also subject to such treatment by Brahmans that may give you shivers. You will never imagine that in today's developed era anyone could be so much cruel that a married couple of own religion is stripped nude publically and set on fire one the crime that belonging to lower caste how did they dare to enter the park of the Brahmans. Last year in the month of July, terrorists of higher caste Hindus stripped a married couple in public in Madhya Pradesh and later on, set them on fire. While they were indulged in Hindu terrorism there was no one to stop them. Police dared to reach there after Hindu terrorists had gone away and even the bones of the couple were burnt to ashes. No one knows who were they and from where they had come. As there was no one to follow the case, therefore it was filed.
2008, is known as the year of the massacre of Christians in Orissa. On 23 August 2008, when the news spread that Hindu Swami Laxananda Saras Wati, Hindu terrorists attacked the Christian villages, set Christian houses and churches on fire. Nuns were gang-raped before being burnt alive. Christians' houses and businesses were looted and blazed. The massacre and looting continued till 26 August 2008, till the imposition of a curfew. Hindu terrorists continued their activities even in the curfew. Afterward, violators were ordered to be shot on sight. Hundreds of Christian families fled to jungles to save their lives. The extreme of brutality is that Hindu terrorists who were involved in the massacre were given the task to count the number of Christians killed or burnt alive by Indian Police. 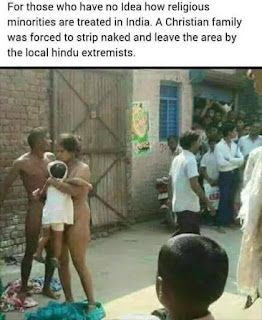 In 1984, after murdering of Indira Gandhi, Congress known as the secular party and its leaders considered as human friends were involved in the massacre of Sikhs across India. Sikh women were raped publically on Indian roads. Children were cut into pieces in front of mothers. It seemed Hindu Extremists have no humanity at all. Whether they belong to Jawahar Lal Nehru, Sardar Patel, and Maulana Abu Alkalam Azad’s Congress or BJP of Modi, LK Adwani, or RSS. There is no difference in the terrorism done by these Hindu terrorists against Sikhs, Christians or Muslims. Whether it is the massacre of the Sikhs, Christians, or riots against Muslims that occur in 2-4 years, Indian Police, Bureaucracy,n Courts, and Army are always seen supporting the Hindu terrorists. The behavior of these state departments was similar in the 1947 riots after partition providing protection to Hindu terrorists.
The only difference is that Congress has taken the veil of secularism and claims of being the world’s greatest Democracy. Under this democracy and secularism, the people of Jammu and Kashmir were made a slave to Hindus, denied the right of self-determination by imposing draconian laws. They are denied the right to live, put in torture cells, and dead bodies buried in mass graves. Kashmiri women are gang-raped. On the demanding imposition of UN resolutions, Kashmiris are murdered. Pellet gun (Shotguns) are used to wound their faces and take their eyes. The world keeps on singing the song of Indian Democracy terming war crimes of the Indian Army in Indian Held Kashmir (IHK) and state terrorism against minorities as an internal issue of India. Under the cover of Secularism, the Hindu state massacred Muslims for 4 days in Gujarat. Even European Media could not stay silent despite timely payments from Hindu terrorists on state terrorism in Gujarat. Burnt corpses, Cut bodies, thousands of houses set on fire were screaming to the so-called developed nations that the genocide of Muslims was carried out through planning at the state level. India should have been declared a Terrorist State for such crimes. United Nations should have imposed bans on India but just verbal statements were considered as the punishment for India.

When Modi murderer of Muslims of Gujarat became the Prime Minister of India in 2014, he snatched down the mask of democracy and secularism from the filthy face of Hindu India. He announced that India will be turned into a Hindu State where all rights will be given according to Hindu ideology i.e. all the rights for higher caste Hindus. Modi was sure that the political, economical, and geographical interests of world powers with India will force the world to accept the terrorist face of Hindu India. If the world stayed silent on the genocide of thousands of Muslims in Gujarat why world would object to the terrorist face of Hindutva? Despite all this Amnesty International continued its protest on terrorism against humanity in India. 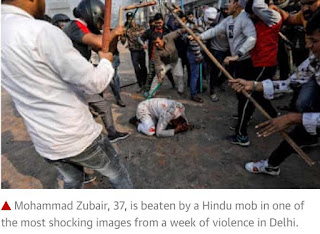