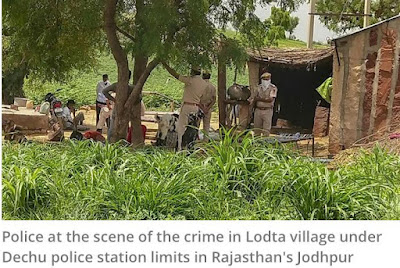 5 years ago a family of Pakistan Hindus from Sindh migrated to India. One may remember that after coming into power in 2014, Extremist Hindus’ leader Modi chalked out a policy of bringing Pakistan Hindus into India. The goal behind this policy was to defame Pakistan that the Hindu minority is not safe in Pakistan. Before this RAW took some Hindus from Balochistan and presented before Indian media claiming that Pakistan's army is committing atrocities against Hindus of Balochistan. After this Indian media started a propaganda campaign that just like the 1971 invasion and conspiracy in Eastern Pakistan, the Indian establishment should start armed interference in Balochistan especially ordering Indian Airforce to protect Hindu Baloch. Few Indian writers even reached the heights of propaganda by saying that in the Eastern Pakistan Indian army invaded to help Muslims while in Balochistan Hindus are being targeted and protecting them is the duty of Hindu India. This propaganda died its own death with the due course of time.

In 2014, Modi decided to play the game on some new horizons. Under this strategy, Hindu families consisting of 483 people migrated to India from Sind. After this Indian media kept saying that Hindus of Pakistan are unsafe in Pakistan and forced to take refuge in India and are being kept special camps, the International community should take notice of atrocities against Hindus in Pakistan. Nothing was reported about how migrated Hindus are living in India. India Today reported in 2015, that a family of migrated Hindus has been settled in Lodta village of District Jodhpur Rajasthan. The report expressed concerns that whether Hindus or Muslims from Pakistan are not issued visas of Rajasthan, in such a situation settling Hindus migrating from Pakistan in Rajasthan is astonishing.

5 years passed and people forgot about the Hindus who migrated to India. On 09 August 2020, Indian newspapers published news that according to Dechu Police Station of Jodhpur, 11 persons of a migrant Hindu family committed suicide. However, Indian Police failed to produce any evidence or note supporting suicide. Afterward, Indian Police reported that the elder of the family Keval Ram went to the crop fields after eating dinner where he fell asleep, when he returned home early in the morning, the whole family had died. Police expressed suspicion over 38 years old Lakshmi who was a Nurse by profession and also the wife of Keval Ram that he, first of all, gave sleeping pills to the 2 men, 4 women, 5 children, and Keval Ram by mixing them in dinner and when they fell asleep she injected the family with poison and murdered them. According to police strips of Alprazolam were found near the dead bodies and signs of injection were also visible. While Keval Ram went to the crop fields so he survived.

On the 2nd day, the Police issued a new statement that two Hindu brothers Keval Ram and Bodu Ram (Budha Bhel) of the Bhel tribe from Pakistan migrated to India in 2015. They got their children married within their family in India and they fought with each other. Due to these fights son of Boduram left his wife in India and returned back to Pakistan. According to Police both of these families were experts in black magic.

Two different stories from the Police within a day made Indian journalists suspicious as well. That is why a different story was published in the Indian newspapers, Indian journalists started questioning the claims of suicide by Indian Police. Indian media started expressing concerns over the death of 11 Pakistan Hindus in India. In the meanwhile, the relatives of these migrating Hindus in Pakistan unveiled the whole story. Sri Mati Mukhi Daughter of a murdered Hindu in India told media in Pakistan that her father and 10 others were murdered by RAW through Hindu Terrorists of RSS. RAW was forcing her father to return back to Pakistan and work as a spy. She further disclosed that her father Budha Bhel, mother Antari Bhel, brother Reevo and two sisters Lakshmi and Piyari went to India for religious rituals where agents of RAW lured them for staying in India and afterward pressurized her father to act as a spy for them. Her father denied working for RAW. When the pressure increased, her father decided to return back to Pakistan and this was the reason behind the murder of the whole family. Sri Mati Mukhi demanded that justice should be done and murderers should be punished. The Foreign Ministry of Pakistan also demanded from Indian High Commission that investigation details of the murder of 11 Pakistanis should be shared with Pakistan. Despite these demands Extremist Hindu govt. India did not feel any shame. On 5 September 2020, Sri Mati Mukhi told media that they have been threatened by RAW that if the Bhel tribe kept on demanding the arrest of culprits their relatives in India will be murdered as well, not only this they will not be spared in Sind as well. She demanded from UNO and OIC to give her justice.

After no positive response from India, Member National Assembly and Chairman Hindu COuncil Dr. Rakesh Kumar met with Foreign Minister Shah Mehmood Qureshi on 22 September and announced that they will stage a sit-in in front of the Indian High Commission. Foreign Minister told him that the Indian govt. is not giving access to Pakistan High Commission in New Delhi to the investigation of the murder of 11 Pakistanis while Pakistan is, again and again, demanding that Pakistan should be allowed to take part in investigations. Ramesh Kumar said that not only Hindus but the whole Pakistan nation would participate in the protests against India and the sit-in will continue until Pakistan is allowed to take part in investigations and given autopsy reports. On 23 September 2020, Hindus from the Sind gathered in a temple at Dharki and afterward left for Islamabad. Before their departure, President Hindu Council Gopal Das told media that he will not step back until the murderers of 11 Pakistanis are punished and will disclose the dirty face of India in the whole world.

However, under the leadership of Ramesh Kumar, Hindu protestors were not allowed to enter the diplomatic enclave by Islamabad Police. Sri Mati Mukhi was also present in the protesting procession, she told national and international journalists that she is working to get justice for her father and family. Despite Islamabad Police’s steps to stop protestants from entering into the diplomatic enclave, protestors entered into the Red Zone staging sit in on Constitution Avenue. Chairman Hindu Council Ramesh Kumar said that sit-in will continue for 7 days and may be extended if the Indian establishment does not arrest the culprits. Protest of Hindus in Islamabad is going on.

This is the first protest of the history which is staged by the minority of one country against the country consisting of their religious fellows in the majority...