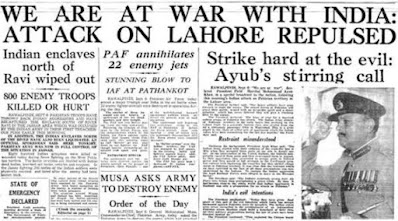 In September 1965, Hindu extremists, BJP, and RSS terrorists were not in power in India, however, BJP’s Prime Minister Modi repeated the same mistake on 05 August 2019 that was done by the Congress party on 06 September 1965 by dreaming of capturing Lahore. Information Minister of that time Indira Gandhi issued had already issued a press release by the Indian govt. on the eve of 5 September 1965 i.e. “Lahore has been captured”. Due to the difference in time zones of India and European countries, India was sure that when newspapers will be published in these countries, India would have captured Lahore. When the European public will read the newspaper they will get the breaking news of Indian victory. Indian Army Chief General Chaudhary’s talk with journalists on 05 September 1965 was also published by the Western newspapers along with the capture of Lahore in which he has invited journalists to visit Lahore and meet him at Gymkhana Club Lahore for celebrations of victory. Neither Indira was an alcoholic nor General Chaudhary was fond of repeating movie dialogues. In such a scenario why they were dead sure that the Indian army will easily capture Lahore? This question is still under discussion in India and raised in September by Indian analysts and intellectuals. Ex-Deputy Chief of India, Lt. General (R) Harwant Singh wrote in his post to indiandefencereview.com titled as 1965 War, General Chaudhary did not order withdrawal behind river Beas. In his post, although he has fabricated Indian victories against Pakistan however, in the opening paragraph he writes;

“Fifty three years have passed since the 1965 war with Pakistan. Still, controversies and confusion on may issues and events persist. It is not because the official history of this war is shrouded in secrecy. The documents with the MOD, MEA, RAW, IAF, and blackout of authentic information. Hearsay, gossip, speculation, calumny continue to be floated and controversies around. 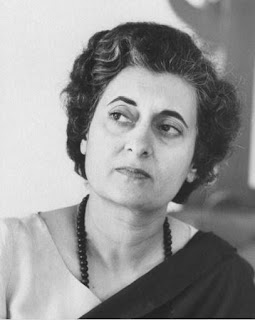 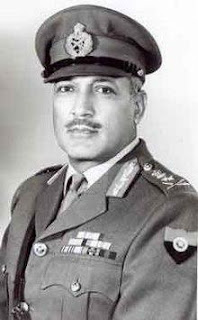 The above mentioned concerns of Indian ex-General show that leaving aside the skirmishes between India and Pakistan in Indian Held Kashmir (IHK), Indian retired officers and Generals accept the decision of India to attack Lahore as a wrong decision. This should be kept in mind that the results of the 1965 war were not those that are being taught to us by Pakistani liberals, pro-Indian intellectuals and pro-Indian western media. They make us happy by telling us that Indian dreams of capturing Lahore were shattered, Indira and General Chaudhary has to face insult in the light of their claims. They do not explain why India having 5 to 10 times bigger army, weapons and economy failed in fulfilling her nefarious designs. The simple answer is that difference in the both armies for fighting against the enemy and the passion was the main thing that Indians could not capture even a single inch of Lahore. This passion of Pakistan army made Pakistan army win against the worlds worst terrorism in 2002 imposed by enemies of Pakistan in such a way that handlers of terrorists are worried that how their terrorists were captured and destroyed. When a nation is filled with the passion to defend its freedom, ready to sacrifice lives than neither it can be threatened nor defeated. 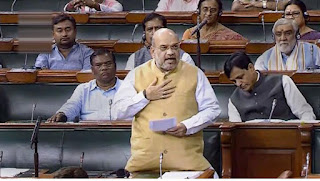 Kashmiris living in IHK is the living example of such passion and sacrifices. Hindu leaders of India thought that by removing the special status of IHK, using inhuman torture as a weapon of state terrorism, Kashmiris will not be able to stand against such torture and will give in front of India. The speculations of Modi, Amit Shah, and Ajit Kumar Doval proved to be wrong as in 1965 Lal Bahadur Shastri, General Chaudhary, and Indira have speculated before attacking Lahore. Despite the passage of 1 year and 1 month of curfew in IHK, the Indian govt, Army and The media is not ready to disclose why curfew has not been ended in IHK. Why international media is not given access to Kashmiris living in state prison of IHK? Why peace mission is not allowed to visit IHK despite various demands from UNO. Why the development projects of billions of dollars to win the hearts of Kashmiris have not been started?

This will never happen because Kashmiris are not ready to accept the slavery of Hindus at any cost. According to the American thinktank, the US Institute of Peace has rejected the Indian stance over Kashmir as a fabricated story and expressed concerns that daily murders of Kashmiris terming them as terrorists by Hindu state terrorists will create further restlessness and resistance. US think tank considers Indian stance that the unlawful capture of IHK is an internal matter of India as a lie that India cannot prove. Now the atrocities committed by the Indian army in IHK are being taken as war crimes rather than violations of human rights. Indian analysts are terming the stance of Hindu extremists over Kashmir as dangerous for the overall existence of India. All those states where freedom movements are active, youngsters are joining these movements to get rid of terrorist India. Indian secret agencies have reported to the Indian parliament that after 05 August 2019, people of 12 Indian captured states are inclined towards freedom from Indian state terrorism. They do not consider themselves as Indian citizens but citizens of Indian captured states. These feelings cannot be ended by so-called democracy or election because are raising concerns over the electoral process. The majority of the Indian public has understood that soon Indian rulers will have to admit that like the failed attempt of capturing Lahore in 1965, the ending of the special position of IHK was a wrong decision. This decision has not accepted by the world as well as Indian opposition parties. Kashmiris are stead to their demand that being a Muslim majority area Kashmir cannot become a part of India. This is to be decided only by Kashmiris that whether they want to join Pakistan or India…

Email ThisBlogThis!Share to TwitterShare to FacebookShare to Pinterest
Labels: 1965 war, conspiracy in 1965 war, Curfew in IHK