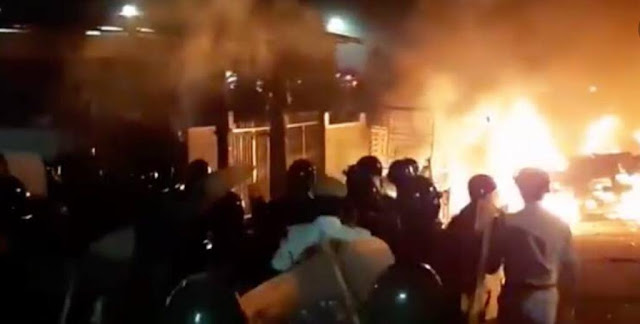 On the night of 11-12 August 2020, Naveen Kumar, nephew of Akhanda Srinivasa Murthy MLA of Congress, from Pulikeshi Nagar, Bangalore Karnataka uploaded blasphemous content against Prophet Muhammad ﷺ on Facebook. As soon as the blasphemous content was uploaded the news spread like fire in the last hours of the night among Muslims. They all knew Naveen Kumar and his father; contacted the local police station, DJ Halli. Police remained lethargic as routine and were unable to understand the seriousness of the situation. Perhaps they were unaware that Muslims will tolerate everything but the insult of their Last Prophet is intolerable and they are always ready to sacrifice everything including their lives. On the lethargic attitude of the Police, violent Muslims arrived at the home of Naveen Kumar and his uncle that are adjacent to each other. Muslims were demanding that Naveen Kumar should be handed over to them. in spite of understanding the situation, Hindus supporting MLA attacked Muslims. The number of Muslims was increasing; in no time the whole area was turned into the battlefield. In meanwhile Police also woke up and arrived there. Muslims told Police that they have nothing to do with Hindus living there, they just want Naveen Kumar. Police tried to control the situation by suppressing Muslims when Police failed to control the situation, Police baton-charged Muslims. Muslims burnt the vehicles parked outside the house of MLA and Naveen Kumar. 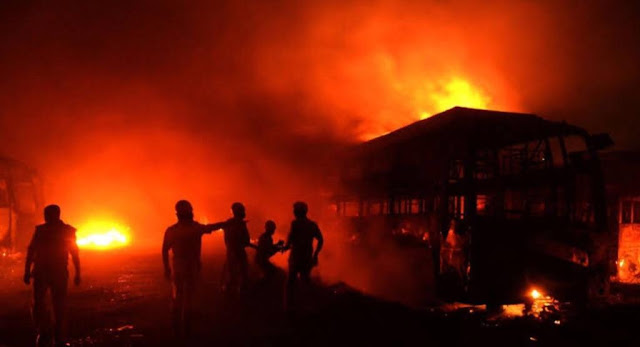 Understanding the seriousness of situation Police announced that Naveen Kumar has been arrested and shifted to Police Station. Muslims left for the Police Station. When they reached Police Station, they were told that the accused has been shifted to some unknown place. Muslims realized that they are being deceived. They broke into the two PS of the area. after setting vehicles and office of the PS on fire, the violent mob tried to enter living areas of Police. Police started straight firing, killing 19 years old Yasin, 18 years old Wajid, and 26 years old Siddique on spot; many people were injured out of which 3 are seriously injured. 200 Muslims were arrested. In the areas of two Police Stations of Bangalore curfew was imposed. 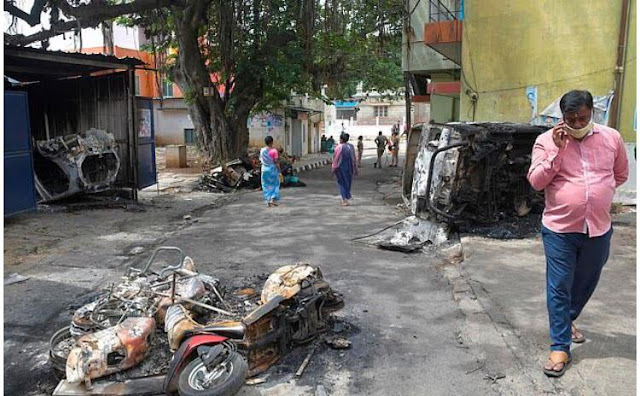 On the 12 August 2020, Chief Minister B.S Yediyurappa called an emergency meeting, ordered the investigations to be carried out and told media that blasphemous the content was removed from Facebook on the same night, however, he did not tell that where is Naveen Kumar and whether any case has been registered against him or not? Interior Minister Basavaraj Bommi accused Muslims of organized burning of MLA house and Police Stations hinting that Muslims, not Naveen Kumar will be punished. 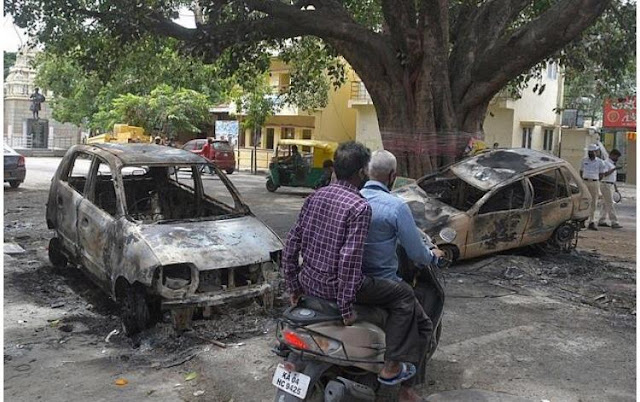 MLA Akhanda Srinivas Murthy gave the statement, "I appeal to my Muslim brethren not fight over some who has violated the law. Whatever be a matter we are all brothers. Whoever is responsible we shall ensure that proper punishment is given to those responsible. I am with you".

This statement was repeatedly telecasted by state and local channels. Indian National channels, newspapers, and TV channels reported that violent Muslims tortured journalists during the protest and broke their cameras. India Today journalists reported that journalists were tortured by Police not Muslims. Commenting on the post protest situation he said that the place on which journalists were present, there was only Police and no one else. Policemen knew that they are all journalists. When police started beating journalists they targeted journalists of specific media groups especially those who were against Modi's extremist policies in India. 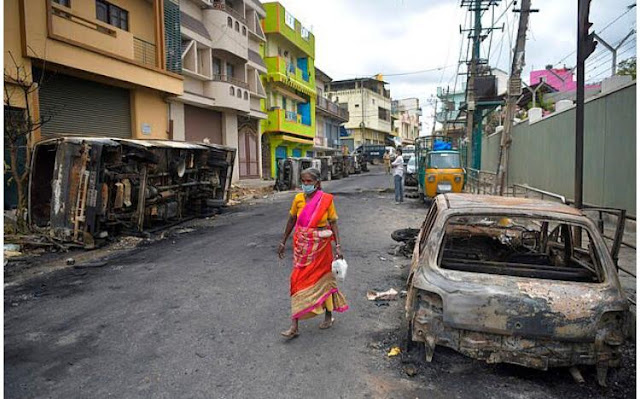 In the areas where Muslims were killed by Police, the situation was tense. In the meanwhile, Muslims besieged a Hindu temple by making human chain by taking hands into hands. They did not want that Muslims get violent due to Police's policies against Muslims and damaged temple. In such a scenario the situation might have been converted into Hindu Muslim riots causing a great loss of innocent lives. Especially Amit Shah and Modi may exploit the situation against Muslims all across India. The protection of the temple by Muslims was appreciated at all levels in India except by extremists of BJP, RSS, and other extremist parties. Naveen Kumar issued a statement that blasphemous content was not uploaded by him. His Facebook account was hacked for spreading Hindu Muslim riots. Sashi Tharoor of Congress party condemned the Facebook post fueling riots saying that mere a post on Facebook should not be given such importance. He appreciated the protection of the temple by Muslims and said that followers of all religions should practice such patience. Bangalore's Muslim MLA Rizwan Arshad and MLA ABZ Zamir said that they demand strict action against Naveen Kumar and appealed Muslims to remain peaceful. Pakistani Foreign Ministry's strict response against blasphemy was also reported in Indian media. 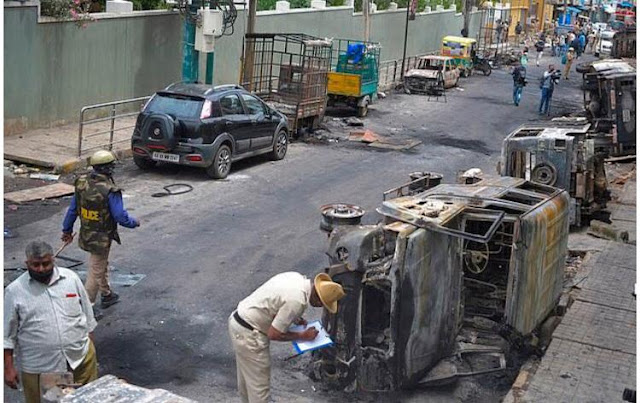 Astonishingly, other Muslim countries did not react against the blasphemy. facebook's role in spreading the riots and removal of the post after the death of 3 Muslims on 3rd day was also criticized. The third story was reported on the 3rd day as well as reporting that Naveen Kumar is linked with BJP and inclined towards Hindu extremism. MLA Murthy told media that he has ended terms with Naveen Kumar for last year. He expressed solidarity with Muslims saying that he has been elected MLA 3rd time by the support of Muslims. This should be also taken in mind that Karnataka is ruled by BJP. BJP was exploiting the situation to divide Muslims of Bangalore. CM Karnataka BS Yediyurrapa is working to take action against the Muslim leadership of the Social Democratic Party of India (SDPI) as they were the first to give the call for the protests. Whatever the situation of internal politics is in India, Muslims of India have proved that they are true lovers of Prophet Muhammad ﷺ and will not tolerate any blasphemy...