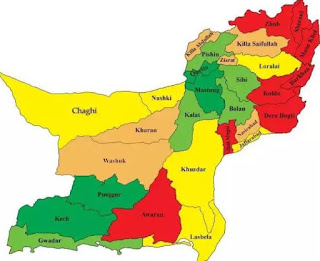 On 14 July 2020, terrorists ambushed the Pakistan army’s patrol in the Kuhan Valley of District Panjgur of Balochistan. This attack claimed 3 lives while 8 were severely injured, 5 being in a critical situation, and shifted to CMH Quetta. This is not the first terrorist attack near the Afghan-Iran border area of Balochistan. On 19 May 2020, Pakistan army’s jeep was targeted with a mine, 9 Km away from Iran border in which 6 soldiers were martyred. Before this on 08 May 2020, in the Kech of Balochistan FC patrolling vehicle was targeted with a remote control mine martyring 6 soldiers including Major Nadeem Abbas. The question is how terrorists suddenly got active in the areas adjacent to Iran and Afghanistan. While BLA terrorists target Karachi for attacking state buildings, first they tried to attack the Chinese Embassy but failed and a few weeks ago four MISSING PERSONS of BLA terrorists were killed while attempting to enter KSE building. Due to the erection of the barbed wire fence and implementation of the Border Management System at the Pak-Afghan border, it is difficult for Indian RAW and Afghan NDS to infiltrate their terrorists in Pakistan from Afghanistan. If any reports of the presence of Indian terrorists are received, our soldiers do not waste a moment in crushing these snakes. In the operation against terrorists on 12 July 2020, 4 Pakistani soldiers were martyred while a big number of Indian state terrorists were killed, a huge cache of automatic weapons was recovered as well from Miranshah. Pakistan army neutralized Indian's attempt to harm innocent Pakistani by sacrificing lives. After the erection of strong defense of Pakistan army in tribal areas, India is targeting through RAW trained terrorists. In Balochistan, the Pakistani army has limited terrorists in a few areas of Southern Balochistan and it is not possible for these terrorists to extort money from local inhabitants by threatening them. Baloch is no more interested in the slogans of Freedom for Balochistan. In such a situation why BLA is targeting Chinese consulate and national departments like KSE?
International analysts agree that internationally declared as Terrorist BLA was working under the supervision of KGB of Soviet Union, Afghan Khad, and Indian RAW from 1973-1979 before it got its new identity in 2000. At the start of 2000, BLA started working under the disguise of protecting the rights of Baloch but its main purpose was to pressurize Pakistan to bow in front of American interests in Afghanistan. After 2002, when China and Pakistan started working on Gwadar Port, BLA was given the task to stop China from stopping Chinese access to the Pakistani sea. CPEC was also unacceptable for few countries of the region, however, India was funding BLA.
After 2003, discussions were started in India that the Pak-China trade route would limit the Indian role in the region. The results of these discussions were nightmares for India. Even Western media and think tanks also agreed to increase the role of India in Afghanistan so that India may exploit Afghanistan as a proxy battlefront against Pakistan to stop CPEC. In order to make India acceptable for the International Community and uplift the soft image of terrorist India, International Media started the campaign of SHINING INDIA portraying India as a developing country. India was portrayed as an undefeatable state. Indian govt. issued special funds to Bollywood for the production of films showing the Indian army’s successful operations and wars against Pakistan. This was the time when Afghanistan was used as the second battlefront against Pakistan under the cover of war against terrorism and to cover state terrorism of India, Pakistan was blamed for terrorism in neighboring countries. International media was funded for furthering Indian propaganda. This was the hardest time for Pakistan. From Peshawar to Karachi Indian terrorists were busy in suicide bomb blasts, target killing, and terrorism. The economic development of Pakistan was halted. International investors focused on India. More than 60,000 innocent Pakistanis were martyred in this Indian terrorism.
Pakistan army waged war against Indian terrorism in the long and short of Pakistan. Operations were started in the tribal areas targeting hideouts of Indian terrorists. This was the hardest war of history. More than 7000 Pakistani soldiers along with officers were martyred. The nation gave the sacrifice of the unsung heroes of ISI and other secret agencies who invaded enemy lines and reported the latest developments. The world witnessed the victories of the Pakistan army. The next target was the Indian sponsored agents hidden within the public and the Pakistan army achieved the target successfully.
The recent attacks of BLA terrorists are the last breathes of the Indian sponsored terrorism. The sacrifices of the Pakistan army make it clear that no power on earth can harm Pakistan in the presence of these brave sons. Astonishingly neither notables of political and religious parties have issued any statement on these martyrdoms nor they have felt any need to participate in the funeral of the martyrs. Indian anti-Pakistan propaganda has lost its attraction. Indian soft image has been tarnished in the region. India has been isolated due to its terrorist activities in the neighboring countries. God knows when so-called pro-Indian nationalists and intellectuals would understand that…