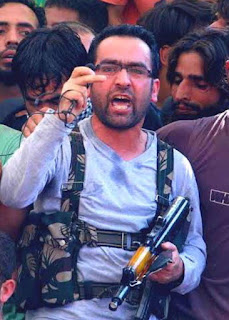 On 04 May 2020 Indian Forces envisaged Beighpora area of District Pulwama, Indian Held Kashmir (IHK) at about 10 am. People of the area considered it as a routine activity of the Indian army. Because since the removal of Special Status of IHK Curfew and other bans were imposed and after every two weeks Indian Army used to envisage the area and search operation in the homes. Sometimes, few males who resisted against the manhandling of the Kashmiri women during the so-called search operation were abducted claiming that they are suspect facilitators of Kashmiri Mujahedeen or Freedom Fighters. People of IHK are used to such atrocities in the name of the Search Operations by the Indian Army. However, on 04 May 2020, the Indian army after envisaging the area did not enter into the village but started to dig up tunnels in the fields destroying many ripe crops. Villagers thought as per routine Indian State terrorists are destroying their crops in the name of the search for the tunnels dug by Kashmiri Freedom Fighters. This situation continued for two days. During this Indian state, terrorists cut down many apple trees. When the owners of the apple orchards protested against it, they were tortured and tied up to the cut tree trunks and afterward continued the process of cutting the trees in front of them. People feared that the Indian army wants to capture their lands because the number of Indian state terrorists was more than routines. Secondly, they were accompanied by APCs. On 6 May 2020, Indian state terrorists started firing on the village. 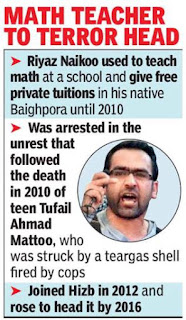 Indian state terrorists did not warn the people of the village that what are they going to do nor they were concerned about the innocent lives in the blind firing. During the severe firing, some blasts were also heard. Afterward, people got aware that the blasts were the sounds of the RPGs that were targeted at selected houses. The firing continued for 6 hours. Despite the end of firing no one was allowed to get out of their homes for 2 hours. Afterward, when people got out of their homes they came to know that Indian state terrorists have martyred Riaz Naiko along with an accomplice who took the leadership of Hizb-ul-Mujahedeen after the martyrdom of Burhan Wani in 2016. in this 6 hours long drama fighting with the 2 Kashmiri freedom fighters Indian state terrorists destroyed 5 homes with RPGs while 10 were damaged in such a way that they were no more inhabitable. In addition to the destroyed homes, many homes were badly effected with the fire of Machine Guns. In the evening Father of Riaz Naiko was told that his son has been buried at some unknown place. As a result, protests broke out in the IHK. The pictures that were received and published by Indian Media has raised many questions about his martyrdom.

In one of the pictures, he is seen sitting on the ground, while his hands are tied to his back, envisaged by the Indian soldiers. This is obvious that before martyrdom he was arrested. The second picture is after his martyrdom, in which ropes of his hands are cut down, and his dead body is full of dirt. Indian media and army both are silent over these pictures. No one is ready to tell whether Riaz Naiko was martyred due to the hitting of bullets or buried under the rubbles of the destroyed houses? His body and face both have no blood stains and bullets. In both pictures, he is wearing the same T-Shirt with full sleeves. This proves that he was arrested alive, taken to one of the destroyed houses where he was tied and drama of fake encounter of 6 hours was staged. During this bloody drama cattle of the village were killed by Indian state terrorists. In this way, many families who used to sell the milk for their livelihood were left resourceless. 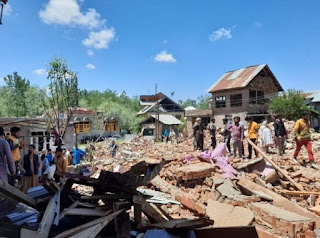 The most important question is that what about the inhabitants of the houses that were destroyed by Indian State Terrorists? Were they shifted to some other place before the start of the operation? Or they died under the rubbles of the houses? They might have been expelled from the houses in the dark of the night, if they have been left buried under the rubble it cannot be kept hidden for such a long time. Moreover, during the 6 hours long firing of automatic weapons, the death of only Riaz Naiko and his accomplice out of 450 population of the village is suspicious. The stance of the local population has not been reported yet. However, since 6 May 2020, despite the lockdown and curfew IHK is protesting against the fake encounter. First-time women and children are also accompanying the protests. Uncountable women and children have been injured due to the firing of Indian state terrorists over these protests. Being psychologically overwhelmed by these protests Indian Soldiers (feeling ashamed for writing assassins as soldiers) martyred a Kashmiri Mairajuddin Shah when he stopped he got out of his vehicle proved his identity on the check post, he was shot down when he turned back to his vehicle. Indians are of the view that he was shot down because he did not stop on the check post. While according to the eyewitnesses he was seen stopping on the check post and talking to the Indian dogs. On the martyrdom of Mairajuddin, people started protesting against Indian state terrorists. He was wrapped up into the Pakistani flag and laid to rest. During the funeral and burial, thousands of Kashmiri were present and chanting slogans “Long Live Pakistan”, “Kashmir will become part of Pakistan” and “Indian soldiers get out of Kashmir”. Many Kashmiris were hoisting Pakistani flags at the funeral. According to the Indian Media, hoisting Pakistani flags and chanting slogans in favor of Pakistan in front of Indian soldiers is the severe blow to the Indian Parliament's decision of 05 August 2019. This has proved that the first and last option for Kashmiris is Pakistan, not terrorist India…