Pakistan Army Soldiers and Officers Who Sacrificed Their Lives for The Motherland! 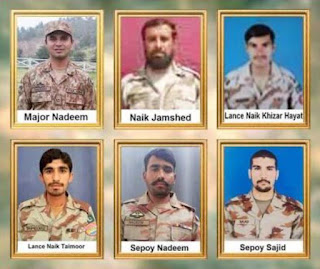 On 19 May 2020, 6 Soldiers of Pakistan Army on patrolling duty were martyred while returning to their base camp in Pir Ghaib area of Mach, Balochistan as their vehicle hit the mine laid by Indian backed terrorists. The martyred included Naib Subedar Ehsan Ullah Khan, Nike Zubair Khan, Nike Ijaz Ahmad, Nike Maula Bakhsh, Nike Noor Muhammad, and Driver Abdul Jabbar. The second incident of terrorism took place in the Kech area of Balochistan when Sepoy Imdad Ali was martyred during the exchange of fire while on patrol duty. Before this on 8 May 2020, in the area of Kech a patrolling FC vehicle was hit by the mine martyring Major Nadeem Abbas, Nike Jamshaid, Lance Nike Taimoor, Lance Nike Khizar Hayat, Sepoy Sajid, and Sepoy Nadeem. In the month of May, one Commissioned Officer, one Junior Commissioned Officer along with 13 sons of the motherland sacrificed their lives. This is not new for the officers and soldiers of the Pakistan army. The current series of sacrifices started as a result of the American invasion of Afghanistan in 2001, puppet govt. of Hamid Karzai, the pivotal role was given to the Northern Alliance and the freehand given to India in Afghanistan. India established her consulates in the provinces adjacent to the Pakistani border. Within one year of Indian establishing consulates in Afghanistan, with the support of Afghan govt. and Afghan Intelligence Agency NDS along with RAW organized terrorists under two different flags and motto i.e. Baloch Insurgents for separation of Balochistan and Tehreek Taliban Pakistan (TTP) under the motto of the imposition of Islamic Shariah in the whole country. Centuries-old mountainous passes which were used by the tribals were exploited by India and other anti-Pakistan powers to establish terrorist camps in tribal areas for waging terrorism within Pakistan. After these enemies of Pakistan played the bloody game through their proxies in Balochistan and martyred a large number of tribal elders who were against their presence in Pakistan so that no one dares to challenge their presence in these areas. During this time incidents of abduction of Pak-Army soldiers, torturing them to death, cutting down their heads, and playing football with their heads were recorded and spread over the internet. All this was done in the name of the imposition of Shariah. 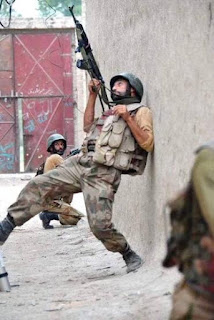 Situation of Balochistan was not any better. Here Pakistan army was termed as a tyrant army capturing Baloch resources and responsible for non-development and poverty in Balochistan. The irony of fate is that few pro-Indian elements within Pakistan protected these terrorist activities just point-scoring in the name of the Baloch fighters fighting for their rights. They also covered TTP terrorism as a result of the Pakistan army’s disputes with Afghan Mujahedeen. During this time hoisting Pakistani flag or fixing a picture of Quaid-e-Azam Muhammad Ali Jinnah was equivalent to inviting death. Those Baloch leaders who remained in power during all the governments and exploited funds issued for the province were also, on the one hand, supporting insurgents while on the other hand kept busy in procuring more funds from the Federal government in the name of development and restoration of peace. One may remember the sad day of 15 June 2013, when Indian backed terrorists attempted to destroy the last residency of Quaid Azam at Ziarat. Although Quaid’s residency was soon restored, however, the purpose behind blazing the building was to give a message to the world that Pakistan has lost control over Balochistan and it is ruled by insurgents. 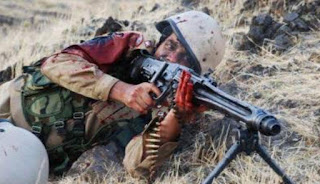 Pakistan Army, ISI and other secret agencies of Pakistan army started operation against Indian sponsored terrorists in Balochistan as well as tribal areas; no one has ever imagined that these terrorists launched by anti-Pakistan forces and handled by India will be defeated who were not only trained for gorilla war but also had a great number of modern weapons. These terrorists not only had an undisrupted supply of weapons from Afghanistan but also technical support to monitor the movement of the Pakistan army through satellites. Despite all these terrorists were defeated. The basic reason behind the victory of Pakistan was the uncountable number of sacrifices of Pakistan army soldiers and officers. No one can ever imagine how many soldiers and heroes of the motherland left their real mothers in tears to go into the shower of the bullets and sacrificed their lives. When one son of the soil fell down embracing martyrdom other one came ahead to face the enemy. This is still going on because the country is still facing the war. Despite all these few Pakistanis are busy criticizing the army as a national security agency. 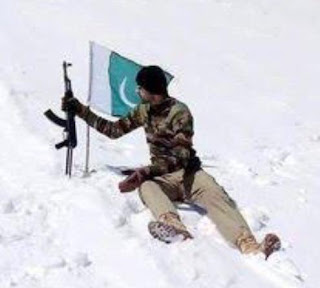 Few days ago an incident that took place on Hazara Motorway in which a woman pretending to be the wife of a Colonel used bad language with the Police deployed on the barriers; exploiting this clip some people over the social media criticized the Pakistan army even saying that “This army will free the Indian Held Kashmir”. Some criticized the army for such training. The criticism of the Pakistan army was done mainly by the people supporting opposition parties and few intellectuals as well; they forget that what would be emotions of the mothers and widows who receive blood-stained uniform and flags in spite of their loved ones. Many innocent children of these martyred soldiers are confused that why their mother is crying while receiving the blood stained uniform and why their father has not returned. All those busy in criticism from the ease of their homes should not forget that when the country was in the clutches of terrorism and they feared going out due to bomb blasts the officers and soldiers of Pakistan army and unsung heroes of secret agencies were fighting with these terrorists and they are still doing…

Email ThisBlogThis!Share to TwitterShare to FacebookShare to Pinterest
Labels: Baloch terrorists and India, Indian terrorism in Pakistan, links between TTP and RAW