Indian Media Concerned for Sind and Balochistan In Spite of Ladakh 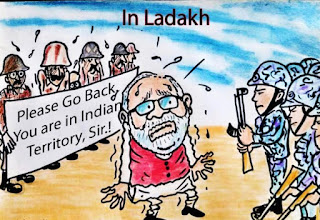 This is astonishing that Indian media is telecasting stories about under development of Sind and Balochistan in spite of keeping their public updated about defeats of Indian Army in Ladakh in the hands of Chinese army. In this regard, Altaf Hussein who besieged Karachi for last few decades through his terrorist wings in the name of linguist disputes has appealed American Members of Congress to present the bill for separation of Sind and Balochistan. Altaf Hussein has said that 90% of the public of these provinces want separation from Pakistan in the form of a separate country consisting of Sind and Balochistan. Few days ago India media was telecasting slogans of defeating China; clips of Indian parades of Indian media were being telecasted, movement of Indian Army towards Ladakh was portrayed as full fledged war has been started between China and India. Indian analysts most of whom were retired Indian army officers had defeated China many times in their analysis. However, the ground reality is that news of defeat of Indian army in the hands of Chinese army are being shared over social media. Around the Galwan valley at the height of 16-18 thousand feet an area of approximately 60 kms has been captured by Chinese. Since these videos got viral over the social media, Indian Media is dead silent. Not only Indian media, Indian govt. and Defense Ministry is silent as well. Indian rulers are neither confirming nor rejecting these videos. There were the news that a small village of Daulat Baig situated at the end of Ladakh situated in the right of Aksaichen and left of Siachen. India had deployed a battalion of Indian army to protect this village. However, keeping in view the defense importance of this area, India increaed its strength from a battalion to brigade. Not only this India constructed state of the art roads and bridges across the Shyok river. This road named as Darbuk Shyon-Daulat Beg Road was opened few days ago. After the successful construction of this road India started threatening Pakistan to attack Gilgit Baltistan and issued maps showing Gilgit Balistan as part of India. Indian media also started telecasting the weather forecasts of Gilgit Baltistan as well. 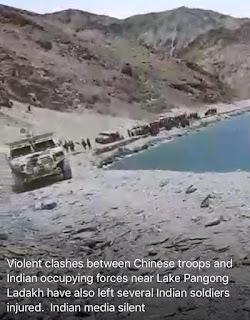 From the military point of view rapid excess of Indian Army to the Daulat Beg sector and increased deployment of Indian army in the area clarified the Indian nefarious designs. Indian army was planning to capture Karakoram pass 8 miles away from Daulat Beg. After successful capture of Karokaram Pass, Gilgit Baltistan would have been secondary target. With capture of Karokaram pass, land link between China and Pakistan would have been cut down cutting down the CPEC project as well. Indian PM Modi’s threats of stopping CPEC at any cost is on the record. Afterward remain limited to threats of capturing Azad Kashmir and Gilgit Baltistan. Meanwhile India started claiming that when she talks about Gilgit Baltistan she means her claims over Jammu and Kashmir whose part is Gilgit Baltistan. India has no dispute with China in this regard.
Although India cleverly tried to cover her nefarious designs but whole world had known that behind the objections over CPEC is America who considers as a threat to her interests and influence in the region as well as in the international politics. This was America who was inciting India to capture Karokarm Pass from Daulat Beg sector. India always failed to satisfy China over her military constructions in the region. The construction of road and bridge from Darbuk to Daulat Beg in Ladakh has been completed last year. Indian defense analysts are worried that neither China tried to stop the construction through power. Bridge was constructed successfully, Indian military started moving on the road to Daulat Beg. China remained limited to verbal objections over the construction of the road however, no practical measures were taken. Has China suddenly realised that India wants to capture the areas beyond the Daulat Beg in the months of May and March 2020 or wants capture Aksaichen. The answer to this question has been given by Lt. (R) General Harcharansit Sing who retired in 2009 and also remained GOC of Northern Command in these words that while removing the special status of Kashmir India forgot that the war of 1962 between India and China was due to Ladakh. In this war Indian army has to face uncounted number of casualities. In this regard Indian and Chinese troops engaged more than 35 times without weapons. In 2010 and 2017 the dispute increased to the war. Since cease fire of 1962 China has been demanding that India will not construct bunkers and other military installations in Ladakh. Despite this India continued construction of roads. Especially after capturing of Kargil by Pakistan India started construction of network of roads in Daulat Beg. China did not object over the construction of roads but increaed her number of troops to such an extent that in case of any dispute China can catch India from neck and this has been recently shown as well.

The first defeat of India and Indian army is that they remained unaware of Chinese military movements and war preparations. The second blunder was committed by India by removing the speical status of Kashmir which provided reason for China to violate all the deals that were stoppping her from capturing Ladakh. Indian General has said that silence of Modi establishment and military leadership as confession of the blunder regarding Kashmir. 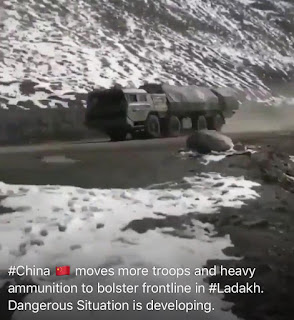 Indian govt. has nothing to satisfy Indian public over the capture of 60 kms of Ladakh area to China that she can present over the media. India has only one way to avoid public criticism by starting propaganda against Pakistan. Tell her public that people of Balochistand and Sind are living below the poverty line. In order to decieve Indian public interviews of Hussein Haqqani are telecasted. Through the analysis of Tariq Fateh notorious for anti-Islam and anti-Pakistan statement Hindu extremists are entertianed. Indian audience is entertained by the live telephone calls of Altaf Hussein that Sind and Balochistan are looking towards India for freedom. The groud reality is that world is condemning atrocities committed by Indian state terrorists in Indian Held Kashmir. Whether it is American Congress, British or European Parliament protests are staged against fake encounters and massacre of Kashmiris and absence of human rights and freedom. Kashmiris are being appreciated that they are continuing their struggle for freedom despite curfew since 05 August 2019…


Translated by Naveed Ahmed
at 8:26 PM