India Facing the Results of Aggressiveness towards Neighbors 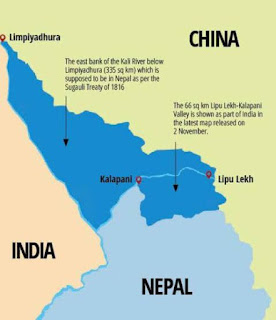 Despite being a small Hindu state in between China and India, Nepal is facing Indian imperialist designs for the last few decades. As Nepal is landlocked so she is forced to bow in front of India for her trade, food and other state affairs. If India stops the movement of vegetables, rice, and other eatables from India, Nepal would have to starve. In this regard India does not need formal order from Delhi establishment; in past India has experimented the blockade of Nepal through strikes of transporters and through mutual fights between the tribes living across the road joining Nepal with India and forced Nepal to make decisions according to the wishes of India in 2015. 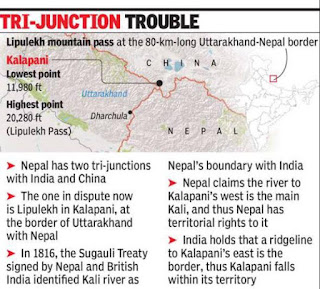 On 08 May 2020, Indian Defense Minister Raj Nath Singh opening ceremony of the Lipulekh Road 80 Kilometers inside the Nepali border, Nepal protested against it. As a reaction of the protest, New Delhi issued a new map of the India and Nepal border in which the disputed area was shown as the part of India. This created hatred against India in Nepal. Nepali people took to the roads chanting slogans against India. Nepali govt. also protested against the issuance of new maps and termed it as aggression against Nepal reprinting the mutually agreed maps that were also published by India before 08 May 2020 as well. India took the stance that she constructed the dispute road for Hindu pilgrims so that they can easily visit the religious areas adjacent to Chinese borders. Moreover, Indian govt. termed the area of the road as disputed area between Nepal and India and rejected the stance of the Nepal. In past, Indian Defense Analysts has been claiming this road as very important road for defense against China. If we look at the map, after construction of the road, India has included the 350 kilometers Nepali area of Kalapani into India. According to Indian Defense Analysts this road and area will provide supremacy to India in case of war against China. 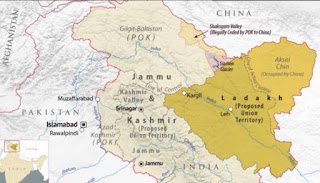 The silence of the world over the illegal capturing of Nepali area despite protest from Nepal shows that everyone is chained by their interests with powerful countries. Although International Media gave coverage to the dispute between both countries but neither UNO nor any powerful country termed Indian aggression as a violation of international laws. In Nepal, many students during protests took the oath that they will take up weapons if Indian army attacked Nepali areas. The protests in Nepal were rejected by Indian BJP terming them as Chinese planted protests. On 09 May 2020, Indian newspapers published threats to China of BJP extremists as highlights while in their talk shows they captured China many times. Another Indian anchorperson claimed that soon the Indian army will capture Azad Kashmir and Gilgit Baltistan. After this China will have to bow in front of India for access to Gwadar. Few days ago these extremist Indian anchorpersons were terming the opening of Lipulekh road as a symbol of India-Nepal friendship. All of them were silenced by the video of a Gorkha soldier of Nepali army; in this video, he threatened that the Gorkha tribes will attack Indians present within the Nepali area. Indian politicians, army leadership, Hindu extremists and media had never thought that such a reaction will be seen from Nepal on Indian aggression. 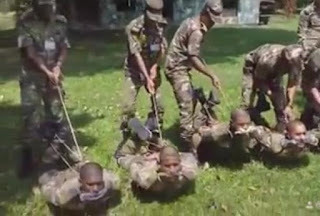 On the other hand in Ladakh China has taught a tough lesson to India. In the area of Ladakh the video clips of Chinese and Indian soldiers pushing each other and verbally fighting each other often get viral but the recent situation is different in the way that Chinese soldiers first of all asked Indian soldiers to get out of the area where Chinese have now deployed heavy artillery. Indian soldiers said that they will not leave the area at any cost and threatened Chinese soldiers. After this Chinese arrested the Indian soldiers, shaved their heads, tied them with ropes and pulled their faces upwards so that they can be identified in the video clips. This video was shared on social media. Such a pitiful treatment of Indian soldiers was shameful for Indians and Modi showing the weakness of the Indian army. India that had planned to attack Pakistani Gilgit Baltistan through Ladakh. 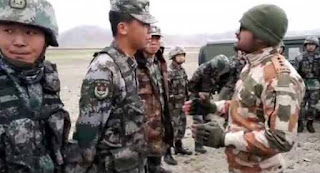 China has given a clear message to India by constructing posts and bunkers inside India that enough is enough. Indian threats and conspiracies will not be tolerated anymore. Chinese President has ordered the Chinese army to remain prepared against India. India has ordered Army Chief General Manoj Makkand to take control of the deteriorating situation. He has said that India and China both are equally responsible for the deteriorating situation in Ladakh and claimed that the situation will improve soon. This statement is a slap over the faces of those extremist Hindu leaders, retired Indian Generals and TV anchors who always keep daydreaming on Indian media that they can teach a lesson to China and Pakistan simultaneously. Now they are condemning their army chief for supporting China. 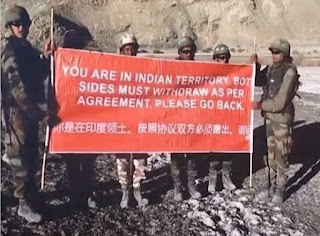 Chinese Media has made it clear that India has violated the agreement between China and India over Ladakh by removing the special status of Indian Held Kashmir and Ladakh on 05 August 2019. Chine has claimed over Ladakh as the Chinese area. This was also acknowledged by India as a disputed area but now Indian cannot be given any leniency after removal of special status. It is now proved that India has not only aggressive plans against China but for Pakistan, Bhutan, Nepal, Bangladesh, and Pakistan and this is acknowledged by the members of SAARC as well. Only those liberals in Pakistan do not accept this reality who are paid by India and consider as the Mother of Democracy in spite of Mother of Extremism and terrorism claiming that Pakistan army is the reason behind India Pakistan disputes…

Translated by Naveed Ahmed
at 2:33 PM