Regarding Pak-Afghan relations, 14 June 2016 will be always remembered because on this day, Pakistan initiated the work of erection of barbed wire fence, by constructing Gate 37 meters within the Pakistan from 0 point at Turkham. The purpose of the construction of gate and erection of fence is to check the illegal crossing of the border by terrorists. Pak-Afghan border is 2430 km long. Afghan forces started unprovoked firing on Pakistani forces martyring Major Jawad Ali Changezi. After destroying the Indian sponsored terrorists in the tribal areas, it was realized that unless Pakistan stops infiltration of terrorists from Afghanistan by erecting fence and constructing gate in order to check the visa and other travel documents as per International Laws, terrorists will keep martyting innocent Pakistani by operating from Afghanistan. 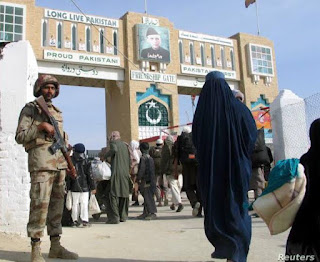 Pakistan informed not only Afghan leadership but Command of American Army that next time not a single person will be allowed to enter and exit Pakistan without proper documentation. Because terrorists were continuing terrorist activities across the border through their supporters in by crossing the border through traditional narrow passes on the border or Turkham. Afghan govt. was not ready to take any action against these Indian sponsored terrorists. 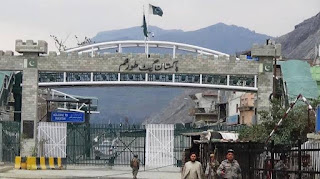 The sudden attack of Afghan army on the troops of FC deployed on the supervision of the erection of the gate through heavy machine guns proved that Afghan govt. along with India exploiting Afghanistan as a second battle front against Pakistan were unhappy over the establishment of Border Management and erection of gate. These anti-Pakistan powers were unhappy over the defeat of their trained terrorists and their strongholds in the tri bal areas that were considered as undefeatable. Their trained terrorists were either killed or fled to Afghanistan to take refuge from their handles in Afghanistan. Moreover, these powers were afraid that if Pakistan succeeded in erecting the fence and imposing the Border Management System than it will impossible for them to continue terrorism and lawlessness in Pakistan. Pakistan army and nation has not defeated the terrorists without any sacrifices; nation paid the price of the victory in the form of thousands of soldiers and offcers of Pakistan army. 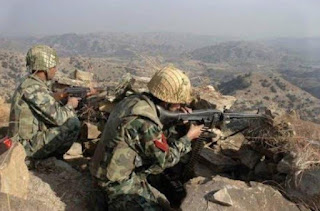 This success cannot be sacrificed for the wishes of liberals, NGOs working on foreign funds, leaders exploiting the nation in the name of Pakhtuns, intellectuals active against Paksitan army in the name of Freedom of Speech and Indian and Afghan terrorist secret agencies. So pakistan decided to erect fence and started work over it. Despite martyrdom of Major Jawad Ali Changezi, gate was constructed over Turkham border. The second phase was the erection of barbed wire fence over Afghan border. In these 2430 km long border, there were few hard to pass mountains as well as snow covered mountains 1200 feet high from sea level. World saw the scene when Pakistan army deployed its tanks in front of Tora Bora mountains in the Ningarhar province of Afghanistan at the point of Koh Sufaid; deployment of tanks at such high and narrow mountains was not only astonishing for international defense analysts but also a new record in the war history.

Pakistan army was forced to deploy tanks at such difficult places because Afghan army along with Tehreek Taliban Pakistan terrorists was busy in attacking Pakistan army soldiers busy in erection of the fence. Although these terrorists were always given a befitting reply by Pakistan army. Pakistan’s plan was not limited to only erection of the barbed wire fence but construction of 843 forts as well; most of the work has been completed. These forts were constructed to check the activities of the Indian RAW terrorist working under cover of Indian Consulates in Afghanistan. These RAW agents along with Afghan govt. and forces are trying hard to create their supporters and facilitators in tribal areas to continue terrorist activities but Border Management System and strict patrolling over the border is greatest hurdle. 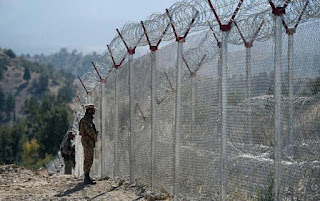 Keeping the situation in view, RAW and NDS tried to fuel nationalism through Pakhtun Tahaffuz Movement (PTM) exploiting the murder of Naqeebullah Mehsud. Although, foundation of PTM was laid in 2014 with the start of operation against terrorists in tribal areas so that if their terrorists are defeated by Pakistan army then PTM may be exploited to defame Pakistan army in the name of atrocities against tribal people and capturing tribal areas reviving dead horse of Greater Pakhtunistan. In 2018, PTM that got general acceptance by exploiting the murder of Naqeebullah with the support of pro-Indian liberals, now is not ready to take the name of Naqeebullah Mehsud. It is limited to the protests and seminars out of Pakistan just like Indian sponsored Baloch Liberation Army. These protests and seminars has also been haulted due to Corona Pandemic across the world. However, PTM is trying to defame Pakistan army for the murders over family disputes, terrorist attacks from Afghansitan in Paksitani areas etc. the most shameful fact is that few media personalities of Pakistan in the name of Freedom of Speech are busy in minting dollars from India by supporting PTM propaganda. This is the duty of the Pakistani nation to keep an eye over the ground realities and check the enemy propaganda…

Translated by Naveed Ahmed
at 1:29 PM