Pakistan Should Support China Against the American Alliance 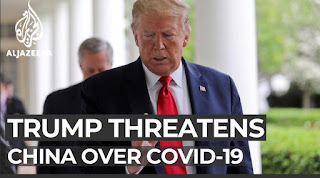 Donald Trump started trade wars against China as soon as he came into power. this was the biggest attempt to slow down the Chinese Economic Development after creating hurdles for China's sea routes by USA, Japan, Philipines and India especially for the transportation of oil. The decades-old terrorism in Pakistan was also part of this conspiracy so that China's access to Pakistani seaports could be stopped. The Corona Pandemic broke down in November 2019 in the Chinese province Wuhan which provided a chance to America to seclude China on the international level alleging China for spread of Corona Virus. A well-planned propaganda campaign was launched over the social media that China has destroyed American supremacy across the world. Such propaganda messages became viral in the different languages of the world on social media so that the international community can be forced to believe that China is behind the Corona Pandemic. from Facebook, Twitter, Instagram to WhatsApp there is not a single social media service over which this propaganda message has not been shared in which China has been blamed to spread Corona virus. this propaganda war was not one-sided. in the conspiracy theories, this was also said that Corona virus was transported to China by American soldiers who participated in the war games at Chinese province Wuhan. Many notable columnists and analysts wrote the articles over the conspiracy theories. Many diplomats gave video messages supporting conspiracy theories as they were scientists. Some researchers raise concerns over the old movies regarding virus pandemics, novels, and even prophecies of Nostradamus. 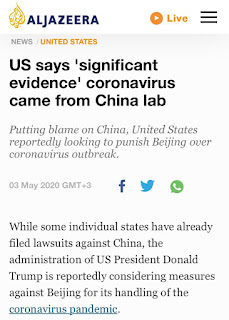 On the one hand social media was being exploited to form anti-China minds across the world while on the other hand Corona pandemic after claiming thousands of lives in Wuhan spread across the western countries and The USA. during the whole situation, Trump has expressed his hatred against China by terming Corona as the Chinese Virus. Andrew Cuomo, Governor of New York was the first person to object the Trump's statement; he was of the view that Trump should avoid blaming others on the basis of race, Trump should take steps to stop the spread of Corona in the USA and providing medical facilities to the infected patients. Trump for whom everything is wealth continued his criticism and in spite of taking Corona seriously just repeated that all is well in America. Corona started spreading havoc in the USA after Europe. As a reaction, Trump blamed the WHO for favoring China and not taking any steps to stop the Corona and suspended the funds for the WHO. this was a very extreme and dirty step taken by racist Trump. American media disclosed the report of the secret agencies sent to Trump on 31 December 2019. in which Trump was requested to take emergency measures to stop the spread of Corona in China. After disclosure of this report, the Director of US Centres for Disease Control disclosed his telephonic talk on 03 January 2020 with his Chinese counterpart and the details that were sent to the White House. Keeping in view the non-serious attitude of Trump regarding Corona, Trump's special advisor Peter Navarro wrote an urgent memo to Trump, urging him to take emergency measures. When this memo was published in the media, a journalist asked Trump during a Press Conference regarding the memo; Trump denied having read or seen any report or memo. 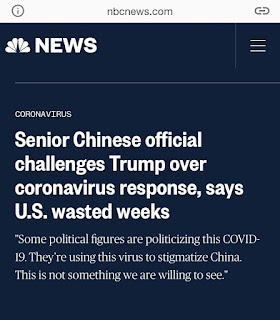 First patient of Corona was reported in America on 21 January 2020 and first death due to Corona was reported on 26 February 2020. On 24 February 2020, Trump tweeted;
"The Corona Virus is very much under control in the USA. We are in contact with everyone and all the relevant countries. CDC and World Health Organization have been working hard and very smart."
At that time Coronavirus has become an important issue; the number of infected persons has reached 0.7 million while the number of deaths is rising sharply. WHO has already declared that New York is the center of the Corona Pandemic. American public especially supporters of the Republican Party are not ready to accept the bans imposed by the lockdown. Racist Trump has been seen sometimes apologizing from China for terming Corona as Chinese virus and sometimes requesting China for Masks and ventilators. After one week Trump started blaming China for spreadingCorona virus and threatened China to be ready for the consequences. Italy and France have also demanded China to pay for the damages due to the Corona. 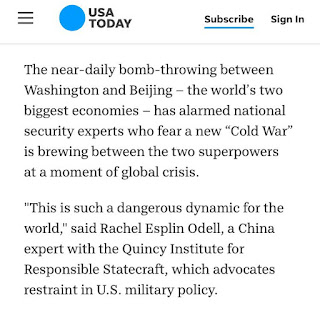 Chinese living in Australia has been banned from shopping and they have been tortured by Australian racists as well. American Media blames Trump for spreading Corona in the USA. American medical experts also say that the non-serious and business mindedness of Trump has made Corona a life threat for Americans. Professor of Columbia University and Director of Centre for Sustainable Development, Jeffrey Sachs has criticized Trump,
"Trump repeatedly praised China during February, only turning on China when the situation got tough in the US. Unlike China, which turned to public health experts, Trump turned to Vice President Mike Pence and son in law Jared Kushner. Thousands of Americans are dying unnecessarily as a result and we are still far from any coherent national plan." 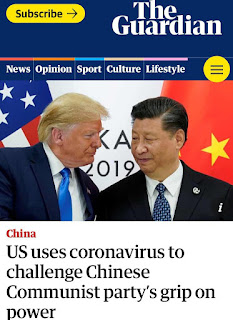 Now American Defense and political analysts are expressing concerns that Trump, Republican Party and other White Racists may take any extreme step to avoid their foreseen defeat in the upcoming elections. They are terming Trump's statements and the alliance of the USA, Western Countries, India and Japan as a siren of some big mishap. During such a situation the USA and her allies would try to force Pakistan to become a part of the American alliance. Pakistan should reject all such pressure and stand by the side of the time tested friend China. Especially terming China for the damages across the world could be an attempt to impose a New World Order by America and nothing else... 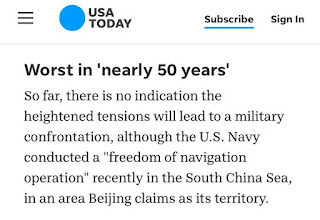