Kuwait Demands OIC to take steps Against Islamophobia in India 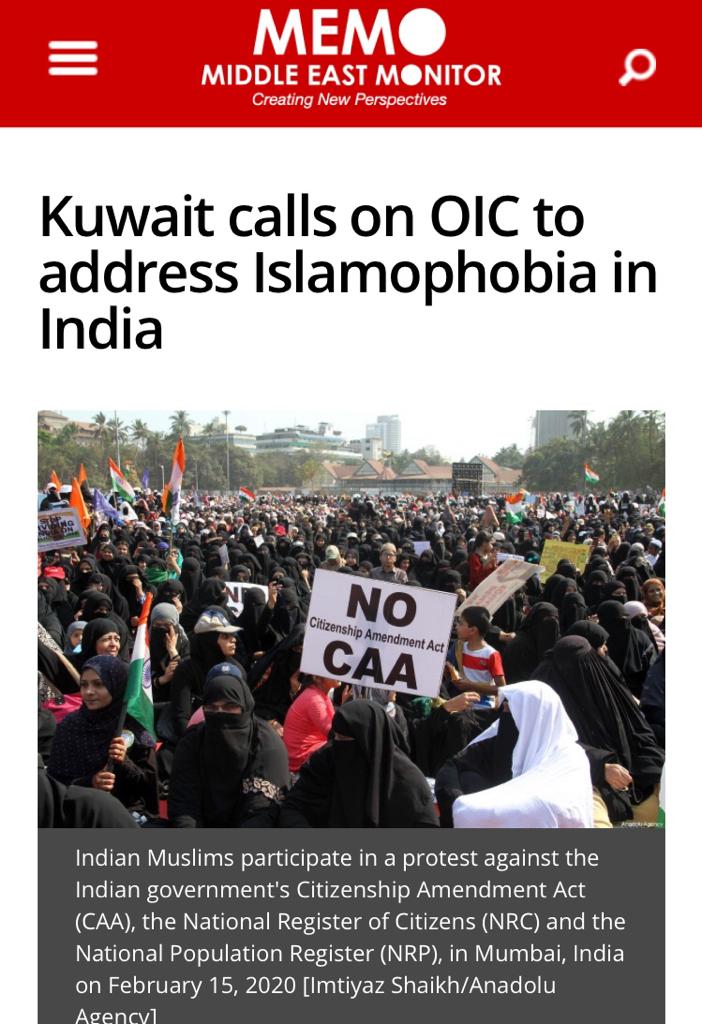 A few months ago on 24 August 2019, a historical welcome of the Indian Prime Minister was done by UAE. This was jolting for the Muslim Ummah, Indian intellectuals and journalists as well because on 05 August 2019, India abolished the special status of Indian Held Kashmir. Not only Kashmiris but the whole world was protesting against the slavery of 8 million Kashmiris on gunpoint. No one has ever imagined that Modi having the credit of massacre of thousands of Muslims of Gujarat in 2002 will be awarded the highest civil award. This helped India to neutralize the protests across the world in favor of Kashmiris. In this regard Samah Hadid, known as the flag bearer of Human Rights, wrote:

“With several Gulf States in an ever tightening embrace with Modi, human rights have been disacarded in favor of economic oppurtunities, India not only escaped international condemnation for its action, it is even shoring up support from Muslim allies, the plight of Kashmiris will not only be by Indians clampdown but also the apathy of those who long claimed to speak for them.” 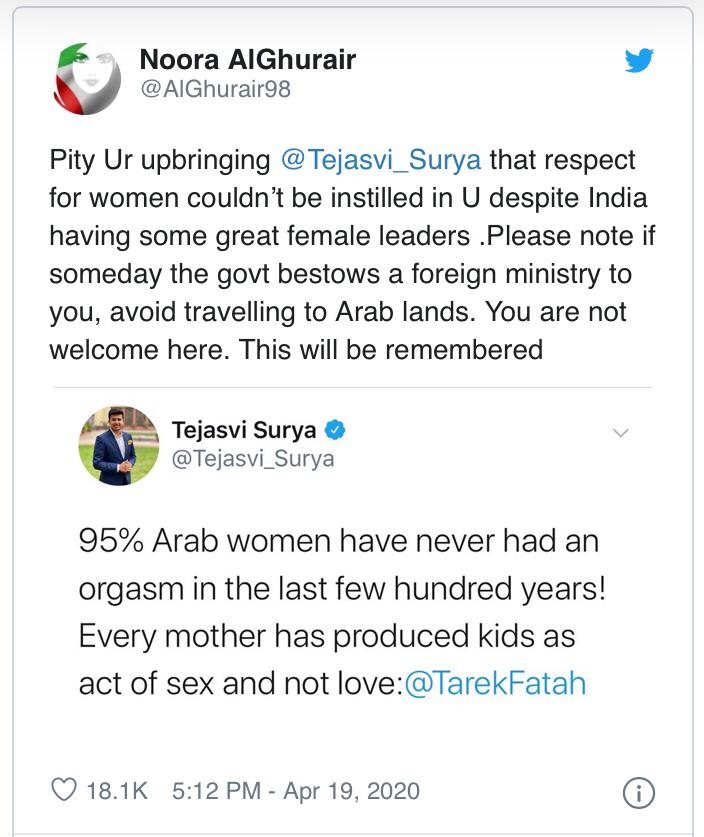 Then suddenly what happened that the Arab states that were considered by Hindus as their second homeland, voices are being raised against India. Hindus are being realized that they earn their bread and breadth from the homes of Muslims. There is a difference of only a few weeks that Pakistan was begging to OIC to issue a statement against India for inhuman acts against Muslim minority state terrorism of India in Indian Held Kashmir (IHK). Now the same OIC has been forced to demand India to protect the Muslim minority and stop Islamophobia because the public of Gulf states are not ready to tolerate the propaganda against Islam and tortures on Muslims of India by Hindu extremists. Not only the public, but the female member of the Royal family of Arab states were also forced to express her concerns against the Hindutva and Hindu terrorism in India. The Princess of UAE Hend al Qassim having three degrees from Manchester University of Britain and is an expert in the state affairs; when she saw the propaganda of Hindus in living in UAE for years against Islam and Muslims on twitter, she warned them to stay within limits on which she got such disgusting replies from Hindus that shows the gutter mentality of the Hindus. Out of such replies, one was written by Saurabh Upadhyay;


“What’s with the peaceful people and spitting? The new form of Jihaad custom made from 2020? I think they were still stuck 1400 years in past and dint”

Similarly Noora Alghurair is one of the businesswomen having 3 big companies including banks and other companies having thousands of employees. A big number of Hindus are employed by her companies as well. Despite being aware that Member of Indian Parliament elected from Karnataka Tejasvi Surya wrote in reaction to twitter tweet of Noora in which she condemned torture against Muslims showing the filthy mentality of Hindus and Hindutva,

“95% of Arab women have never had an orgasm in the last few hundred years! Even mother has produced kids as an act of sex not love”

“Pity your upbringing Tejasvi Surya that respect for women couldn’t be in U despite India having some great female leaders. Please, note if someday the Govt. bestows a foreign ministry to you avoid traveling to Arab lands. You are not welcome here. This will be remembered.”

The filthy the mentality of extremist Hindus can be imagined from filthy posts on social media. In this regard, OIC warned Indian Foreign Ministry through a written letter that ‘Indian Media is involved in the propaganda against Muslims. India govt. should stop the Islamophobia and torture against Muslims. Blaming Muslims for the spread of Corona Virus, torturing Muslims for being Muslim is highly condemned. India should take steps to counter this.’ While a young lawyer Mejbal al Sharik who is also working as Director of Human Rights in Kuwait wrote a letter to Modi to take steps against Tejasvi Surya for humiliating Arab women. He has also declared to raise the issue in the International Court of Human Rights as well.
The Muslims of KSA are also reacting against the hatred of Hindu extremists and propaganda of India and the torture of Hindus against Muslims. Saudi intellectual Khalid Al-Sufyan has demanded OIC, UNO, Security Council, and Human Rights organizations to interfere at once and take steps to protect the Muslims of India. However, the most severe reaction has been observed in Kuwait. Kuwait Council of Ministries expressed their concerns about increasing Hindu terrorism in India in the letter written to OIC to take immediate steps to protect Muslims of India especially when there is the govt. of Hindu Extremist BJP party.
One day after the letter, Minister for Religious Affairs Abdullah-al-Shoreka wrote this on his letter pad and tweeted it;

“Did those who commit crimes against humanity against Muslim in India and violate their rights think that Muslims in the world will remain silent about these crimes and do not move politically, legally and economically against them.”

the reaction of Kuwait was concerning for India. Indian Foreign Minister took the stance on this that Indian govt. has nothing to do with the propaganda on social media and twitter. Now this is the irony of the fate that on the day Indian Foreign Ministry’s statement regarding Kuwait was issued on the same day the USA declared India as the worst country for minorities…