Trump’s Silence over Massacre of Muslims in New Delhi 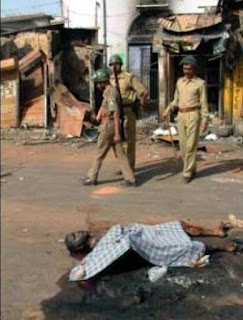 Kapil Mishra (BJP Extremist) threatened massacre of Muslims through Indian TV Channels. On 23 February 2020, he announced that if Muslim women protesting against the disputed bill at Shaheen Bagh does not end their protest sit-in, then Hindus will teach these women and other Muslims such a lesson that they will forget their religion. He said that once Trump’s visit to India ends, not a single Muslim will be visible on the streets of New Delhi protesting against the disputed bills. He threatened Muslims to return to their homes silently and bring the documents as required by the bill passed by the Indian Parliament to prove their citizenship as Indian. Otherwise, Hindu (state terrorists) have completed the plans to crush the Muslims. One day before this on 22 February 2020, Daily The Hindu and Daily Times of India published the statement of the Surendra Singh, BJP’s member of Parliament. He claimed that protests of Muslims and sit-in of Muslim women in Shaheen Bagh since 15 December 2019 against disputed bills as an International Conspiracy against India. Without taking the name of Pakistan he said that Muslim countries want to break apart India. He will not allow another Pakistan to be born within Hindu India. Muslim’s protest against disputed bills will be crushed iron handedly. On 10 February 2020, BJP member of India Rajya Sabha (Senate) Sudhanshu Trivedi blamed ISI for the protest and sit-in of Muslims claiming that the number of students of Jamia Millia Islami is 4000 only so how is it possible that on the call of the Jamia Millia Islamia 30 thousand women gather in the Shaheen Bagh for the sit-in. while in India not a Muslim Cleric or Religious party/organization has not given the call of protests or sit-in against the disputed bill. It was further said that people fueling protests have no political identity. BJP Senator further said that BJP and its militant Hindu youngsters are practicing extreme patience because Hindu leaders want that Muslims accept the bill otherwise not a single Muslim protesting on the roads will be allowed to leave alive. 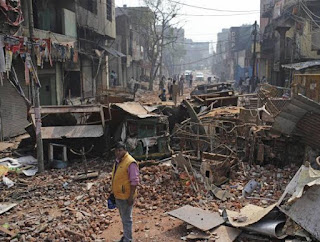 There is no doubt that Indian state Police is protecting Hindu goons and terrorists as we can see in the attacks over two universities of New Delhi i.e. Jawahar Lal University and Jamia Millia Islami University. Under the supervision of the Delhi Police, Hindu goons attacked female students and teachers with iron rods. Now this is clear that Indian Security Forces and Courts are controlled by Hindu goons and terrorists. Criminal Silence of Delhi Police and Courts over the Kapil Mishra’s threats of genocide of Muslims show that they are party in this state terrorism. Reacting over the threats, few journalists had made this clear that during the visit of Trump's Hindu extremists will take some actions against Muslims. On 23 February 2020, after the threats of Mishra, were telecasted on Indian TV Channels, Hindu goons started stoning the women staging a sit-in at Shaheen Bagh. The representative of NDTV also got injured along with other women and media representatives and women present in the sit-in. Police enjoyed the stoning and Hindu goons went away. 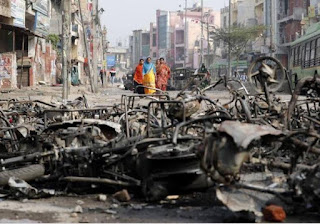 On the other day, goons of Bajrang Dal and RSS Hindu Terrorists attacked the shanty towns of Muslims in the North-Eastern areas of New Delhi chanting the slogans “Je Shri Ram”. In these attacks of Hindu State terrorists 7 people including one Head Constable of Police were killed. Police Constable tried to stop Hindu terrorists from firing and was killed by Hindu terrorists on the spot. When the news of the murder of 6 Muslims and burning of Muslim towns was telecasted, Chief Minister of Himachal Pradesh said that now only those will be given right of life who will chant Long Live India while those who are protesting against the disputed bill we will have to think about their future in Hindu India. After this, Hindu terrorists supported by Indian security agencies started attacks over the Muslim business points, homes and mosques. 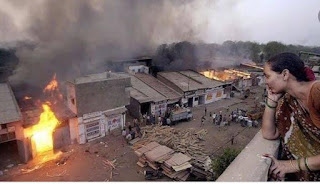 Hindu terrorists were armed with Petrol bombs, stones in the bags and iron rods. In the video clips, one can clearly see Indian Police along with Hindu Terrorists attacking the Muslims who tried to flee the attacked zones with iron rods, knives, etc. In one video clipping Indian Policemen are shoeing the dead bodies of Muslims laying on the Delhi Roads, putting rods in the mouths of the Muslim dead bodies. During the presence of the Trump in Indian Capital heavy consignment of Indian Police were deployed there. Despite such a heavy presence of Police massacre of Muslims in not understandable even by the Indian journalists. In the way, the motorcycles, cars, vehicles, hotels, businesses, showrooms, petrol pumps and shops of Muslims were ablaze, according to Indian journalists this is not possible without pre-planning with support of the Hindu Establishment. The representatives of Aam Aadmi Party who won the election in New Delhi told the media that Commissioner of Delhi is under the Federal Interior Minister not them. Commissioner did not respond to the Chief Minister’s calls while the Muslim genocide was being carried on. Chief Minister sent several e.mail messages to Indian Establishment and requested Indian Army’s support to control the Muslim massacre. Modi Establishment neither replied to the e.mails nor sent the Indian Army to control the situation. Leader of Aam Aadmi Party said that Kapil Sharma is responsible for the massacre of Muslims while Indian journalists also support the claims. Whether this was the sit-in of the Muslim women in Shaheen Bagh or protests at other places, all were peaceful. Than why massacre on such a big level. 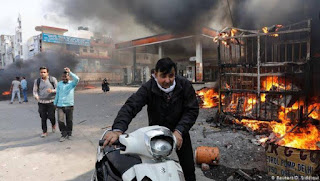 One month’s infant to 85 years old women is included in those burnt alive by Hindu terrorists. Indian media is still telling the number of murdered persons as 45 while more than 200 are injured. However, according to Indian media, the real number of deaths might be much higher. Because those shops, business buildings who were set on fire with petrol bombs, the people living in the upper stories did not get a chance to get out. All this was done to the Muslims living in the Hindu majority areas. The details of the war crimes in Muslim majority areas are not included in these numbers. The injured Muslims in the hospitals of India have hands or arms cut with the swords. Most of the Muslims died due to bullet injuries; it is yet to be decided that whether Hindu Police fired bullets or Hindu terrorists were armed with pistols and Police rifles. 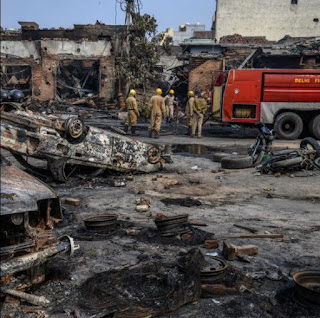 Not only Extremist and Terrorist Hindu Leadership of India but racist Trump is also responsible for the Muslim Massacre in New Delhi and being criticized by Human Rights Organizations. World should understand that Indian Hindu Establishment is Terrorist and Trump is the support of the Hindu Terrorist Establishment…

Translated by Naveed Ahmed
at 11:25 AM