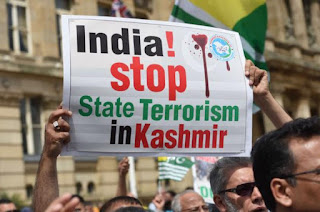 Blue Eyed Child of International Imperialistic Powers, India is under criticism by International Human Rights Organizations, International Print and Electronic Media even within India as well. Western Countries are demanding that India should allow their envoys to visit Indian Held Kashmir (IHK) in order to know the graveness of the situation in IHK. This matter has also been discussed in the UNO as well that India should restore basic Human Rights in IHK without any delay. Western Journalists have raised their concerns that by locking down Kashmiris in the name of Curfew, the shutdown of communication services, India Army is using RSS goons for the genocide of Kashmiris and raping Kashmiri women. These Hindu terrorists are uninformed as Indian Army, looting properties of the Kashmiris, breaking into Kashmiris homes, torturing men and women. A similar situation is being faced by the Muslims of India as well. Indian terrorist establishment of Modi is using RSS terrorists with the support of Local Police. In order to mentally torture the Muslims, men are tied and their women are gang-raped in front of them. The extremism of the shallow morals of Hindus is that such incidents are recorded in the Mobile Cameras and shared over social media. In these videos, the Hindu terrorists can be easily identified but Police are unwilling to take any action over such grave crimes that fall into the category of the war crimes. A representative for UN Mission for Human Rights in New Delhi, Nishta Satyam has demanded that UNO should hold an inquiry for the torturing Muslim Women during protests against disputed CAA as Modi The establishment is responsible for the torture.

These heinous crimes are being reported by the Western Media. According to these reports Indian Police is providing support to the Hindu Goons involved in the gang rapes of Muslim Women in Uttar Pradesh. There are also reports that Muslims are taken into the Police Stations for allegedly participating in the protests against CAA on the leads provided by the RSS Goons, in the Police Stations they are shown the orders of forfeiture of their houses by the Indian Govt. and black mailed either to pay the ransom or provide their women for rape. While continuously reporting such crimes, Western Media has realized that this was India who started the proxy war in Sri Lanka through Liberation Tigers of Tamil Eelam (LTTE) in order to enslave Sri Lanka. In this 26 years long terrorist war thousands of innocent men and women lost their lives. India used to deny armed interference in Sri Lanka but India has no reply for the uniformed Tamil Tiger’s Military, Navy and Airborne units operating from the coastal areas of India. Tamil Tigers had prepared special suicide bomber squads which mainly consisted of women and children. Most of the lives were lost in Sri Lanka due to these suicide bombers. 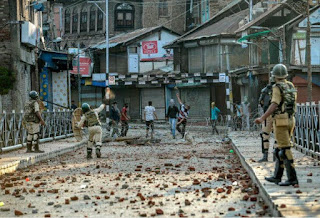 Now Western media has also realized that the terrorist war waged against Pakistan via Afghanistan was also on the similar pattern of Tamil Tigers. The only difference was that this time Indian terrorists were named Tehreek Taliban Pakistan (TTP). In spite of giving them military designations, these terrorist leaders were called Ameer and Vice Ameer according to the Islamic Environment of Pakistan. Tamil Tigers had established militant wings of specially trained women, however, due to the cultural restraints of Pakistan, it was not possible for India to use women in terrorism in Pakistan. Like Tamil Tigers it was not possible to provide helicopters and lightweight fighting aircraft because in case of shooting down of any of these jets would have meant to leave the evidence that TTP is operating from Afghanistan for which India and NATO along with the USA would have been held responsible. Just like the USA and NATO, India also did not want that they are termed as supporters of terrorism in Pakistan under the disguise of the imposition of Sharia. Now analyses are being done that in the proxy war of India in Sri Lanka 80,000 lives were lost out of which 3500 were Sri Lankan soldiers. While in Pakistan 70,000 lives were taken by Indian sponsored terrorists while 7000 Pakistani soldiers sacrificed their lives in this war against terrorism. 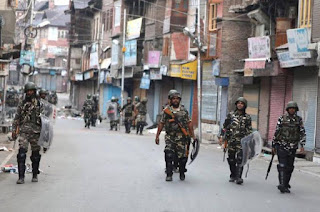 After launching TTP terrorists in Pakistan, India staged terrorist attacks in India for blaming Pakistan for terrorism; Indian propaganda was so much effective that the world was forced to accept it. In the anti-Pakistan propaganda India not only used her own media but due to the American interests American and Western Media also supported Indian Propaganda. This is the support of Western Media that India continued alleging Pakistan for terrorism despite the arrest of its state terrorist Kulbhushan Yadev who confessed in his video statement that he was given the task to wage terrorism in Balochistan and Karachi by Indian Govt. 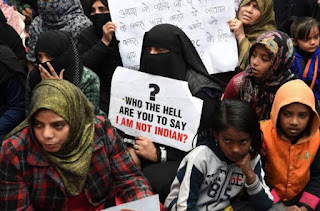 Now International Media is disclosing that ISIS has been sponsored and established by India into South Asia. According to the International Business Times’ report, in 2016 UAE deported 4 Indians for involvement in suspicious activities who were taken into custody by Indian Intelligence on their arrival to India. These persons were allegedly involved in recruiting militants within UAE for ISIS. UAE provided evidence to India as well. These persons were kept in a secret place for ten days and afterward released silently. Now it has been disclosed that Indians deported from UAE for having links with ISIS are higher in number including women as well. Indian media has also reported arrests of many Indians from Kerala for having links with ISIS. These people were arrested by Indian Law Enforcement Agencies in the name of investigations and afterward released silently. Out of these suspects, some have been seen in Afghanistan. According to Business Times, Modi’s Advisor for Security Ajeet Kumar Doval visited Iraq and Syria during 2015-16 several times and held meetings with ISIS leadership. ISIS representatives also met with the TTP representatives in the Indian Consulate at Jalalabad which was reported in UNO as well. However at that time due to American interests in India, these reports were ignored. 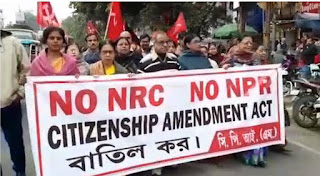 However, now when ISIS leadership in Iraq and Syria has been destroyed. The participation of veiled persons carrying ISIS specific logos on their banners in protests against CAA in different states of India is alarming. On the one hand the attack of Hindu extremists on the Jawahar Lal Nehru University with full planning torturing Hindu female students and Professors; few veiled female students accompanied Hindu terrorists for pointing out the specific students. Hindu extremists accepted the responsibility for the attack over the university claiming it as hatchery of communists. Hindu extremists claimed that they will clean up the university from communists. On the other hand, Akhil Gogoi worker of freedom of expression has been arrested under the fake allegations of supporting separation as he protested against the disputed CAA act. According to the National Investigation Authority books of Marx, Linen and Maozedong about the Chinese Revolution were recovered. However, Indian Police and National Investigation Authority did not arrest those who hoisted the ISIS flags in the protests. This shows that Modi establishment and Hindu terrorist agencies are planning some big conspiracy of terrorism against Muslims. Even Western Media has been forced to express concerns on such suspicious activities of Extremist Hindu Establishment…