Why British Hero “Oliver Cromwell” has been made a Villain in Pakistan?


While giving 5 times death sentence to General (R) Musharraf and in case of his death before being hanged, dragging his corpse Islamabad’s D-Chowk and keep it hanging for 3 days, British Dictator Cromwell was specially mentioned. Cromwell's dead body was exhumed in 1661, his head was cut apart, the head was hanged on the wall while the rest of the body was hanged with the chains. In the Pakistani court’s decision, the above-mentioned incident was quoted as precedent and termed Musharraf to be treated in similar manners. After the verdict of the Special Court, a wave of hatred and hateful analysis was started on social media. This cannot be coincident that Chief Justice of Pakistan, Justice Asif Saeed Khosa mentioned Cromwell in similar words as were used in the Special Court’s verdict during his remarks in the court. The details in the Pakistani court’s verdict and the analysis over the social media it seems that Cromwell is one of the biggest dark spots on the British history, the most hated character of English society and English villain.

Our intellectuals, our university teachers and historians no one dared to object that if Cromwell is a villain then why a documentary was telecasted by BBC Channel-4 in October 2002 in which a survey revealed that Cromwell was regarded as the 10 Great personalities of of Britain. Yes the Cromwell about whom during the hearing of the trial of treason against Musharraf, Justice Asif Saeed Khosa gave the comments on 26 March 2019 that a culprit cannot be allowed to control law and court on his own will and while heading the three-member bench, he mentioned the punishment given to the Cromwell. Respected Chief Justice’s comments and thinking clashes with the British History.

According to American Publication company Grollier Incorporated Encyclopedia in Published in 1963 Volume 3 Page No 390 the details of the Dictator Cromwell is that he was a brave General, a very pious and practicing Christian but he was against the influence of Church over the state machinery. After his initial education, Cromwell looked after his estate. In 1926, he became the part of the British Parliament. He was against the authority vested into the Church. He started a campaign to stop the Bishop’s government Episcopacy through power. In 1642, he became part of the civil war. Very soon he organized an army of Cavalry consisting of soldiers in high morale. They (Puritans) succeeded in securing to be identified as a force to be reckoned with. His army was known as Ironside. It soon became an organized army. In 1644 in the Battle of Marston Moor, he got the victory.


In 1645 Parliament acknowledged his army as the New Model Army. Under the command of Oliver Cromwell, his army defeated the army of the lords supported by King Charles-I and Church in 1645. The Minaret constructed in the commemoration of this historic victory is still present at the place of Naseby and this day is commemorated even today as well. Till the end of the 1st Civil war in 1645, Cromwell earned fame as a leader. He tried to convince King Charles-I towards democratic rights, but King was not ready for that because King had the support of the majority of lords in the parliament. Through the support of these lords, King attempted to over through the Parliament in 1648, once again the Civil War started. Scottish Army attacked England in the support of the King. Cromwell defeated Scottish Army at Preston forcing King for the negotiations. However, besides all this King and Church were not ready to give their powers to the Parliament. Lords in the Parliament were not ready to give up the support of King and Church in the favor of the democracy and rule by the public.
We Pakistanis made Cromwell a villain but the British history and the books written on the British Civil War never mention Cromwell as a character to be hated. In 1648, on the basis of power, he decided to start the accountability of King Charles-I and his loyal lords so that lawlessness can be controlled in London. This was the time of the Civil war in Britain. This was the war of the power between the public and the King and Church. King Charles-I was not ready for that during this war King Charles-I Cromwell and his army successfully toppled the govt. of King Charles-I. Charles-I was arrested and trialed by the court. On 27 January 1649, the High Court of Justice gave a death sentence to Charles-I. Court wrote in its decision:
He uphold in himself an unlimited and tyrannical power to rule according to his will and to overthrow the rights and liberties of the people.

On 30 January 1649, Charles-I’s was executed in the presence of a big gathering. This execution became disputed in British history as the war between parliament and King in the English countryside. Famous British Historian Samuel Rawson Gardiner wrote;
“With Charles’s death the main obstacle to the establishment of the constitutional system had been removed. The Monarchy as Charles understood it, had disappeared forever.
The civil war did not end even after this. The Lords supporting the Kingdom gathered in Ireland. They convinced King Charles-II to regain his Kingdom through their support. Cromwell had to fight with the Lords in Ireland’s cities Wexford and Drogheda. In 1951 Scottish Army attacked London. Cromwell and his army stopped the Scottish Army at Worcester and forced them to retreat. Seeing the clear inclination of Parliament towards King Charles-II Cromwell dissolved Parliament in 1653 and established a new Parliament supporting his views. In order to choose the members of the Parliament a Provisional Council was established. All these steps of the Cromwell were for the establishment of democracy against the Kingdom. He wanted democratic rule in Britain according to the Magna Carta. He died a natural death. 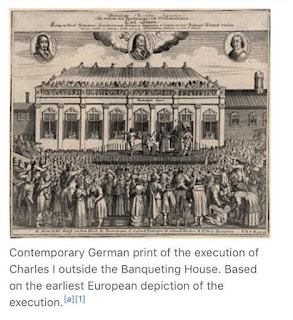 On 30 January 1661, the exhumation of Cromwell’s dead body cutting off his head and hanging his dead body was done by those elements who were against democracy and giving the rights to the public in Britain; this was not ordered by any court but the Lords who supported Charles-I and afterward Charles-II. Today's democracy in Britain is due to the sacrifices and war of the Cromwell. His dead body was afterward buried in the lawn of the Cambridge University’s Sydney Sussex School with due respect. A revolution started by the followers of Cromwell from 1688-89 resulted in the approval of the Bill of Rights taking away powers from the Church and the Monarchy.
Alas! Just in the enmity against Pakistan army and to provide support to the hanging of Musharraf’s dead body for three days we mutilated British history by posing Cromwell as a Dictator and villain. Despite many disputes and objections against Musharraf, the reality is that terming him a traitor as a Chief of Army is equivalent to terming Oliver Cromwell as the traitor of British Nation…