Unsafe Indian Nuclear Programs A Threat to the World’s Existence 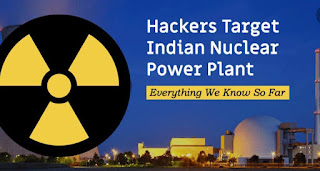 Muslim are killed by torturing to death as a result of the Hindu Extremism, they are burnt alive for not chanting JE SHRI RAM, Babri Mosque is demolished under the slogan of “ISLAM IS UNACCEPTAB LE”; world remains criminally silent, not so called secular states, western countries but Muslim countries also remain silent as well. Genocide of Muslims is conducted the umbrella of Hindu-Muslim riots; UNO damn cares. India gives a shit to the UN revolutions, crosses all limits of state terrorism and violations of Human Rights in Indian Held Kashmir (IHK),  world does not step ahead to give the right of referendum as they did in East Timur and Sudan. On 02 August 2019, India revoked the special status of IHK and imposed curfew on 04 August 2019 curtailing all the communications converting IHK the worlds largest prison on earth for the 8 million Kashmiris. They are denied to food, water, medicine and basic living facilities. International media termed this as human tragedy in an attempt to awaken the international community but in vain because India is the largest market for the world’s largest economies.
Leaving all these disparities aside, Kudankulam Nuclear Power Plant of India at Tamil Nadu was attacked by hackers and they succeeded in stealing important details. USA is silent on such a big security breach in Indian Nuclear Program. Britain, France, Germany and especially IAEA remained criminally silent; just because India is the biggest market? The biggest purchaser of weapons in the world? International powers get billions of dollars deals from India? Can we put the whole world at stake just for the damn interest of few countries?
World got aware of this security breach when hackers listed these stolen details for sale in the under world market. This was reported by the US magazine publishing news regarding nuclear technology. Investigations started in India which revealed that in 2019 from April to June hackers did multiple attacks and stole handful of the information and nuclear secrets. Subex a firm working on the Cyber security and networking equipment disclosed in a report 0n 28 October 2019 with reference to Pukhraj Singh, Cyber Security Expert of National Technical Research Organization (NTRO) that during the recent months several successful attacks have been done on Indian Nuclear Power Plant. They were unable to determine that hackers succeeded in stealing how much and what type of the information. These news were published by the Indian media and the website of the cyber security company. These reports were rejected by the administration of the Nuclear Power Plant as fabricated story. He was of the view that not a single section is linked with the internet therefore the chances of cyber attacks are ruled out.
The investigation board in its report on 30 October disclosed that Power plant was linked with the external internet but this was limited to the administration of the power plant only. The members of investigation team also accepted that computers of administration linked with internet had significant information about the power plant. Indian investigation agencies further disclosed that have failed to identify the hackers until now, however, a group of hackers Lazarus Group seems to be involved which may belong to North Korea. Said group has attacked the website of the Sony Pictures in 2014; in this attack cyber hackers had stolen the comedy movie made on the North Korean King Kim John. In 2016, said group attacked Central Bank of Bangladesh and stole 81 million dollars. When these news were reported, it was revealed that the group attacked 0.2 million computers in 150 countries.
Under the umbrella of the attacks of the said group India has attempted to cover its useless nuclear security system and cyber attacks on its under construction nuclear power plant so that its weakness may be hidden by blaming North Korean Hackers. In order to provide clutches to the lame excuse, Indians have based their blames on the report of a British Think Tank Royal United Services Institute (RUSI) in which it was disclosed that the North Korea is constructing Light Water Nuclear Reactor keeping in mind the technology used in under construction Kudankulam Nuclear Power Plant of India. 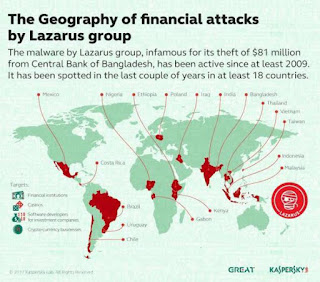 North Kore rejected the Indian blames saying that due to the international bans, it is useless for North Korea to achieve such technology through cyber attacks. An Indian analyst while defending India for the blames of cyber attacks on China, Russia and North Korea by USA and its allies said that Indian Nuclear Power Plant at Tamil Nadu is Thorium Based as an alternative for Uranium, however this cannot be used as nuclear bomb.
S.A. Bhardwaj, ex-Chairman Atom Energy Regulatory Board (AERB) accepted the cyber attacks of North Korea on Indian Nuclear Power Plant at Tamil Nadu but he denied that any information was stolen. The silence of IAEA on such a significant issue and security breach is astonishing. This is the duty of the IAEA to clarify the concerns prevailing in the world. Whether this is the stealing of nuclear information or the sale of Yellow Cake after being stolen from India and its sale either within India, Bangladesh or Nepal in the under world; all these are not new.
In July 2016, in the Kolkata few persons were arrested by Indian Police while they were selling one kilogram Uranium. IAEA protested over this report. IAEA also disclosed that an Indian Ship going to North Korea was intercepted by Taiwan Authorities, during the search big quantity of Aluminum Oxide and Yellow Cakes was recovered. According to International Media India is the most unsafe country regarding Radio Active Material. The Radio Active Material is supplied to unauthorized persons 52% via stealing while 48% via suspicious persons. According to International Media these suspicious persons are the officials and officers working at the Nuclear Projects of India. 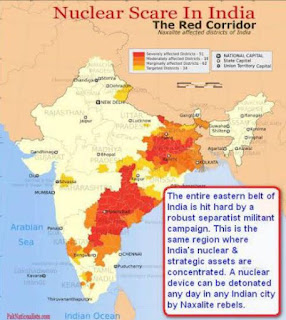 The reports of stealing of enriched Uranium have also been disclosed. After the increased influence of extremists Hindus over the govt., military and intelligence agencies there are concerns that Indian nuclear weapons will be used for religious purposes rather than security of India. Indian nuclear weapons have actually become Hindu Bombs. Extremist Hindus may sell these nuclear weapons, stolen sensitive information and enriched Uranium to such powers through underworld who believe in hatred rather then humanity. In such a situation International community should get out of the influence of its interests and pay attention to the threats to the very existence of the world due to security breaches in Indian Nuclear programs.