Establishment of Exiled Government of Minipura in London! 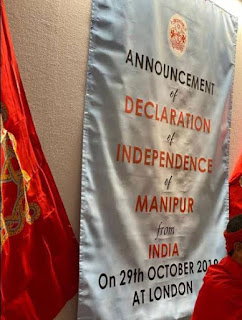 On 5 August 2019, Indian Prime Minister Modi and BJP who were trained by the Hindu extremist organization RSS, revoked the special status of Indian Held Kashmir (IHK) on the basis of their number of members in the Lok Sabha by changing the Indian Constitution. IHK was divided into two parts and the Indian army is attempting to make it a part of India on the gunpoint. The biggest hurdle in the way of Indian nefarious goals is the Kashmiri public. They are facing atrocities committed by Indian soldiers since 27 October 1947. however, 2 days before 05 August 2019, IHK was converted into a big prison and all the records of torture and inhuman acts were broken. 8 million people have been cut off from the outer world. They are not allowed to get out of their homes in the name of curfew. All these war crimes are not happening in the 16th or 17th century but in today's developed and so-called era of human rights. The world has become a global village due to the fast communication system. This state terrorism of India is the slap on the face of all those preaching democracy and democratic values across the world who used to appreciate India ignoring all the atrocities of extremist Hindus against minorities just because India claimed to be a secular and democratic country. The supporters of India not only included American and Western Media but organizations working for human rights and democracy. They were unable to assume that India will close the doors of life and human rights on the public of IHK by deploying 900,000 soldiers. In the way, Hindu extremist leadership and extremists defended the atrocities committed against Kashmiris and the immoral comments against Kashmiri women, created hatred and anger against India in the international media and community.

BBC and CNN recorded their protest against Indian state terrorism by telecasting documentaries of the situation in IHK after 05 August 2019. Western and American Print Media also attempted to awaken the so-called civilized nations fulfilling their journalistic duties. Before this was only being done by some of the Pakistani media, which was rejected by India as propaganda. Indian Opposition and educated Indians also rejected Indian governments revocation on 05 August but also termed it as a dangerous act against India. Seminars were held in this regard. Indian intellectuals, constitutional experts, Hindu scholars and lawyers that acts of terrorism against minorities in India, forcing Muslims to chant “Je Shri Ram” threatening either to burn alive or murder, state terrorism in IHK and revocation of special status of IHK is not restored, the insecurity among those states would increase who became part of India after the partition of India under a special agreement that their separate status will not be violated. Under this agreement Kashmir, a Muslim majority state acceded to India by Hindu Raja Hari Singh. Just like the IHK, the article 371 of Indian constitution Indian states Arunachal Pradesh, Assam, Nagaland, Andhra Pradesh, Goa, Manipura, Meghalaya, Mizoram, Tripura, Sikkim, and Himachal Pradesh the first reaction was observed from the Nagaland.
On 14th August 2019 the separatists of Nagaland hoisted the flag of a separate state of Nagaland and chanted the national anthem. This declaration of separation was not unexpected. With the revocation of the special status of IHK, the protest started in Nagaland and the public of these states were demanding restoration of the special status of IHK. When the protest of these states was not given any attention, Naga separatists declared on 10 August 2019 that they stage a gathering for the formal declaration of independence on 14 August 2019; after this Indian establishment started negotiations with the separatists. New Delhi demanded that they should take back their declaration of independence on 14 August, Indian will remove their concerns. Nagaland separatists demanded that in order to restore the trust India should remove curfew in IHK, restore the communication system than they will take back their declaration. This was not possible for the Indian establishment controlled by the RSS and Hindu extremists. Hindu extremists tried to stop the declaration through the power which resulted in the loss of lives of Indian army as well as Naga separatists but on 14 August 2019 the independence of Nagaland was declared and the flag of independent was hoisted as well. Indian govt. once again started the negotiation with the separatists. Nagaland was not ready to give up their separate flag. Moreover, they imposed the condition of the separate constitution for Nagaland for a truce. People of Nagaland not only want independence from Indian but increasing influence of Hindu extremists while India has once again planned to deceive them, however, they are not ready to be fooled in the hands of New Delhi once again.

The second jolt to the Extremist Hindu rulers was the press conference of Minpura separatists in which they declared Manipura as a separate state and declared the establishment of exiled govt. in London. They appealed to the world that they should follow the democratic values and accept Manipura as a separate state. It was told in the press conference that Maharaja Leishemba Sanajaoba has declared the independence from India and established a separate state council of Manipura. According to them, Yambeen Brien was declared as Chief Minister and Foreign Minister, Narengbam Samarjit as Defense Minister. During the Press conference, Chief Minister Yambeen Brien along with Defense Minister told the journalists that on the orders of the Maharaja they were working for the independence of Manipura since 2013. After getting asylum in London in September 2019, Maharaja decided that the time has come to declare independence from Hindu Extremist India. They told the journalists that while living in Manipura they were not able to declare the independence of Manipura. In such a situation they would have been arrested and inhumanly tortured to death and afterward they corpses would have been thrown away. They told the journalists that Indian state terrorists have murdered thousands of innocent people of Manipura after arresting them.

After Modi’s coming into power in 2014, the citizens of the states who acceded to India is given a lower status than Dalits. They further said that raising voice for human rights in Manipura for 16 years and staging hunger strike against the Black law, social worker Iron Charu Sharmila was gang-raped by Indian soldiers after which she protested naked out of the Indian army cantonments along with other women. These pictures reached the international community through the international media, which disclosed the reality of Shining and Democratic India and how minorities and citizens of acceding states are treated in India. They further said that they are going to represent the revolution of independent Manipura to the Quen of the UK. In Manipura, Maharaja was forced to expressed no link with the exiled govt. Cases have been registered against the Chief Minister and Defense Minister in Indian Held Manipura. However, in this way India cannot crush the freedom movements in Indian held states…