The atrocities committed in the Indian Held Kashmir (IHK) by Indian Army are known to the world because Pakistan Army with the support of the tribals tried to free Kashmir from Hindu Army in October 1947. This war continued for 13 months. At least India took this issue to the United Nations and the resolution for Kashmir through plebiscite. The cease fire took place between both countries. The goal of India to take the issue to UNO was to get time to crush Kashmiris and convert them into minority. India in spite of conducting plebiscite increased its military power in Kashmir and started conspiracies. Due to such conspiracies and violations of Human Rights in IHK, Pakistan and India fought 3 wars however, the Kashmir dispute unresolved due to apathy of the international powers and UNO. Despite criminal silence of world powers due to their interests with India, the stories of Indian atrocities and Human Rights Violations are published in the Western Media. Moreover, Kashmiris living in UK and other Western Countries also keep raising their voice over the Kashmir issue. Now in the way Modi has revoked Article 370/35A by getting approval from the Majority of Hindu Representatives in Indian Parliament as an attempt to enslave Kashmiris to the Hindu India. The population of more than 8 million Kashmiris including elderly, infants, injured and ill have been made prisoners in the hands of more than 800,000 Hindu State Terrorists. Kashmiris have been denied the right of communication in the name of curfew. They are denied access to eatables, water, electricity and education so that they accept Indian slavery. The media of the whole world is protesting against such situation. Human Rights organizations are also condemning Indian atrocities committed against Kashmiris. Rulers of USA, UK, Germany, France, Italy, Russia, China, Malaysia and Turkey have demanded to end the curfew, restore the human rights, free the arrested Kashmiris, and Kashmiri leaders and resolve the issue through negotiations. Although India is not ready to give a shit to these demands, however, in the way the Kashmir issue has been raised in last 2 months, people who do not know about the geographical location of Kashmir have become aware of the human rights violations in IHK. They are raising their voices for freeing Kashmiris. The situation is that Kashmiris are living a life worst than prisoners; prisoners are given food, medical treatment, access to courts; in IHK India has made Kashmiris prisoners on their own land and denied them all rights.
The situation of the people living in the Northern States of India is worst than IHK. World is unaware of the Indian war crimes committed there. As per the contracts between UK, these states wanted to remain as independent states, they are not ready to accede to India. Under the leadership of Quaid Azam, Muslims of India divided India on the basis of Two Nations Theory, but North-Eastern States of India did not have such ideology and leadership. Their leadership of that time did not call them Hindu, however, due to enmity with Muslims they supported Nehru and Congress. Nehru and Congress attempted to capture Kashmir, however, Pakistan succeeded in saving 1/3rd of Kashmir. The rest of the Kashmir in the control of India has been never accepted as part of India by Kashmiris living their or by Pakistan. That is why Kashmiris of IHK have succeeded to bring their struggle for freedom to such a point where India has become powerless. India cannot hide this from the world anymore. In contrast to this, whatever, Indian army is doing in the Northern states, world is unaware of that. Just like the Indian public, rest of the world knows the facts that are presented by the Indian media. Separation movements started in these states as soon as English left. In order to crush these separation movements Indian army crossed all limits, as a result the public of these states was also forced to take up arms. They were murdered and kept killing Indian soldiers.

Indian Northern states, Arunachal Pradesh, Assam, Meghalaya, Nagaland, Manipura, TiriPura and Mizoram are currently struggling for separation. Separatists have established their own administrative units. Especially in Nagaland, Minipura, Arunchal Pradesh and Assam separatists impose taxes on the public. They have their own armies and chain of command. In these states, Indian army kidnaps women from their houses, they are gang raped in the Indian army barracks, their mutilated corpses are afterwards thrown in front of their homes. No one raises voice for their rights in the world, Human Rights Organizations also do not raise voice for them. Indian army has all type of legal protection for all the atrocities they are committing. Hindu soldiers can kill anyone claiming him to be the accomplice of the separatists. They can enter any house anytime, those who resist are killed on the spot. Hindu state terrorist can keep anyone in torture cells for two years without any fulfilling any legal requirements. 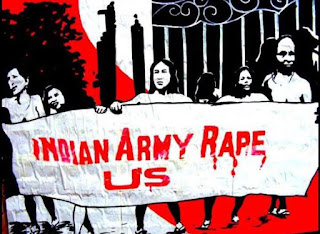 These states were also separate identity like IHK through Article 371/35-A. When the special status of IHK was abolished by the Indian Parliament, most of the protest was seen in the Northern Indian states. They had realized that BJP representing the Hindu Extremists has majority in Indian Parliament and Indian Parliament is in the clutches of the Hindu extremists who do not accept India as a democratic federation but they want to convert it into Hindu Desh. Northern states would be their next target. Just like in the Mehbuba Mufti and family of Farooq Abdullah, New Delhi made their loyals win the elections through fake votes and established their control. Now the leaders of these Indian states are raising the hue and cry who have been supporting Indian tortures and war crimes against the separatists for last 7 decades. Most concerned are the Nagaland, Mizoram and Jharkhand states about which Hindu extremist leaders of RSS have already pointed. In addition to the 7 Northern states, Goa, Sikkim, Himachal Pradesh and Jharkhand concerns are being expressed that Modi and BJP with the support of its terrorist wing RSS are considering revoking their special status given by Indian constitution.
In an interview given by Neera Chandoke, retired Professor from Political Science of New Delhi University in his even to ABNS said,


“This might set a precedent but Kashmir has been a priority for the Bhartiya Janta Party (BJP). Never before, a state has been downgraded. You don’t go to war against your own people. One can’t have a military solution to a political solution”.

Right after the inhuman acts in IHK, flag of separate Nagaland was hoisted and separation from India was declared. This was actually the reaction of the fear that prevails among the people of these states after seeing the state terrorism in IHK which has been increased since Kashmir has been declared as a part of India. This is the need of the hour to unveil the state terrorism of India in these states as well…