There is no doubt that India is facing diplomatic problems since she has converted Indian Held Kashmir in a place worse than prison. Whether it is the European Union or American Congress, Kashmir is being discussed as a big dispute. Despite the interests of the world powers with India, Kashmir dispute has become an important topic in the parliaments of the world powers and concerns have been expressed over Indian State Terrorism in IHK. Indian has no proper reply to the questions. The rallies and protests held within Kashmir against the curfew in IHK and expressing solidarity with Kashmiris have also created problems for Indian govt. On 05 August 2019, Kashmir was merged in to India and 0.9 million Indian soldiers imposed curfew in IHK. Despite the curfew and straight firings from Indians, Kashmiris have continued their protests against Indian presence. This has unveiled the Indian propaganda that militants in IHK operate due to the interference of Pakistan otherwise the majority of Kashmiris want to live with India. In such a serious situation there is only one solution for India that it should exploit its friends within Pakistan to fuel sectarianism, linguistic disputes, and regional disputes. By trying to give new life to slogans of Baloch, Sindhu Desh and Pakhtunistan India are trying to deceive the world that all these want separation from Pakistan especially Pakistan army portrayed as Punjabi army. According to this propagnadaPakistan army has been controlling resources in Sindh, Balochistan, and KPK. This anti-Pakistan conspiracy is not new. The foundation was laid with the Independence of Pakistan when Afghanistan denied accepting Pakistan as a separate country and few fuedals of Balochistan and NWFP chanted slogans of separation from Pakistan. 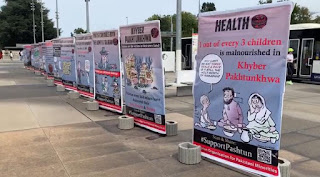 Khan of QIlat in Balochistan, Sardar Abdul Ghafar Khan alias Sarhadi Gandhi of NWFP started brainwashing the poor of the provinces who were also their subjects for Greater Pakhtunistan and Balochistan with the support of India and Afghanistan. Right just after two years of independence, Pakistan army was termed as Punjabi army, Punjabi administration and Punjabi politicians being responsible for the financial problems of these provinces.
On the basis of this conspiracy using the pro-Indian elements within the country and outside the country, Pakistan was disintegrated in 1971. Most of the Indian intellectuals and historians have recorded this in their books that through effective propaganda against Pakistan, India succeeded in disintegrating Pakistan. After the fall of Dhaka, the conspiracy was furthered in the name of Sindhu Desh while Greater Pakhtunistan and Greater Balochistan terminologies were introduced in KPK and Balochistan. The concept of the Greater Pakhtunistan combining areas of Balochistan and KPK was like old wine in the new bottle. Few new faces running anti-Pakistan propaganda were introduced but the real characters remained the same who worked against Pakistan in 1947. 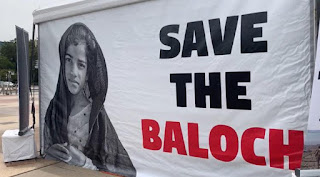 In the decade of the 1980s, a linguistic party Muhajir Qaumi Movement  (MQM) was established. Within no time on the footprints of underworld active in Mumbai it got arranged in Pakistan's coastal city and economical hub and got control over the economy, culture, politics, and society of the country under the leadership of Altaf Hussein. With the establishment of MQM, the use of automatic weapons was introduced into Karachi.
In Balochistan and KPK the armed conflict was started under two different ideologies. KPK and areas adjacent to Afghanistan saw a terrorist organization named Tehreek Taliban Pakistan (TTP) working under the slogan of the imposition of Islamic Shariah and started killing innocents. In Balochistan the killings were started in the name of the fight for the rights of Baloch people; terrorist activities were carried out all over Pakistan. All of these armed movements shared the conspiracy of the Punjabi army, Punjabi bureaucracy and Punjabi politicians. This was a very complicated war which was waged within Pakistan via Balochistan which engulfed the whole country in no time. 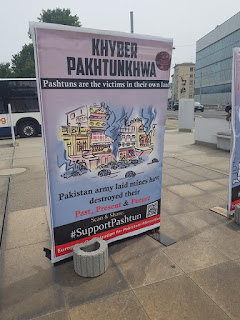 Then the world saw that MQM unveiled its original face and started anti-Pakistan activities openly. According to the international experts of war and defense, such a complicated would have left any country in the situation like that of Iraq, Libya, and Syria. This was the blessings of Allah that the Pakistan army destroyed the hideouts of terrorists established in tribal areas like that of cantonments and cleared the whole country from terrorism with bravery and zeal. 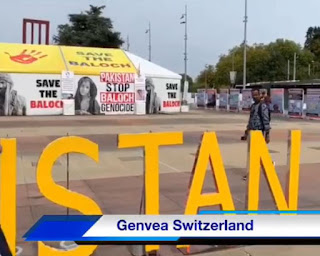 When it became impossible for the enemies of Pakistan to operate within Pakistan and execute terrorist activities, they started propaganda war against Pakistan. Rallies and protests were held in the favor of the Baloch insurgents, militants in tribal areas of KPK (which now have become constitutional part of KPK), supporting Muhajirs in Karachi in the capitals of the world powers like America, British and other European countries. In these rallies the first time Altaf Hussein, few Baloch traitors on self-exile and characters working in the name of Pakhtun Tahafuz Movement (PTM) were seen together. This did not stop here, Indian terrorist agency RAW acquired land in front of UN building on rent and established a marquee/tent for propaganda against Pakistan on a permanent basis. Here the fabricated stories of torture of the Pakistani army against Baloch, Pakhtun, and Muhajirs were told by the hired persons linked with universities. They were provided lodging in 5-star hotels. Afterward, the envoys of such hired traitors were arranged to meet with the heads of states or foreign ministers of important visitors coming to UN building. They used to convince them for separation of Balochistan, Pakhtunistan and Karachi from Pakistan. This propaganda is going for the last 5 years.

The walls of the marquee are full of anti-Pakistan and Pakistan army propaganda banners. Whenever, the procession of the Human Rights held in the UN building, this marquee termed as “Global Chair” sees increased numbers of guests. Hussein Haqqani is specially invited to this marquee to express his anti-Pakistan propaganda on heavy hourly payments. All these scenes are painful for the Pakistanis residing in Geneva. They try to counter it within their limited resources. Sometimes they arrange banners on the local transport highlighting the Indian atrocities committed in Indian Held Kashmir (IHK) and minorities. This is insufficient. Indian is spending billions of dollars for anti-Pakistan and Pakistan army propaganda which cannot be countered by Pakistanis living in Geneva. They have also established an Organization of Human Rights under the leadership of Rana Basharat Ali whose goal is to unveil the dirty face of India to Western Countries. They do not want money to counter Indian propaganda but supervision of Pakistani govt. they want support from Pakistani govt. and Media to overthrow the Indian established Marquee “Global Chair”.