In spite of Resolving Kashmir Issue Modi's Hilarious Allegation of Terrorism on Pakistan! 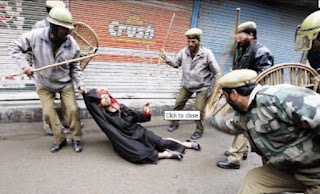 Modi has to face historical protests at Hoston, people chanting slogans Kashmir will Become Pakistan and Free Khalistan, Modi has to face a similar situation during his address to General Assembly of United Nations. The skyscrapers of Time Square was pasted with the electrical lights with the slogans in the favor of Kashmiris on the night of 25 September 2019. this continued till the 27 September 2019. the most famous slogan was "Let the Kashmiris Speak" which soon appeared on other buildings as well. this was not a slogan but a demand of those respecting Human Rights all over the world which came into being as a reaction of Modi's lie at Houston that all is well in Indian Held Kashmir (IHK). 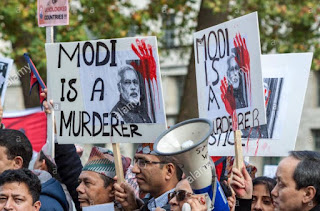 In the history of the annual meetings of the United Nations this was the first time that the eyes of the international and American Media were on the Pakistani Prime Minister Imran Khan. All big publishing houses and telecasting institutions were trying to procure interview of Imran Khan in order to inform wold about the real situation in IHK and stance of Pakistan. The appreciation of Pakistani stance in the USA over the lockdown in IHK and bans imposed on the Kashmiris created criticism against Modi and BJP in India. They are expressing concerns that when the whole world knows about the bans imposed in IHK, imposing of curfew and making IHK a mass prison, even Indian journalists are sharing clips of torture on unarmed Kashmiris; in such a situation why Modi needed to tell the lie, "All is Well" in IHK. 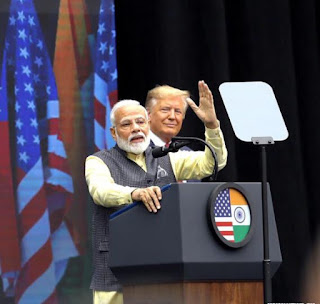 Modi tried to get the praise from the thousands of the Hindus at Houston Stadium by comparing the 9/11 and Mumbai Attacks that Pakistan is involved in terrorism which created a hilarious situation all over the world. Journalists are asking then when the USA who faced 9/11 attack has never alleged Pakistan, Pakistan was given the status of Non-NATO ally in the war against terrorism in Afghanistan rejecting Indian demands to attack Pakistan in spite of Afghanistan. 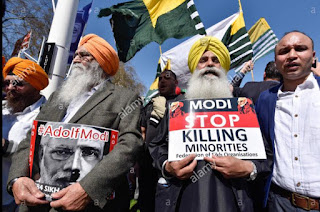 India created her influence in Afghanistan through her links with Northern Alliance and imposed terrorism in Pakistan in 2003. during the whole activity India launched strong propaganda campaign to declare Pakistan as the supporter of terrorism. Pakistani nation sacrificed 70 thousand Pakistanis including soldiers and officers of Pakistan army in the war against terrorism. These sacrifices of Pakistan have been acknowledged by the whole world. Due to these sacrifices, China and Russia declared peace in Afghanistan without Pakistan's cooperation as a dream. 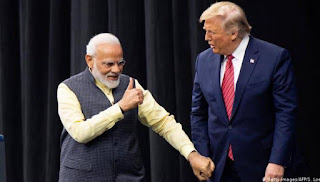 In February 2019, India staged another suicide bomb attack on an Indian Military convoy in Pulwama and alleged Pakistan for it as well. This was first of all rejected by the Indian Media and Opposition. Indian rulers have been alleging Pakistan for the terrorist activities of Indian Military and Intelligence agencies within India since the Parliament Attack in 2001 New Delhi. However, after 26 September 2008 attacks in which terrorists allegedly attacked two big hotels, City Railway Station, General Hospital and a far away situated Jewish secret complex; within few hours local media rejected Indian govt. allegations that Pakistan was involved in these attacks, they were of the view that nexus of Indian army, Indian Intelligence and Hindu extremists of India was involved in this attack. this was the initiation that Indian media is not ready to believe the fabricated stories of Indian govt. anymore. Indian rulers had no answer for the questions of journalists over suspicious killing of Hemant Karkare and his team of Maharashtra Anti-Terrorist Squad. At this time USA acknowledged Indian stance due to American problems in Afghanistan however, rejected the demand to allege Pakistan for this attack as well. 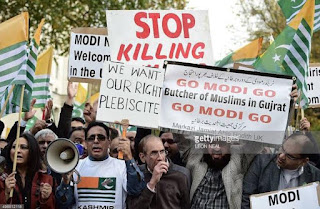 Similarly in January 2016, the Indian stance over its Pathankot Airbase was rejected as well. After such reaction from the world India decreased her propaganda against Pakistan. Moreover in the way Pakistan army destroyed the cantonement like hideouts of Indian supported terrorists in the tribal areas of Pakistan and wiped out their whole network, world started acknowledging Pakistan's war against terrorism. The irony of fate, Indian Prime Minister once again in the Houston while having arms in the neck of Trump once again blew the old trumpet of Mumbai attacks. In order to reinforce his stance Modi, linked Mumbai attacks with 9/11. Being impressed by the marquee setup by the Hindu AMericans for election campaign of Trump, Trump also supported Modi's stance and declared to fight together against Islamic Terrorism. However, on the 2nd day while answering a question raised by a journalist over Modi's commitment against Pakistan regarding terrorism, Trump covered the whole issue by saying that Modi was pointing towards Iran. However, he accepted that during his speech he used aggressive tone against Pakistan. 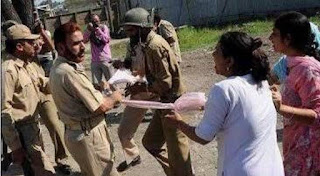 On 27th September 2019, the appreciation of Imran Khan's speech and clapping during the speech started tornedo of criticism. Indian analysts are of the view that their Prime Minister is being seen as the liar. In the international media Imran Khan was portrayed as hero while Modi as Hitler and facist leader. first time in the history of the United Nations Modi's propaganda in USA was destroyed by mentioning the increasing Hindu Extremism and Terrorism under the umbrella of RSS in the United Nations General Assembly, it was told that Hindu terrorism is a big threat for the Indian minorities espcially Muslim and Christians of India. In the views of an Indian journalist Imran Khan's speech in UNO, has made the decision of lifting curfew or not in IHK a big challenge for Modi. If Modi ends curfew, it will be seen as a big achievement of Imran Khan all over the world. If the curfew continues the protest over the international will continue to increase. While Modi was appreciating himself in Hindi in United Nations' General Assembly, Modi also demanded lifting of curfew in IHK while crediting Modi as his friend. In contrast to this, in his speech when Imran Khan mentioned Indian Air Force's attack over Pakistan destroying 10 trees and damaging campaign of Pakistan against the environmental challenges and the statement issued by Indian Air Force of killing 350 Muslim terrorists, whole assembly started laughing. Modi was not present to hear the clapping however, this appreciation had reached the streets of India and Indian public was forced to think over it that how much their extremist Hindu leader has damaged the credibility of India by imposing curfew and denying basic rights to Kashmiris which may result in the nuclear war leaving nothing behind...