Pakistan’s Will for Peace should not be considered as Weakness!


After 9/11, in order to calm down the American people, the USA got support from UNO to attack Afghanistan. British and other Western Countries along with NATO were the allies of the USA in this attack. Everyone was aware of the fate of Afghanistan in the hands of such a big army. In such a situation, India was the only country who tried to convince the USA to attack Pakistan in spite of Afghanistan. India paid to her lobbyists in American Congress, pressurized USA from Israel, contacted NATO countries in this regard, Western and American newspapers and journals were paid to write against Pakistan. All these efforts of India were pivoting around the single point that Pakistan is the only terrorist state in the world. Pakistan trains terrorists that are afterward launched into neighboring countries and even other continents. Through such propaganda, the USA and international community was incited to target Pakistan in spite of Afghanistan in order to end terrorism in the world. When all such efforts of India did not bear fruit, Indian Foreign Secretary Chokila Lyer was sent to the special mission by Indian Prime Minister Vajpayee to convince Americans to attack Pakistan. L.K. Adwani offered Indian cantonments and airbases and Indian army, air-force, and Navy  to the USA if USA attacks Pakistan. Americans did not give any positive response to the Indians. With the aerial attacks on 07 October 2001, the war in Afghanistan started, however, India continued her propaganda against Pakistan. After defeat on all fronts, Indian govt. staged an attack on Indian Parliament on 13 December 2001. India blamed Pakistan for this staged terrorist attack and Indian Prime Minister ordered the Indian army to move forward to attack Pakistan. This was serious situation; on the western side of Pakistan America along with her allies was attacking Afghanistan while on the Eastern side whole of the Indian army was deployed to attack Pakistan. Pakistan’s brave army was present on the border in order to thwart any misadventure by Indians. Indian was the first to start the attack; the Pakistan army was only present to give a befitting reply and put an end to Indian war. In such a situation when the enemy was at the heads of Pakistanis but Pakistani people did not give a shit to it. They were not afraid of war but they had trust and believe in the professionalism of Pakistani army and its command. India wanted to blame ISI for attacking Indian parliament through Lashkar-e-Taiba in order to prove Pakistan as a terrorist state.
DG ISPR Major General Rashid Qureshi has made this clear to the whole world in his press conference that Mumbai attacks were staged by Indian Secret agencies. Indian plans were to declare freedom fight of Kashmiris in Indian Held Kashmir (IHK) as terrorism and defame Pakistan as well. DG ISPR made this clear to the whole world that if India attempted to cross the international border she will have to pay heavy costs.

International media was concerned that the Indian attack on Pakistan may result in failure of International war against terrorism. Pakistan and India both are nuclear states and war between these two countries would ultimately result in nuclear war. Indian posed as she wanted to target so-called terrorist camps across the LoC in Azad Kashmir; the deployment of the Indian army on the border in Punjab was to thwart any reaction from the Pakistani side. In this regard in January 2002, a special meeting of Indian Cabinet was held in which it was decided that “Tiger Squadron” of Indian Air Force will target terrorist camps in Azad Kashmir; afterward, the Indian army will enter into Azad Kashmir and return back after a limited military action. Indian  media posed that as USA had right to invade Afghanistan for Osama Bin Laden, similarly New Delhi has right to invade Pakistan and take military action against hideouts of LeT. 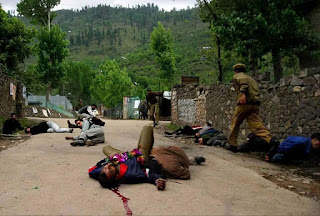 After Indian claims, Americans newspapers reported that Pakistan has deployed ballistic missiles near the Indian border. In order to support these claims, pictures taken from satellites were published as well which showed the presence of Pakistani missiles near the Indian border. Indian govt. was constantly changing stances; Hindu extremists were criticizing govt. for not issuing orders to Indian army to attack Pakistan and delaying in teaching a lesson to Paksitan. Indian media was also fueling the situation that this is the chance to crush Paksitan forever as international powers are already active in Afghanistan. However, few Indian Defense analysts were criticizing Indian Command that they wasted 23 days while moving the Indian army to the border meanwhile Pakistan shifted its troops to the border as well. Pakistani army was waiting for the 1st fire from the Indian side and Indian Command was well aware that in case of war, India will have to bear great losses.
On 14th May 2002, Indian media claimed that 3 terrorists of LeT attacked military barracks of Indian army in the Kaluchak area of IHK in which more than 40 persons were killed including women and children of Indian soldiers. Indian media was claiming this as the second biggest attack by Pakistan after Parliament attack. Indians started protesting and demanded Indian govt to attack Pakistan. In order to calm down the rage of the Indian public, Indian Prime Minister called the meeting of Indian cabinet claiming that we will have to put an end to the situation. American Foreign Minister Richard Armitage gave the statement that attack on the Kaluchak barracks was conducted by such elements who want a war between Pakistan and India and Pakistan is not involved in this attack. In this way Indian conspiracy to enrage the international community against Pakistan in which India killed families of her own soldiers failed badly.

On 13 July 2013, during the hearing of the murder of Ishrat Jahan (a Muslim student) at Ahmedabad in a fake encounter by police, Secretary of Indian Interior Ministry R.V. Mani gave the affidavit that whether it was 2001 Parliament attack or Mumbai attack in 2008, these were conducted by secret agencies of India. Ishrat Jahan was killed by Indian Police in Ahmadabad in 2004 allegedly for being the Muslim suicide bomber sent by Pakistan by the police officers Senior Superintendent of Police and above ranks. The bad planning of Indian police and state terrorists; that two students killed along with Ishrat Jahan claimed as activists of LeT and accomplices of Ishrat Jahan were identified as Sikh and Hindu. On the protest of their families, the investigation revealed that encounter and the allegations were fake. The affidavit of R.V.S. Mani proved to be the last nail in the coffin of the fake story. In his affidavit he further wrote that the goal behind the fake encounter was to support changes in the Prevention of Terrorism Act (POTA), which gave arbitrary powers to Police and the Indian army in IHK to take action against persons termed as suspicious. After these terrorist activities, the Unlawful Activities Prevention Act (UAPA) was introduced.

The purpose of quoting above mentioned incidents was to disclose the enmity of Indians and Hindus against Muslims, Kashmiris, and Pakistan. A country that can stage bomb blasts and kill its own citizens, kill its own soldiers in Pulwama the attack in order to pave the way to attack Pakistan; no good can be expected from such a country.
The inhuman activities of Indian state terrorists in IHK has been now changed into genocide of Kashmiris. India is facing criticism from the whole world and human rights organizations. International powers are concerned that Indian acts may result in the nuclear war, their investments and interests in India would be burned to ashes. In such a situation they will try everything to bring both countries to the talks, however, if Pakistan starts negotiations with Indian without getting the demands fulfilled this would be treason with Kashmiris and suicide for Pakistan. Pakistan should keep unveiling the ugly face of Hindu terrorism. India has been exploiting Pakistan's struggle for peace as Pakistan’s weakness; this should  be out to an end NOW!