BBC Worried over the Defeat of Terrorists! 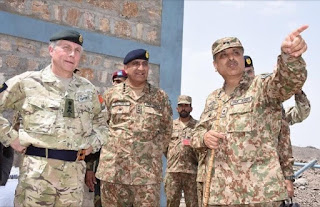 BBC may remember the visit of Chief of General Staff, Nicholas Patrick Carter on 13 October 2017. During his visit, he expressed happiness over the destruction of the TTP centers, secret hideouts, and suicide bomb manufacturing units. He said, “United Kingdom greatly appreciated Pakistan's sacrifices in this regard”. General Nicholas termed the actions of Pakistan army a step towards the restoration  of peace in the region and assured British support to Pakistan. On the wish of General Nicholas, he was allowed to visit tribal areas. Afterward, on 06 April 2018, British Army Chief visited Pakistan. During his visit, he visited Balochistan especially Pak-Afghan border. More important for this was the visit of British Army Chief on 16 October 2016 he spent most of his time in tribal areas and said, “It is a great privilege for me as a head of the British Army to come to Miran Shah, the Administrative Headquarter of the North Waziristan. I’ve heard so much about What Pakistan army has been going in this part of the world”. 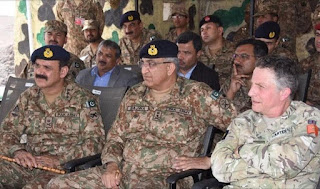 General Nicholas’s interest in victories of Pakistan army against terrorists in North Waziristan and other tribal areas was not without reason. he has served in Afghanistan in 2001 as a part of the American allied forces. British forces were responsible for the areas near the Pakistani border. He was well aware that fighting against the terrorists hiding in the narrow mountains was equivalent to fighting against the mountains. General Nicholas expressed his feelings in his visit to Miran Shah. The second reason for his interest was the defeats of the British Indian army in 1849 in these tribal areas. In one skirmish all British soldiers except Doctor and local Indian soldiers all were killed by the tribal fighters. English doctor was left alive so that he may convey the reports that all British soldiers were killed. Such a defeat British army was experienced in Mohmand, Khyber Agency and North Waziristan. General Nicholas was also aware that in spite of attacking tribals on the order of Governor General Lord Dalhousie why Sir Charles Napier and Sir Colin Campbell preferred to resign. British Army Chief was well aware that which forces were funding TTP for their establishing strongholds in Afghanistan. Which international agencies were providing weapons, training and planning to the terrorists. He was well aware of the capability of the weapons that were given to the terrorists. Despite all this, the victory of the Pakistan army against the terrorists was a historical achievement. For this victory, Pakistan army has sacrificed thousands of soldiers and officers. These martyrdoms of Pakistani soldiers were the base of the Pakistan army’s victory against terrorists funded and supported by the international powers.

BBC tried to defame Pakistan army and their own General Nicholas by publishing the fabricated report, “Uncovering Pakistan’s Secret Human Rights Abuses”. The 3 visits of this General from October 2016 to April 2018 has been reported by BBC itself. These reports carried the appreciation of Pakistan army. If the BBC has got news of Human Rights abuses by Pakistan army, then this was the duty of the BBC to disclose these reports during the visits of their General and appreciation of Pakistan army. BBC could not report cutting throats of those who opposed TTP, hanging dead bodies in crossovers, kidnapping young girls from their homes and murdering those who resisted. BBC should have included the demands of DO MORE since the American invasion in Afghanistan. BBC should have translated that DO MORE meant hitting terrorists with flowers so that neither any house was destroyed nor anyone got hurt. Such flowers should have been provided by BBC that whose smell converted all terrorists into human loving. 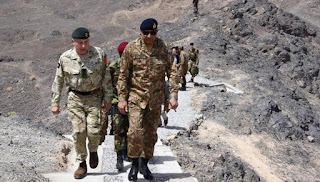 The crime of the Pakistan army is that in spite of destroying tribal areas just like Americans and their allied wanted, Pakistan army chose difficult and hard to understand strategy. Before the start of the operation, civilians were shifted to safe places and afterward the military operation was started. This was against the plans of America and its allies, especially who had imposed these terrorists on Pakistan. The goal behind the propaganda and pressure on the Pakistan army to start operation was that when the Pakistan army will start an attack against the terrorists hiding in the civilians, locals would be forced to take weapons against Pakistan army. In this way, in the allegations of attacking Pakistan army, they could have easily pressurized Pakistan army to protect interests of American allies especially if Pakistan army to save itself from being trialed under the allegations of human rights abuses. This also included giving up support of Kashmiris living under illegal occupation of Indian army. The American demand to start action against the Haqqani network in tribal areas was just to befool the world. America was well aware that the Afghan Taliban attacked Americans from strongholds within Afghanistan.
BBC’s report might had some credibility if it had not posed Manzoor Pashteen as an oppressed leader. This report was purposely published after 26 May 2019, on the day when Mohsin Dawar and Ali Wazir attacked a military check-post with few miscreants. Five soldiers serving on the check post got injured 1 of them got martyrdom. In the reciprocal firing 3 persons were killed while 15 were injured. It was necessary to wash up the negative image of PTM, which was done by the BBC by fabricating the story of human rights abuses by Pakistan army…