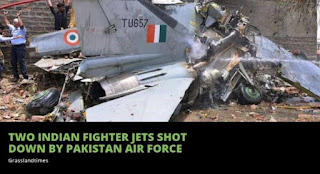 India expert in fabricating stories and telling lies had to lick the dust when Indian Air Force crossed Line of Control (LoC) and entered up to 5 Kms within Azad Kashmir. Within no time Pakistani fighter Pilots were on the heads of the Indian Air Force. Indian Pilots choose to run away and in order to reach within the air space of Indian Held Kashmir (IHK), they dropped their extra fuel and bombs (payload) to increase the speed of the fighter jets. This was reported by the Indian media that 12 Mirage 2000 bombers of Indian Air Force targeted hideouts of Jaish-e-Muhammad in the Azad Kashmir killing at least 350 terrorists. Uncountable channels of Indian media had been fueling war mania in the public with the help of Indian govt. for taking revenge of Pulwama attack from Pakistan. Indian extremists had been suffering from war mania and became hysterical. They started reporting the fairy tales of Indian Air Force's attack on Azad Kashmir exactly on the basis of the Bollywood movies. Such news created tensions in Pakistan as well. Questions were raised over the professional capabilities of the Pakistan army and Air Force. India forgot that in today's modern era of scientific development it is impossible to hide truth through propaganda for long. As soon as the sun rose, the public of Balakot hasted towards the area where the sounds of bomb blasts were heard. Within no time the pictures of the alleged targeted area got viral on the social media. The craters created on the ground and the fallen trees were the results of payload dropped by Indian airplanes. 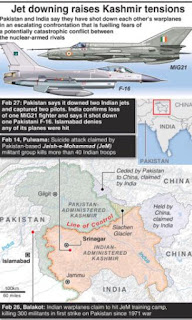 Indian govt. has claimed that its warplanes remained in Pakistan for 21 minutes in the air of Azad Kashmir. This was declared as a surprise for Pakistan. Director General of ISPR Pakistan cleared the situation to the media through Press Conference and told India to be ready for Pakistani Surprise in which we will choose the target and time. Pakistani govt. had already rejected Indian claims and demanded that India should avoid escalating the tensions and work for peace in the area. After Pulwama Attack, Pakistan was ready for any mischievous act and misadventure of India. Although Pakistan has been reacting patiently and asking India to provide evidence for the involvement of any group or Individual in Pulwama attack. Prime Minister Imran Khan promised that everyone who is proved to be involved in these attacks would be brought before the law.
However, India has been continuously threatening Pakistan. Then Pakistan did which was not even imagined India in her wildest nightmares. Indian media which does not spare a second to defame Pakistan remained silent over the surprise from Pakistan. Pakistan Air Force locked important buildings of Indian in IHK and than shot missiles few feet away in the open area giving a clear message to India that Pakistan might have destroyed Indian Military installations and High-Value Targets easily. As Pakistan is not in favor of the war that is why missiles were fired in the open areas. Perhaps Indians and Indian Armed Forces were not aware of Pakistan's technology to engage targets in such a way. 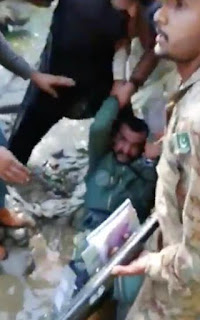 As a reaction to Pakistan's attack, 2 Indian Air Force fighter jets entered into the air space of Azad Kashmir. Pakistan Air Force destroyed both Indian fighter jets within the air. One Mig-21 fell within the area of Azad Kashmir while others fell in the area of IHK. The Indian pilot who succeeded in safely ejecting the falling Mig-21 fell in the hands of the angry Kashmiri mob. The rest of the story has been told by Indian Wing Commander Abhi Nandan in his video message that how 2 soldiers saved him from angry mob and Captain of Pakistan army took him to the regiment where he was given first aid. He praised the professional capability of the Pakistan army, courtesy and declared Pakistan army as the messenger of peace. 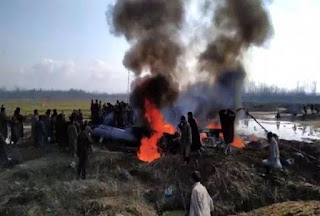 The arrest of an Indian pilot in Pakistan was the biggest blow for India. Indian media was busy in propaganda against Pakistan. Narendra Modi has been threatening Pakistan while Pakistan was insisting for peace. Pakistani Media was busy in proving that peace is the need of the region, not war. Pakistani Prime Minister has been making it clear to India that war is not the solution to the problems and if once started, war will be unstoppable. The whole region would be destroyed in the war between two nuclear powers. In contrast to this Indian Army and Prime Minister were busy in escalating the situation. Another surprise was the declaration to release Indian Wing Commander Abhi Nandan. This was a serious blow to India on a diplomatic battlefield as well. Imran Khan made this clear that if India started a war that Pakistan will teach her that how wars are fought.
In the way Pakistan has damaged Indian Army over LoC and Aerospace of IHK, India has realized much more. The decision to release Abhi Nandan increased the worth of Imran Khan even within India as well while the ranking of Modi fell to zero. The role of Pakistan as a peaceful country was in front of everyone. Pakistani media also showed the tradition of balanced reporting in contrast to Indian media's propaganda. This proved that 17 years long war against terrorism has converted the Pakistan Army into a professional army. 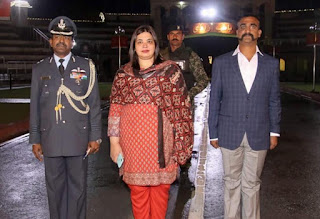 Pakistan gave the message of peace to India but made this clear to India that every aggressive act of India will have a befitting reply. This was the patience of Pakistan which made this clear that in contrast to Indian media's propaganda and war mania Pakistan's stance for peace was correct. That is why serious groups in India rejected allegations of Indian govt. and the media. 21 Political parties of India established an alliance against Modi and issued the declaration that policies of Modi are threatening the integrity of India, destroyed capability and worth of Indian army for its political purposes. The voices are being raised even from within India that massacre of Kashmiris in IHK should be stopped and positive response should be given to Pakistan's message for peace…