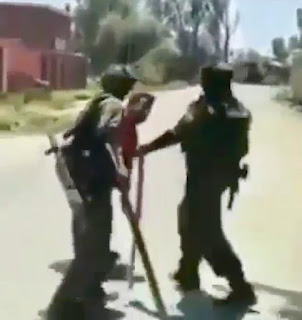 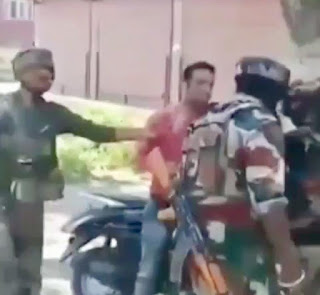 This is the clip made by the Indian soldiers, which he shared with his friends and family to show off his bravery against unarmed and powerless Kashmiris. What happened to the youngster whether he was taken into custody or killed him in a fake encounter?
Astonishingly, the number one army after Chinese army out of the 29 world military powers equipped with the latest weapons feels proud in torturing the unarmed people to chant slogans against the neighboring country, claims firing over stone pelting children as professionalism insulting the profession of army and SOLDIER. The gang rapes of Kashmiri women are adopted as a war strategy, not only this they tie up the Kashmiri youngsters on their jeeps as human shields to save themselves from the stones thrown by the protesting Kashmiris and are praised by their commanders with medals. 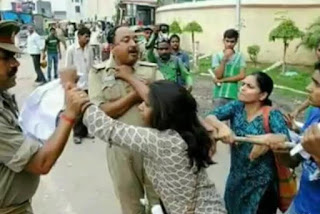 American and NATO forces used all types of lethal and destructive weapons against Afghan resisting forces after attack over Afghanistan in 2001. They used daisy cutter bombs, missiles. However, neither they used the Afghans as human shields nor gang raped Afghani women as a war strategy to discourage the resisting Afghans. After using all the strategies of war, at least americans understood that they cannot defeat the Afghan Taliban fighting for their identity and freedom. As long as they realized this they decided to withdraw from Afghanistan's decided this in 17 bloody years. But Indian rulers and Army Commanders are unable to understand in the 71 years that Kashmiris are not ready to live with India and accept the capture of Kashmir by Indian soldiers. They want to expel Indian soldiers at all costs. 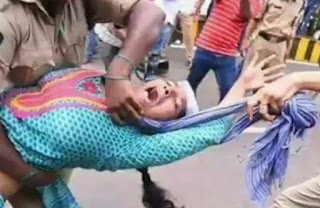 Afghan Taliban are fighting armed with weapons against the foreign forces, just like the Indian Held Kashmir, Americans also established a puppet government in Kabul which needed American umbrella despite supervision of Americans. Indian failed in the drama of puppet govt. and enforced Presidential system but still, India claims to be Champion of Democracy and Secularism.
Indian rulers signed the written deal of giving right of self determination to the Kashmiris in 1948 in the UNO. since than they are denying this promise. In the last 7 decades, they have converted Indian Held Kashmir practically into military cantonments. In these 71 years, Indians have committed all such atrocities against Kashmiris which have ashamed the whole humanity. However, Indian soldiers claim Kashmir being the ATOOT ANG of india and massacring Kashmiris for their nefarious designs. According to the facts and figures, there is one indian soldier for every 12 Kashmiris in Indian Held Kashmir. Such strength is not even deployed in the prisons over prisoners. 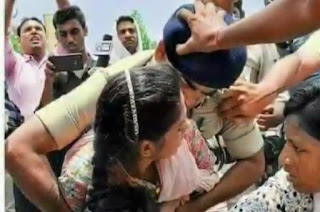 Due to the interests of World Powers linked with the markets of India, they are not ready to spell a single world over the violations of human rights by Indians. Even the country like the USA, issues the reports of the violations of human rights by Indians when sales of American weapons drops. Apparently, India rejects these reports. However, after the passage of sometime, we get the news of billion dollar deals between Indian rulers and American Weapon Manufacturers.
In order to prolong her hold over the Indian Held Kashmir, Indian rulers have purchased latest fighter jets, ships, submarines, Tanks, anti-tank and anti aircraft missile systems converting India practically into a godown of weapons. However, neither Indians are ready to give right of self determination to Kashmiris nor basic facilities to its public. India is the only country, whose people are forced to buy rats sold in the markets. Indian Army Chief supports indiscriminate firing over stone pelting children because his soldiers may lose their life due to being hit by the stones. 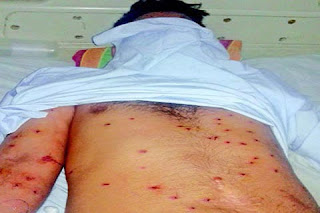 Torture, violence, inhuman acts have been made the part of the Indian army. Indian army has made life hardest in the IHK. Every year, Pakistan celebrates 5 February as the Day of Solidarity with Kashmiris. This has now spread all over the world. In all the countries wherever Pakistanis live, rallies are held on 5 February in favor of Kashmiris. From last few years, locals and non-Pakistanis have also started participation in these rallies that India should give the right of self determination to Kashmiris or declare India as the enemy of democracy and humanity. 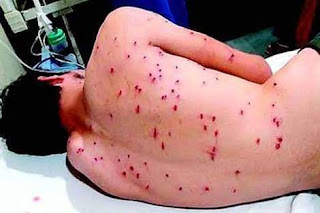 Every day Indian forces kill innocent Kashmiris, takes them into custody without registering any case. Even Indian journalists have started raising voice against the Indian army and Police of the puppet state of IHK. Indian Generals and politicians should realize that on the gun point they may force Kashmiris to chant slogans against Pakistan but not a single Kashmiri wants to live under the control of Indians.