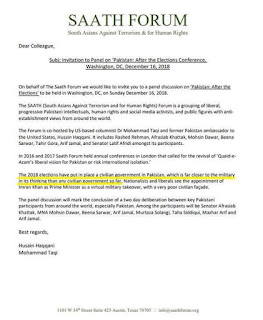 The letter written by the American President Trump 03 December 2018, requesting for help in the restoration of Peace in Afghanistan has astonished American and Western Media, International Defense analysts and Pakistanis as well. Trump who has been threatening Pakistan since he came into power and did not give any statement except threats to Pakistan. His request to Pakistan for the restoration of Peace in Afghanistan reinforces Pakistan's stance that peace in Afghanistan is not possible through war but by negotiations with the Taliban.
However, Hussein Haqqani is the only person who responded to the tweet of CNN about Trump's letter to Pakistan in these words, "I wrote and lobbied against Pakistan extensively for 7 years and for what? For this? I have been betrayed".
Hussein Haqqani should have asked this question from himself that who was sent by Asif Ali Zardari on some unseen pressure and there he in spite of representing Pakistan used his position to attack the integrity of Pakistan. He became the agent of the anti-Pakistan agencies. All the atrocities committed by Indian soldiers in Indian Held Kashmir, he started alleging Pakistan army for all such inhuman acts after he was removed from his designation. He issued unchecked visas to thousands of Black Water and CIA operatives; the greatest example would be the Raymond Davis. 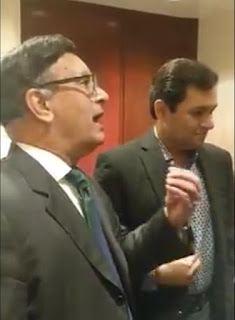 While working as an Ambassador in the USA, he established links with Israeli and Indian Intelligence agencies to secure benefits for him in the USA. His claim is still on the record that through his cooperation, America staged the Abbottabad Operation against Osama Bin Laden. He supported all the conspiracies against the Nuclear power of Pakistan. Two Nations Theory has been his favorite target. He wrote many books to prove Pakistan army as a threat to the International peace, however, his book "Reimagining Pakistan: Transforming a Dysfunctional Nuclear State" he left no stone unturned inciting international powers to take over the Pakistani nuclear weapons. His books were welcomed in Pakistan but more preferably in India. 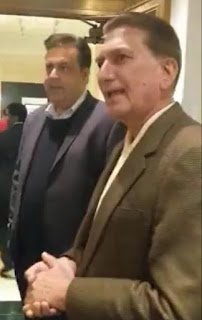 He has the talent to prove lies as true in his speeches but he utilized his talent to uproot his own motherland. He claimed that he has worked hard for the harsh stance of the USA against Pakistan but he is not satisfied yet, he wanted practical steps (attack) against Pakistan.
After Trump came into power, Hussein Haqqani wrote an article according to the mentality of Trump, "To win Afghanistan, Get Tough on Pakistan" which was published on 06 July 2017 in NewYork Times. This article is the copy of the stance of ex-Chief of RAW B. Ramin in which he advises America to rethink the policy and relations with Pakistan. He termed concerns over possible Indian aggression as an imaginative fear of Pakistan army. 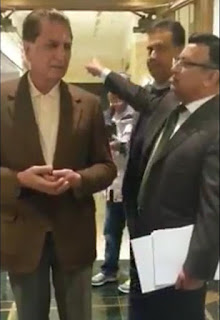 Hussein Haqqani also negates the Pakistani concerns over the presence of more than a dozen Indian consulate in Afghan provinces adjacent to the Pakistani border. He is also thankful to the economic cooperation of India to Afghanistan and also praises Indian role in Afghanistan. Hussein Haqqani is worried that US establishment has stopped giving statements to continue Indian role in Afghanistan at all costs. Perhaps one of the reasons is that American representative Zalmay Khalil Zad who is considered as anti-Pakistan is now continuously in contact with Pakistan and praising Pakistan after negotiations between Taliban and Americans in UAE. In such a situation Hussein Haqqani's SAATH (South Asian Against Terrorism and Human Rights) forum has been rendered inactive and not receiving any significant funds from the USA. The basic reason behind decline of acceptance of this forum is the hosting of its seminars in London by Altaf Hussein, founder of MQM for separation of Balochistan, exploiting few Baloch Feudal Lords against Pakistan living in London lavish life, two American members of Congress notorious for LoLobbyingor India were also present in this gathering and have also presented resolution for separation of Balochistan from Pakistan in US Congress. 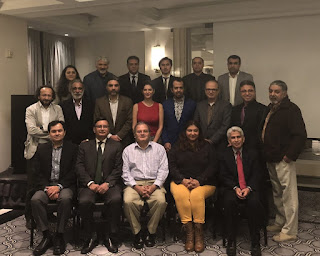 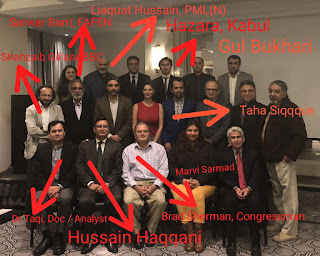 Hussein Haqqani's SAATH provides support to anti-Pakistan liberals who are working against Paksitan army so that they may defame pakistan army through his forum for mislead the Western community and incite international powers to take steps against Pakistan. Although, SAATH forum mutilates Quaid's speeches that Pakistan should have a secular and liberal system free from the interference of military, however, no one from the outside is given access to the speeches and suggestions of this forum.
On 16 December 2018, Hussein Haqqani arranged a gathering in Washington DC on the forum of SAATH in which special anti-Pakistan people were invited from Pakistan. The subject of the gathering was, "After Elections 2018; Military is Ruling Pakistan through Proxy Civil Govt." that is why this govt is the new form of Martial Law. Pakistanis from Pakistan or living in America might have never come to know about this seminar if two Pakistanis had not attempted to attend it without the invitation. As soon as these two Pakistani members entered into the Hall a strange restlessness spread in the hall. Hussein Haqqani and his hosts explained to these Pakistanis that no one can attend the seminar who has not been invited; they replied that they are Pakistani and want to hear the comments about Pakistan so they should be included in the invited guests. Hussein Haqqani had no excuses left. He said that he cannot invite them on his own the decision of invitations is done by the committee of the SAATH. When the situation grew harsher, Hussein Haqqani called the security of the hotel. When the Security Incharge reached there to understand the situation, the uninvited guests unveiled the faces of Hussein Haqqani and others in very sociable manners and told the Security Incharge that as this seminar is about Pakistan, we are Pakistanis but we are being stopped from attending the seminar because in this seminar conspiracies against Pakistan are being hatched. 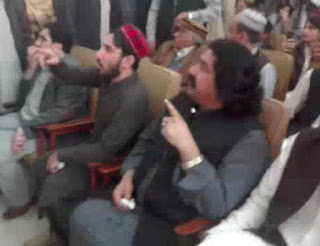 They declared Hussein Haqqani as the traitor of Pakistan and asked that when he will visit Pakistan as he is being called in Pakistan. Some supporters of Hussein Haqqani tried to scuffle with univited guests but they were told in plain words that they are in the USA not in Pakistan where they may beat them. When this discussion was going on, someone from the guests recorded the whoel activitiy in his mobile and shared on social media afterwards.
Afterwards, it was disclosed that Hussein Haqqani has also invited Mohsin Dawar of Pashtun Tahafuz Movement PTM in his seminar, but as his name has been placed in Exit Control List (ECL) so he could not attend the seminar and propaganda against Pakistan army.

However, Mohsin Dawar along with  Ali Wazeer and Manzoor Pashteen held a seminar at a hall adjacent to Peshawar Musuem in the commemoration of the APS attack on 16 December 2014. The relatives of the martyred children got the first shock when they saw the large picture of ex-Representative of TTP Ehsan Ullah Ehsan on the wall. Few parents left the hall, realizing that Mohsin Dawar wants to exploit martyrdom of their children for his nefarous designs against Pakistan. When the first orator came to the dice to start his speech, few persons from the hall started chanting anti-Pakistan slogans, at this the parents of the martyred children left the hall. On such a situation the PTM members started singing the chorus "Behind Terrorism is the Uniform (Army), (Yeh jo Dehshat Grdi hi Iske Peeche Wardi Hi". This was unacceptable for the parents of the martyred children, they started quarelling with the PTM members including children and women. In this way, this anti-Pakistan seminar was flopped but PTM memebrs proved that they are not going to stop here and will follow the footprints of Hussein Haqqani to defame Pakistan…