Silence over the Massacre of the Kashmiris is Equivalent to Support!

As soon as the Rajdhani Express Train arrived the reached Indian Occupied Kashmir’s (IOC) station Pathankot, Indian army surrounded the Pathankot Railway Station. The train was 15 km away from the station, passengers and the crew of the train were worried that what was going to happen as there may be the report of the bomb over the tracks or a big terrorist attack. As soon as the train stopped over the platform, no one was allowed to offload from the train. The passengers over the platform were also ordered to stay away from the train. Indian soldiers entered into a bogie and came out with 6 youngsters whose faces were covered with the cloth. The whole station was frightened. When Indian soldiers came out of the station with the arrested youngsters, vehicles of the state police were also present outside. The reports of the presence of Indian army on the railway station reached the media and media representatives reached there as well; they were ordered to stay out of the station. The arrested youngsters were taken into a Police van. 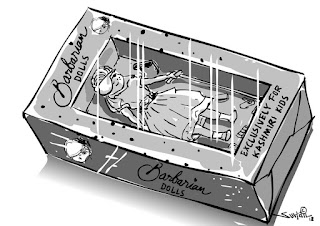 Media representatives were told that they are wanted by the State Police for attacks over the Indian army who were students of Delhi University. When the media representatives asked about the details of the cases registered against these youngsters and their identity, Indian army replied that they do not know. Media representatives questioned that they should have been arrested from where they boarded the train or New Delhi. Indian army has no answer to these questions. On the 2nd the newspapers reported that 6 Kashmiri youngsters have been arrested.
IOC that is already facing the war and worst state terrorism, no one knows about the identity of the arrested youngsters. Who are they? Thousands of Kashmiri students are studying in the educational institutions of New Delhi who often come to visit their families living in the Indian Held Kashmir (IHK). Due to the closure of Internet and Mobile Phone Service, it is not possible for parents to know about their children studying in different universities of India. Indian govt. is not concerned about the pain that the parents of those arrested are going through. No one knows that whether they will be able to reach homes again or the torture cells of the Indian army and mass graves will be their final destination.
From 22 November, within two weeks martyrdoms of 34 Kashmiris have been reported. Majority of them youngsters, who are killed by Indian army’s direct firing over the peaceful protests that were taken out to protest against the killings of the innocent Kashmiri youngsters. This massacre of unarmed Kashmiris falls under the category of war crimes against civilians but the irony of fate is that no one is ready to come ahead and raise voice against it due to which IHK has been converted to a practical hell.

United Nations issued a report on the war crimes of India in IHK in 2018, demanded India end the Black Laws in the name of laws against terrorism and announced to send an inquiry commission, however, now UNO is also silent once again. The UNO’s Rights Commission has not considered that day by day the war crimes of the Indian army increasing. Mutilating women in the name of the search of homes, arrest or murder of males for resistance against the crimes of the Indian soldier. If they do not protest than what else they should do. By using tear gas, firing live bullets, chemical weapons and pellet guns indifferently that target our children, elders, women or youngsters Indian soldiers think that Kashmiris will not protest. But protest has become the part of Kashmiris lives.
A few days ago a tear gas shell fired by the Indian army hit a ten-year-old child in the area of Budgam, he fainted on the spot. Doctors at the hospital gave him the first aid to save his life and advised his parents to take him to the Sri Nagar hospital where he is still fighting against the death. Similarly, in the District Shopian, pellets fired by the shotgun of Indian army took the right eye of 18 months old infant baby girl. On this, a cartoon titled Barbarian Dolls was published by the International media. In the cartoon, a doll has been shown packed in a box holding a white stick and on the pack, it is written, “especially for Kashmiri Children”. In a similar incident in the area of District Kulgam, a bullet fired by the coward Indian soldiers took the life of the 14 years underage Muskan during the treatment. No one can understand the pain and grief of her parents. Her father decided to bury her in the Pakistani flag. When she was taken to the hospital, she was alive despite the bullet in her head. The X-ray shows that bullet has been entrapped in the back of her skull. The bullet was taken out through the operation but doctors failed to bring her back. In this way for remaining unconscious for three days, she succumbed to the injuries.

A new story of state terrorism and barbarism is being written by Indian soldiers in the Indian Held Kashmir. These crimes and tortures are enough to give shivers to the reader. We Pakistani by just lending moral support or giving the lip service we think that we have done a great thing. There are some liberals who think that by protesting against the war crimes of India in IHK we are becoming a hurdle in the peace process between India and Pakistan. They are unable to realize that Kashmiris are embracing martyrdom showing their love for Pakistan, chanting slogans in the favor of freedom. They hoist the Pakistani flag even in the firing of live bullets. Why are they being killed?
Had Muskan any enmity against India or Idnain army? This is a clear cut massacre, which should be protested at all levels. Our private and state TV channels should not remain limited to the news reports only but also telecast detailed programs and talk shows so that every Pakistani may realize that Kashmiris are laying their lives fro Pakistan.
We will only realize that Kashmiris are fighting for Paksitan when only 50% dams being constructed over Paksitani rivers by India will be completed; by remaining silent over the massacre of Kashmiris in the hands of Indian terrorist army we have not only supported the massacre but also devastated our coming generations.