From the Martyrdom of Burhan Wani to Dr Manan Basheer Wani!

Not a single day passes in Indian Occupied Kashmir, the news of the martyrdom of 2-4 Kashmiris and uncountable numbers of injured is reported. Harassing the students of School and College in the name of the body search, if any girl resists over the manhandling by Indian soldiers she is tortured. Looting the homes in the name of search, raping women during search operations, arresting the men without any FIR on the basis of mere doubt and afterward disappearing them, all such incidents are routine in Indian Held Kashmir.
On 11 October 2018, during the search operation in Hindwara area of District Kupwara, Dr. Manan Basheer Wani, Doctorate Degree Holder from Ali Garh University of India was martyred by the Indian army. His friend Ashiq Hussein was also martyred along with him. On the martyrdom of Dr. Wani, Hurriyat Leaders Syed Ali Gillani, Mir Waiz Umar Farooq, Yaseen Malik, and others gave the call for the strike, as a result, whole Indian Held Kashmir presented the scene of Curfew. Markets, Educational institutions and private offices were closed. Due to the strike of public transport the attendance in govt. offices were nominal. Due to the successful strike, the martyrdom of Dr. Manan was highlighted in the International and Indian media. Dr. Manan was allegedly killed in the result of Indian forces firing during the search operation. In other words, a Ph.D. Degree Holder Dr. who was known as the most honest, hardworking and well mannered, was martyred by Indian soldiers as a terrorist. The protest in the Ali Garh University was natural. Ali Garh University students wanted to offer funeral prayers of Dr. Manan Wani, Indian Interior Ministry ordered to stop the funeral, on such an order, Hindu students also joined hands with Muslim students to protest against the govt. Students of Central University Jamia Millia Islami of Delhi and Hyderabad University took out the protest rally to express solidarity with the students of Ali Garh University Students.

On the pressure of BJP Govt. Ali Garh University, registered the case of treason against 3 students while 9 others were given notices, spreading violence in the whole university. 1200 Kashmiri students studying in the university announced to leave university as a protest, all the students of Ali Garh University joined hands with them and threatened to leave university. On the other hand, the large number of people participating in the funeral of Dr. Manan Wani on 12 October 2018, was enough to give shivers to Indian security agencies. Indian army that was always seen busy in looting the Kashmiris on the check-posts, disappeared. The funeral of Dr. Manan was accompanied by thousands of people. The slogans in the favor Kashmir’s accession to Pakistan and Long Live Pakistan were chanted. They were bearing the Pakistani flags. In such a protest, the sight of Indian state agencies would have made people more violent.

If the Indian army had baton-charged, the result would have been bloodshed on large scale, the situation would have turned out of control for Indian army. Moreover, the protest of Ali Garh University students was also very violent. The number of Kashmiri students is more than 1200. When the students announced to offer funeral prayer of Dr. Manan Wani, BJP member of Parliament ordered University administration to stop the funeral prayers at all costs and ordered Police to take action against Kashmiri students announcing the funeral prayers; Indian police registered case of treason against three students and started raids to arrest them. University administration issued notices to 9 students. On such a situation students of Ali Garh Universtiy threatened to leave the university. In the meanwhile, within the ten days, Indian state terrorists had martyred 23 Kashmiris. One of the martyred women was pregnant killed in the firing of the Indian army. As a result of Indian army fire, including 8 women, 16 people were injured. 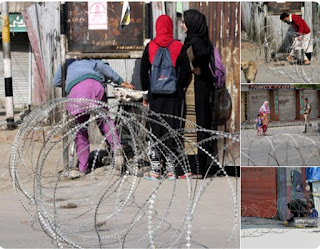 On the 21st October 2018, Indian army blasted up a house through bombardment which shows the impatience of Indian army. Indian army has got tired of state terrorism. The continuous protests in Indian Held Kashmir is a nightmare for Indian army. In the past, Indian army and administration used to blame Hafiz Saeed, Lashkar-e-Taiba and Jamat u Dawa for infiltration and sending terrorists. In this regard, the international propaganda against Pakistan was also a good tool in the hands of New Delhi.

However, the martyrdom of Burhan Wani, 21 years old Kashmiri youngster by the Indian army negated the propaganda of India that Pakistan and ISI are behind the Freedom movement of Kashmiris.  World first time realized that Indian atrocities in Indian Held Kashmir and war crimes against Kashmiris especially Kashmiri women have forced youngsters to take up weapons. Every youngster of Kashmir is ready to give up his life for freedom. Burhan Wani’s magnificent Educational record and taking up weapons against atrocities of Indian army; made him a hero for Kashmiri youngsters. A hero which is termed as a god in the Indian legends. Every youngster of Kashmir wants to give up his life for freedom just like Burhan Wani; if scholars like Dr. Manan Bashir Wani has been forced to take up weapons against Indian forces, India should realize that it is impossible to continue their illegal occupation of IHK for long…