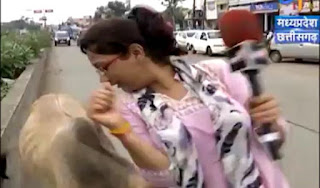 While addressing the annual meeting of Securit Council of UNO, Indian Foreign Minister Sushmeeta Swaraj mentioning Pakistani politicians said that have they ever thought that Pakistan and India got freedom together. But India is now identified as IT superpower while Pakistan is identified as a terrorist group. The only reason is that despite facing Pakistani terrorism India never ignored her economy and internal problems as well. She said that during the 7 decades different parties came to power but they continued the process of development and safeguarding the public. India established institutes of IT and Management but what did Pakistan establish, Lashkar-e-Taiba, Jaish Muhammad, Haqqani Network and Hizbul Mujahideen and safe havens for terrorists. India trained scientists, engineers, doctors but what did you train Pakistanis? You trained Jihadis, doctors save the lives of dying people while Jihadis kill the living persons. Your created terrorists are not killing the people of India but of Afghanistan and Bangladesh as well. The role of Pakistan in terrorism can be understood from this that Pakistan has to give clarifications to three countries. She said that she would like to say that the money that Pakistan is spending on terrorism should be spent on the people of Pakistan, in this way Pakistan will develop, World will get rid of terrorism and Pakistani politicians will get respect in the public. 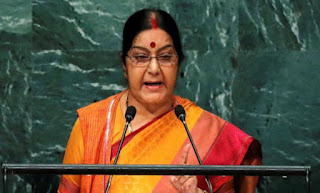 Indian Foreign Minister notorious for her hatred against Islam, Pakistan, and Muslim, exploited all the time given to India for expressing her hatred. While delivering speech in the Hindi she got so much emotional that BJP activists got worried that Sushmita Devi may claim that Mohin Bhagwat, Shankar Chariya Panday, Aseem Chir Jee, Sunil Doshi, Ramesh Opoy, Colonel Purohit, Sadhvi and other Hindu extremists involved in the terrorism and bomb blasts were all trained by Lashkar e Taiba; Hafiz Saeed had sent them to India after training them in the terrorist training camps for killing their own citizens in bomb blasts and terrorism so that Pakistan maybe proved a terrorist state. 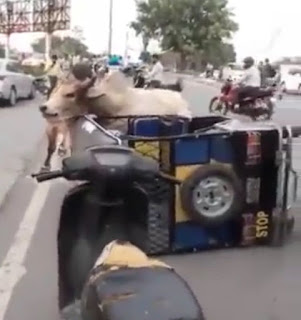 The persons involved in the burning for Samjhota Express to bomb blasts there was not a single common man involved but all were Indian Military Officers, the on-duty officer of Indian Military Intelligence, retired officers, leaders of extremist Hindu parties like Bajrang Dal and RSS. However, Sushmita Devi forgot about the Kulbhushan Yadav, state terrorist of India, living evidence of terrorism in the world arrested in Pakistan. The report issued by the UNO first time in the last years in June 2018 on the violations of Human Rights in Indian Held Kashmir was against the Pakistan army, which was mistakenly considered by the world against the Indian army. She should have said few sentences about the more than 150 deaths in few weeks and told the audience that what was the number of underage children and women killed as a result of firing by the occupying forces. What is the ratio of children out of 6000 who lost their eyesight due to the fire of pellet guns, the world would have easily understood that which is the terrorist country? 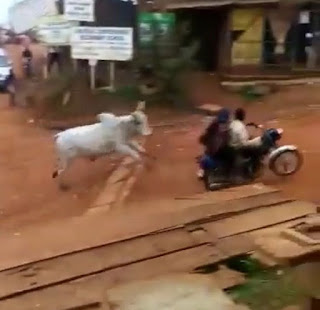 She forgot that in 1947 when India came freedom from British rule in 1947, Pakistan was born as a new country based upon the Two Nations Theory. In the way Extremist Hindus have made lives of minorities miserable, many nations are now demanding freedom from India on the basis of Two Nations Theory; Sikhs have gone much far in this regard. However, the recently reported problem in UNO is the GAO MATA (HolyMother Cow), worshipped in India, these cows are often seen wandering over the busy roads in India causing thousands of severe accidents. 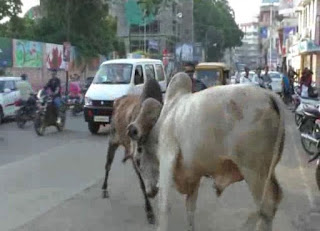 An Indian NGO, created a video based on the clips of CCTV camera footages from District Administration and Police showing the attacks of  Gao Matas on motorcyclists, vehicles etc. and the number of deaths due to these accidents. This video was presented in the UNO meeting and distributed among the participating envoys, demanding that for the sake of protection of Indian Public cows should be kept in control and not allowed to wander freely. After BJP’s coming into power, extremist Hindus have left these cows uncontrollable; according to the new law no one can beat or stop these Holy Cows. At the time when Sushmita Swarajwas telling Pakistanis about the development of India; a mob of Hindu terrorist was beating two Muslim Brothers with iron rods on the open road. These two brothers were carrying their own cow in a minitruck to sell it in the market. One of the brothers succumbed to the torture of Hindu extremists and died on the spot. The video of torture a Muslim to death was proudly recorded by extremist Hindu scientists, doctors and engineers and uploaded over the social media as an evidence of the development of India. In this video, extremists can be easily identified but there is no one to arrest or stop these Hindu terrorists for killing a Muslim inferior to a cow…