A Muslim Girl’s Cry for the Help from Indian City Jhansi! 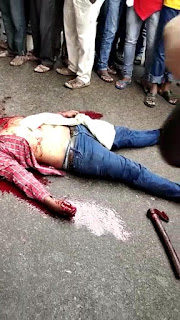 A video clip along with an audio message showing the murder of a young man in the hands of two murderers in the open public on the road in presence of hundreds of people has got viral on the social media. This crime of murder has been recorded in five different parts , showing a motorcyclists wearing helmet, stopped by few persons. One out of the person stopping the motorcyclists, attacks him with a small Axe. Motorcyclist attempts to save himself, in the meanwhile another person attacks him. The motorcyclist tries to run away but the attacking person does not let him runaway and keeps hitting him with the Axe. The motorcyclists fells down due to injuries, the attacking person easily kills him. Afterwards the attacker, throws the Axe on the murdered person,raises his arms to show his victory, shows punch  and calmly walks away from the scene. In the video, the traffic on the road is visible that is moving slowly, the pedestrians and all other person present on the spot does not bother to pay any attention to the death of a young man in the public, as this is a routine matter. The police vehicles are also moving on the road, bu they also do not pay an attention to the tragic scene showing that either this is a routine matter or they do not want to get themselves involved in any problem. 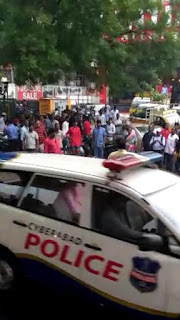 The video clip includes a message in the form of audio, she is telling while crying that she belongs to Barwasgar, Jhansi District of Indian Uttar Pradesh. After salam she tells that from last three days, Hindus are attacking Muslims. Hindu terrorists are attacking the Muslims moving on roads or streets. Muslim males are being murdered in their homes. She tells that few Hindu terrorists entered in their home by breaking the gate, they threatened all the family members to stay away and also threatened to murder her brother. She also tells that Hindu terrorists has raped Muslim women in their houses. She asking for help from all human beings who are listening to her. She is crying that in Jhansi, neither their lives, nor property is safe. She is crying that this message should be transmitted to the whole Muslims of the world so that someone may come to help them. According to her Jhansi Police is also supporting Hindu terrorists attacking Muslims.
The video that got viral makes it clear the young man killed in the presence of public is a Muslim and he has been killed by the Hindus of Jhansi. The video clip or the audio message does not make it clear that at what place this murder actually happened. However, if we search over internet for Hindu attacks over Muslims in Jhansi, it is clear that these attacks started on 15th August 2018. Few Hindu extremists took out a protest rally against Kashmiris chanting slogans over the loudspeakers fixed on their vehicles against Kashmir, Muslims were warned either to convert to Hinduism or leave India. 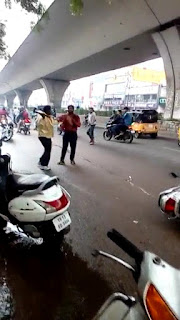 Here I would like to mention that Indian media portrays the Hindu attacks over Muslims as Hindu-Muslim riots in order to befool international community. How is it possible that only 6% Muslims of Jhansi take risk of riots with 90% Hindus? That is why whenever Indian Hindu terrorists start genocide of Muslims in India, world takes it as a riot between two groups despite of the massacre, gang rapes and looting of Muslim property.
Leaving the world aside, Pakistanis have also shown no concern over the massacre of Muslim in India. How is it possible that genocide of Muslims is going on, Muslim women are being raped, the dead bodies of Muslim women are being raped after digging up their graves and our media is showing us the activities of the Indian actors? 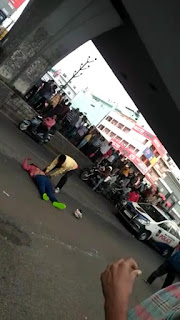 Whether these are the acts of genocide of Muslim, rapes of Muslim women etc. this does not happen itself, Hindu politicians and leaders especially order Hindu extremists for such barbaric acts. The Chief Minister  of Uttar Pradesh, Yogi Aditya Nath who is considered as avatar of god, his idols has been placed on different places and being worshiped. During 1999 and 2007, he was arrested for inciting people to massacre Muslim and rape Muslim women. Now due to his hatred against Muslim he is being considered as the Modi of the future. When the person notorious for the massacre and rapes of Muslim women is the Chief Minister of Indian province, than how extremist Hindus can be restrained from crimes against Muslim minority. 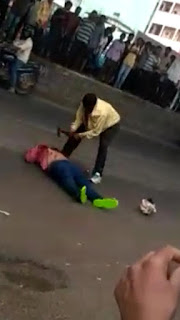 As long as the request and cries of Muslim girl of Jhansi is concerned she should keep in mind that this is not the era of the Muhammad Bin Qasim, the power of today’s Muslim rulers is not their belief in Allah but wealth of oil, greed to loot their country, palaces in the Western countries, construction of tall towers and buildings etc. how these Muslim rulers who cannot say anything on the massacre of Muslims and Kashmiris how will they help her...