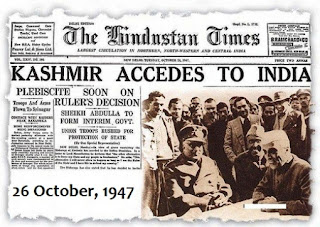 Since its independence in 1947, Pakistan is facing Indian conspiracies against its integrity. The conspiracy started with the deviation from the formula of the division of Hindustan, stopping financial resources and weapons that were to be inherited by Pakistan. The second part of the conspiracy against Pakistan was the intentional inclusion of districts and areas having the Muslim majority, attack on immigrants forced to migrate from their areas. In these attacks hundreds of thousands of Muslims were martyred in cold blood, Muslim women were gang-raped, thousands of Muslim women were kidnapped. Whatever happened to the migrating Muslims and their families is the darkest chapter of the division of India. Although, pro-Indian elements in Pakistan, deny all these bitter realities; they have left no stone unturned to truncate the bitter realities of the division of India from the history.

In this regard under the conspiracy of AMAN KI ASHA, attempts have been made to remove the chapters of Indian atrocities committed against the Muslims so that new generation can be brainwashed to accept the bright aspects of India. The third conspiracy of India against Pakistan was the invasion of Indian army in Kashmir on 22 October 1947. The attack over Kashmir was not without any meaning. If India had succeeded to fully capture the Kashmir, on the one hand, all the rivers coming from India would have been fallen in the hands of India, Pakistan’s agriculture would have been destroyed, Pakistan’s link with China would have been cut. India would have established the ground link with India via Wakhan. Due to financial problems Pakistan would have acceded to India or become dependent on India just like as Bhutan, Nepal or Maldives. The prophecy of extremist Hindus would have proved to be true that due to internal chaos, economic problems and administrative failures, Pakistan would be forced to request Congress to make Pakistan a part of India. But Pakistan stopped Indian army’s invasion in Kashmir and saved 1/3rd part of Kashmir from falling into the hands of India. Pakistan stood in front of Indian imperialist plans. Despite the shortage of weapons, ammunition and military power, Pakistan faced Indian army for one year and two months, making India lose her morale.

Seeing the defeat in hands of Pakistan and losing the rest of the Kashmir, India went to the General Assembly of UNO for help. UNO approved a resolution that Kashmiris would be given chance to decide their fate via referendum either to choose India or Pakistan. Indian leadership’s promises and cries in the UNO were just betrayals to lend time in which India succeeded especially due to the support of Western countries like Britain. With the signing of the cease-fire, India started conspiracies against the integrity of Pakistan. If we analyze the history of Hindus, teachings of Chanakya and their habits; it becomes evident that Hindus prefer conspiracies over fighting the war. Conspiracies, betrayal, ambushes etc. are their main weapons. If we look at the seven-decades-old history of the neighborhood with India; it becomes clear that India has never accepted Pakistan as a sovereign state.

Separation of Eastern Pakistan, stopping waters of Pakistani rivers, armed interference in Balochistan through her trained terrorists and conspiracies, anti-Pakistan campaigns on diplomatic levels and friendship with the rulers of Pakistan all expose the Hindu mentality and their tactics. Despite being aware of these bitter realities the presence of persons having the love for India in Pakistan shows that how much India is following the Chanakya's teachings. The worst example of Chanakya's policies in India is that India blames Pakistan's policy for Kashmir for bad relations between India-Pakistan. The bitter reality is that Indian enmity against Pakistan is not due to the Kashmir dispute. Apparent Indian friendly relations with Bangladesh are limited to the Indian imposed government of Haseena Wajid. India is well aware of the fact, that majority if Bangladeshi people consider themselves as slaves of India. Haseena Wajid’s acceptance of Indian claims over rivers of Bangladesh and border areas; the signing of giving India access from Kolkata to Agartala in June 2015 are such steps of  Haseena Wajid that had pledged Bangladesh’s independence and national prestige to India. India does not have Kashmir dispute with China, Bhutan, Nepal or Sri Lanka but imperialist designs of Hindu India for Akhand Bharat. Indian leaders consider Pakistan as a big hurdle for their plan of Akhand Bharat. Pakistan’s strength and independence is the source of courage and morale for more than a dozen freedom movements active in India. Now Sikh, Gorkha’s and seven Indian states across Bangladesh want freedom from movement following the Two Nations Theory of Pakistan.

Quaid’s statement that Kashmir is vital for Pakistan makes Indian Occupied Kashmir not only incomplete agenda of Pakistan but also a problem for the integrity and sovereignty of Pakistan. Indian policies, plans, diplomatic policies and war preparations all are focused around Pakistan. Indian Prime Minister Modi expressed his anti-Pakistan sentiments while addressing Indian Parliament on the eve of the annual budget session on 7th February 2018 objecting policies of Jawahar Lal Nehru and Congress. This is not Modi but India’s Hindu mindset which has never accepted Pakistan. In the way Modi criticized Congress, on the one hand, he wanted to insult Nehru family while on the other the freedom of Pakistan was his main cause of anger. Modi said that faulty policies of Congress in 1947 changed the map of sub-continent and India is still facing its result in the form of Pakistan. Talking about the Kashmir dispute he said that if Nehru had not been Prime Minister of India, whole Kashmir would have been part of India. Indian Prime Minister’s speech in the Indian Parliament shows the mentality of Hindu leaders against Pakistan. This should be enough to open up the eyes of the Pakistani rulers working for friendship with India at any cost…