The Betrayal of India: Revisiting the 26/11 Evidence 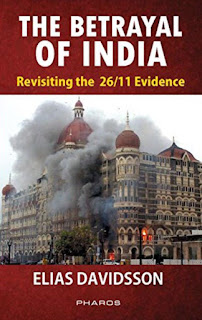 In November 2008 the Indian plan to defame Pakistan on the basis staged drama of Mumbai attacks has been unveiled by the German Author, in his book "The Betrayal of India: Revisiting the 26/11 evidence". In this book, the author has proved based on various evidence, eyewitnesses, references etc. that Mumbai attack was staged by India herself with the full support of USA and Israel. In order to provide authenticity to Indian Drama, RAW exploited Indian media and courts as well. After book of the Davidson, Indians are forced to believe him because neither he is Muslim nor he has any link with Pakistan. the painful aspect is that after Mumbai drama few elements within Pakistan supported Indian Propaganda against Pakistan.

We had already disclosed the reality of Indian propaganda in 2011 with the references that have been mentioned by Elias Davidson as well. Please click on the link to read the full article published in 2011.