At the time of suicide bomb attack at Church in Quetta, there were more than 400 Christians present in the Hall of the Church. The hurdles faced by the terrorists in entering the Church, the closing of the main gate by the Gatekeeper and in the way Quetta Police personnel faced the terrorists who succeeded to jump over the gate, the whole nation has seen the sight of action as it was captured by the CCTV cameras. In this fierce attack at least 9 people were killed during the cross firing; if terrorists have succeeded in entering the main hall, great loss of lives would have witnessed. Especially, such tragedy days before the Christmas would have badly hurt the name of Pakistan. Moreover, the timing of the attack was also important as within few hours the New Policy of American President was to be declared. This declaration has nothing more than the old threats to Pakistan and demands for “DO MORE”. After the Trump’s speech, the report over security issues in Afghanistan prepared by Pentagon was also issued, in which the strongholds of Haqqani Network, ISIS, TTP, LeT and Islamic Movement of Uzbekistan including Al-Qaeda in the Pak-Afghan border areas has been mentioned.
American media rejected the report terming it as an old report prepared during the reign of George W Bush, only two new entries LeT and ISIS were added to authenticate the report as New report. But the ground realities are different from the facts mentioned in the said report. Critics of Trump also wrote that there is no tradition of the declaration of New Security Policy by the New President of America. Internationally, China criticized American Security Policy and said that in the light of the changing situation, America will have to get out of the “Mindset of Cold War”. America is still busy in creating fear in the minds of Americans regarding China and Russia as enemies. America will have to change her policy of abusing and pressing others for her interests. China made this clear to America that Pakistan is standing beside Pakistan regarding terrorism issue. The USA should realize the sacrifices of Pakistan and get out of the Cold War mentality otherwise results will not good for the USA. China is well aware that America is supporting India for sabotaging CPEC. Despite all the steps taken to stop terrorism the incidents like suicide bomb attack in Quetta CHurch, target killing etc. all such activities are being executed via Afghanistan, the nexus between Indian and Afghan agencies with the support of the USA in Afghanistan is the main reason. 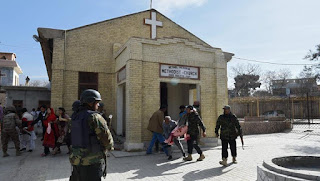 After harsh reaction from China, Russia also expressed concerns over the American Security Policy. The reaction of China and Russia over American policy are good for Pakistan but Pakistan has to face the threats to its integrity alone. The political chaos shows that Pakistan is in the war, the economic situation in Pakistan is deteriorating rapidly. The burden of external loans is increasing, the increasing prices, unemployment, corruption and moral deterioration is not going to end soon. The situation of health and education is deteriorating as govt. has ignored these sectors. Investors have opened the shops of education and health. Who can pay the price can buy these facilities others should remain uneducated and ill considering it as their fate. In such a situation when the enemy is threatening, in the way rulers should respond they are not responding in this way.

Before this only India used to threat Pakistan, but now the attitude of Trump is also threatening and aggressive. All that Trump does not want to say himself he uses Vice American President and Foreign Minister to give these threats. In Dember 2017, addressing the Atlantic Council, Rex Tillerson said that if Pakistan did not take action against safe havens of terrorists in tribal areas of Pakistan, Pakistan may lose control of these areas. The terrorists who are targeting Kabul may change their mind and attack Islamabad as well. In the meanwhile, the discussion of nuclear assets of Pakistan was started afresh that how terrorists may gain access to these nuclear assets. While USA sent hundreds of CIA Blackwater operators with the cooperation of Pakistani Ambassador to USA Hussein Haqqani in 2008. These operators despite their efforts and terrorism waged by Tehreek Taliban Pakistan (TTP) failed to point out the location of nuclear assets of Pakistan. 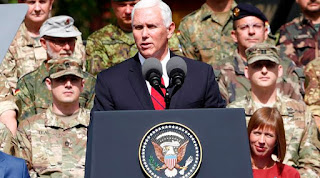 US Vice President in Kabul warned Pakistan to lose much by harboring terrorists.

The articles published with the title, “Let Us Buy Pakistan’s Nukes” published in the American newspapers are still echoing, which can be seen in the light of the current deteriorating economic situation and increasing burden of external debts. As long as the capability of Pak army for protection of the borders is concerned, Pakistan army is in active war since 2004 and sacrificing lives. Such a war may have been faced by the USA in Afghanistan and despite all latest weapons, well-trained manpower, modern technology etc. they are facing defeat in spite having the support of NATO and allies. In 2014, US President has not decided to withdraw the army from Afghanistan leaving behind few thousand soldiers. Obama administration has realized that they cannot succeed in Afghanistan while Trump administration wants to stay in Afghanistan and wants that Pakistan should act as a shield for them. Pakistan is not ready to render such services to the USA. Pakistan has rejected the threats of Trump and Rex Tillerson. By establishing the Border Management over Afghan Border and ongoing Rad-ul-Fasad operation in the country, the terrorism has been controlled. However, complete fencing and ceiling the border through trench will take time. The presence of millions of Afghan refugees in Pakistan is also another cause facilitating terrorism in Pakistan. Such loophole would be controlled soon as a whole. 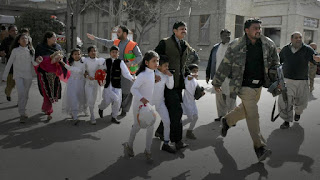 The real problem of Pakistan is the internal chaos and corruption which has affected all aspects of life. Good governance is the basic duty of the government. The lag in good governance causes chaos and threats to the integrity of the society. Extremism is fueled. All political parties should sit together and chalk out a plan to face the threats by Americans. Although, Pakistan’s Foreign Ministry has reacted over the American threats violating the moral and diplomatic values. But this is not enough; America will not attempt direct interference in Pakistan but will attempt to convert the internal chaos in Pakistan into 4th and 5th Generation War which cannot be faced by guns and tanks. United we can face these threats.