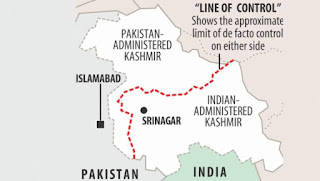 Historically, besides professionalism and military expertise what differentiated army from the rest of the public was the habit of avoiding the lie. There is a reason for that; a little lie may doom the greatest army with defeat. That is why during training every soldier is trained to tell truth and keep steadfast to the truth. The soldier has already dedicated his life, during the war his lie cannot save him from the sword, arrow or upcoming death; so why he should tell lies. This is the point that fills soldier’s mood and accent of speech with harshness but he does not tell lie; Generals and Chief of army staff is an ideal for his soldiers. Due to the habit of soldiers telling the truth, such persons are selected for diplomats for solving disputes between states who have the art of twisting the facts and even if they say something wrong, the clash can be avoided by calling it politics or diplomacy.
But India that is already exploiting diplomatic values, violating basic human rights; Indian Generals have also removed the value of truth from their training and discipline. Despite Indian tortures and barbaric acts of Indian soldiers in the Indian Held Kashmir, the freedom movement of Kashmiris that is going on since last 7 decades has made Indian soldiers and Generals psychic; they are dreaming themselves as the world’s bravest and best army without testing themselves in the war. Their hysterical situation is further boosted by Indian media. Indian Generals feel calm in giving the movie like statements.

Although Indian army did not fight the 1971 war, its outcome caused shame to Pakistan, however, since then Indian army has not been involved in any war. In the Kargil war, if the USA had not come to rescue Indian army and pro-Indian elements have not supported India, Kashmiri dispute has been resolved. Despite this much has been said about the end of the Indian army from within India. A few days ago the lesson taught to Indian army by the Chinese is a separate story.
The bitter reality is that in the Indian Held Kashmir the stone pelter Kashmiri children and India and outside of India, and Pakistan army has badly crushed Indian army. Terrorists operating in Pakistan’s tribal areas and Afghan areas adjacent to Pakistani borders were trained by India; through suicide bomb blasts and terrorist attacks, India was happy that she had trapped Pakistan. Indian Generals, heads of secret agencies have not even thought that their army of terrorists will be crushed in such a way in Pakistan. Not only this, important terrorist Kulbhushan Yadav will be arrested in Pakistan red-handed. Indian army had to face shame not only on the diplomatic level but on defense as well on the international level.

During this, on 18 September 2017, alleged 4 terrorists attacked Headquarters of 12 Brigade, in the Uri area near Line of Control, District Bara Mullah of Indian Held Kashmir. In the attack of terrorists before sunrise, 19 soldiers of 10th Dogra and 6th Bihar Regiment were killed. According to Indian media and Defense Minister, all 4 terrorists were killed but their dead bodies were not shown to the media. The Indian government, army, and media blamed Pakistan army for the alleged terrorist attack and whole India was fueled with the fire of revenge. At the time when Indian govt. and the army was fueling revenge in Indian public; few Indian analysts (including retired Indian army officers) were not agreed with the statement of Indian govt. and army. They had various questions out of which one was that how 4 terrorists succeeded to enter Indian Brigade Headquarters passing through different check posts while only one way was being used for entrance. According to the Indian media reports, accidentally fire erupted in the kitchen where the storage of oil was present. The fire took over the tents, where army soldiers were sleeping after getting drunk and were burnt.

2 months ago, whole Indian Held Kashmir was protesting against India over the martyrdom of Burhan Wani. Despite using pellet guns and other lethal weapons, baton charging, and tortures Indian army failed to control the protests. After Uri Brigade attack, India exploited it for fueling war mania against Pakistan. It seemed that India will attack Pakistan anytime to revenge Urri attack. Pakistan army was fully prepared for expected misadventure. On 29 September 2016, DGMO Lt. General Ranbir Singh, held a press conference in which local and international journalists were present; he told them that Indian army has successfully done surgical strikes at 2 places in Azad Kashmir of Pakistan. On the end of his surgical strikes’ story, journalists wanted to ask questions, but Indian DGMO left the press conference. Indian media while publishing the claims of the Indian DGMO expressed their concerns as well. They were not ready to accept that Pakistani army already waiting for Indian attack was unaware that from where, how and what place Indian army attacked in Azad Kashmir, killed hundreds of Mujahideen and returned.

Indian General D S Hoda, Commander 16th Core in an interview to Indian Express on 18th September 2017, left behind the Hindu fiction stories. In his interview, he said that 2 Special Units of Indian army were being trained since 2015 in the jungles of the Indian Held Kashmir. As soon as their training over, soldiers were impatiently waiting for operation across the LoC. However, due to the political and diplomatic hurdles, they were not sent across the border. After the attack on Uri Brigade Hq, the soldiers of the special unit were in anger; it was feared that if they were not allowed for operation in Pakistan, they may resign in anguish. On 28th September 2016, they crossed LoC from two points, passing from the check post of Pakistan army reached training camps and within a short time of 4 hours they killed all the trainee mujahedeen and returned safely. According to Indian General, not even a single soldier got a bruise. His interview proves that Indian Generals can prove to be successful story writers in Bollywood.