First Pakistani General to Demand “DO MORE” Against Terrorists! 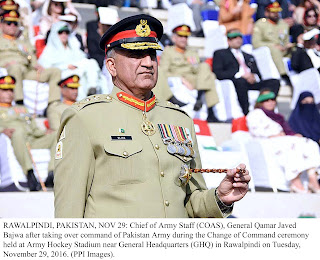 In November 2016, when General Qamar Bajwa took the command of Pakistan Army, Pakistan was entering into the second phase of the long war against terrorism. The first phase was that in which terrorists have established training camps, the army like operational headquarters, weapons manufacturing units, for suicide and terrorist attacks all over the Pakistan. All these terrorist establishments were in the areas adjacent to Afghanistan border. From Afghanistan, enemies of Pakistan were supplying these terrorists with latest automatic weapons, operational plans, instructions and heavy funds. Pakistan army cleared all the tribal areas from terrorists after countless sacrifices of lives. The operation was launched against the terrorists in the whole country. Many terrorists were killed in the operation in tribal areas while the rest of them either fled to Afghanistan under the safe heavens of power players in Afghanistan or garbed themselves like common citizens. The leadership of these terrorists had fled to Afghanistan before the start of the operation. They were continuing their terrorist activities from Afghanistan with the support of the Pakistan’s eternal enemy.
After the destruction of the terrorist networks in Pakistani tribal areas, it was not acceptable for India to stop her terrorist activities and war against Pakistan through Afghanistan. India changed her tactics and started unprovoked firing over LoC (Line of Control Kashmir) targeting civilians in Azad Kashmir while on the other hand the drama of Urri Sector attack was staged as well. Hoping that on the one hand the credibility of Pakistani army would be hurt in the eyes of Pakistanis while Indians will be impressed as well that Indian army has the capability of surgical strikes like Americans. Indians wanted to engage international media and community on the LoC and tensions between India and Pakistan so that they cannot understand the negative role of Indians in Afghanistan and terrorism in Pakistan with the support of the NDS.
This was the difficult situation when General Qamar Bajwa took charge as Chief of Army Staff (COAS). As soon as he took charge he had to face Indian unprovoked shelling over LoC, ensure law and order within the country, searching for terrorists and neutralizing, all are his duties. The most difficult task was to stop infiltration of terrorists from Afghanistan; the interference from Afghanistan, aggressive Afghan attacks, and propaganda all are the biggest test of his professional capabilities. Especially the propaganda that is going on within the country attempting to prove him weak.
General Qamar Bajwa decided to establish strict Border Management System over the secret and open ways of entrance in Pakistan over the Afghan border so that unchecked movement across the border may be checked. When Pakistan started work on this project, Afghan National Army started cowardly attacking Pakistani army check posts over Turkham and rest of the border. In this way, Pakistan army was under Indian army’s attack on LoC while on the Afghan border, Afghan National Army was attacking Pakistan army at the beck and call of Hindu India. General Bajwa visited LoC many times, to encourage the troops on the forward posts and instructed them to give a befitting reply to Indian aggressiveness. A clear message was sent to India that any mischief or aggression would be dealt strictly. The aggression of enemy that has been going for last 15 years over Pakistani borders is not a big problem for Pakistan army because the sole purpose of Pakistan army’s preparedness has been to defend borders.