Criticism over Security Agencies in the Name of JIT Report 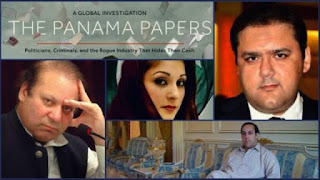 Everyone knows about the leaks regarding Panama Offshore Companies that no institution or department of Pakistan is involved in it. Leaders of many companies have to be ashamed in front of their public due to these leaks. Similarly, including Sharif family, names of hundreds of Pakistanis are included in the list. From India no one from the ruling class was involved in the Panama scandal however, many businessmen and Indians from other segments of society were involved. As Sharif is in power nowadays, so the said leaks proved to be ‘hot cake’ for the media. The ongoing political tensions in the country also played its role in the Panama scandal and it is continuously being discussed overt the media. These leaks were disclosed by the journalists from International Consortium Investigation Journalists (ICIJ) belonging from different countries. The point of attraction for the Pakistanis was the interview of the elder son of Prime Minister’s son regarding the property of Sharif family abroad and flats in London; everyone was astonished that why did he need to give such an interview. This interview became the reason of the hot discussion of Sharif family’s property in the media.
During this media discussion, the statement of Prime Minister’s Daughter was reported in the media in which she claimed that she has neither any property in Pakistan nor abroad. When the Pandora box of Sharif family’s offshore companies was opened it was learned that Sharif family was aware that international consortium of journalists was busy in collecting the information about the elites of the world having unnamed businesses. As a pre-planning, the interview of PM’s son was especially given to media so that nation may be taken into confidence about the property of Prime Minister and his family. So how did security agencies of Pakistan became the target? Why they are being blamed for the conspiracy?
After 2008, there is democracy in Pakistan without any break. Peoples Party of Pakistan completed its 5 years tenure successfully. Now Nawaz-League is about to complete its tenure. No matter through NRO the restoration of democracy is a good news. If our politicians had used this period for resolving the issues of public and accountability, now they would not have been afraid of being over thrown. Our political elite may use repeated army interference in the power as a defense against poor performance of the democracy but could not satisfy the public drowning in the financial and other problems like unemployment, inflation, injustice, costly fees of private schools especially the failure of the govt. to ensure law and order in the country. In contrast to this, the economic revolution in the lives of the relatives these politicians is also clear to all. In order to check such corruption, the accountability is considered inevitable for the democratic system which should be implemented without any exceptions in true letter and spirit.
Pakistan came into being in August 1947. Quaid Azam Muhammad Ali Jinnah, Nawab Liaqat Ali Khan and their colleagues who were landlords by generations adopted honesty and simplicity in order to fulfill their dream of Pakistan under Two Nations Theory. Today’s politicians cannot be compared to our ancestors; these politicians take it as their inherited right to have the lifestyle of Kings despite being rulers of the already indebted country. Accountability is a conspiracy against democracy for them. This is the dark side of the inherited politics that a single family owns the whole party and no one can dare to have the difference of opinion. When such family comes into power they expect loyalty from government machinery as their personal servants. In order to keep the departments in their control, such officers are selected for higher posts who are not eligible for the said post so that they remain loyal to them and follow all of their orders. In such a situation the increase in the wealth of the family by leaps and bounds because there is no one for accountability. Law becomes enslaved to the ruling class otherwise democracy is the name of the higher moral standards of the rulers.
In Pakistan, the issue of the Panama Offshore companies has been spoiled because the leaders of the state departments are unable to investigate against the rulers. When parliament failed to fulfill its duties the issue was taken to the roads in the form of protests. When Pakistan Tehreek Insaaf  (PTI) took the issue to the court, the court denied to hear it due to the technical basis of the case. When protest over the roads increased, Prime Minister himself wrote a letter to the Supreme Court, requesting the court to start accountability of himself and his family which was a positive step. However, when Prime Minister, his family’s lawyers failed to satisfy the court about the property of the Sharif family so the court ordered to establish Joint Interrogation Team (JIT) on which ruling party celebrated it. However, after two months before the submission of the report by JIT to Supreme Court, Sharif family attempted to make JIT disputed.
They had realized from the questions asked by JIT that investigators have found such facts which cannot be falsified by them. When the report was presented before the court, they started criticizing Army and ISI without taking their names that they are the real writers of the script of the JIT report as a conspiracy against the ruling Sharif family. As JIT was established on the orders of the Supreme Court and investigation report has been submitted to the court so it is to be decided by the court. There is no question of conspiracy. The support provided by the national departments for investigation on the orders of Supreme Court was their duty which they have fulfilled. Those ministers who are claiming the JIT report as the conspiracy of Army and ISI should not forget that whether it is census, accidents or natural calamities etc. in spite of fulfilling their duties they call army and politicians become free from all of their duties.