Pakistan is not only facing worst internal mismanagement but political chaos as well. But we are unable to understand the threats over the borders and the ever changing emergency situation in the country. If we suppose that our elite govt. personalities and foreign ministry are not only functioning properly but also having eyes on the ever-changing situation as well. While the ground realities are that Prime Minister is acting as Foreign Minister himself and the Foreign affairs are being dealt by 2 elders; one is Sartaj Aziz having the age of 88 years considered as Economist due to his degrees in commerce from Punjab University and afterward Masters Degree in Developing Economics from Harvard University USA. The second person is Tariq Fatimi 72 years old, but due to involvement in Dawn Leaks, he has stepped away from international affairs of Pakistan.
What happened in the last govt. is not hidden from anyone; Hussein Haqqani despite being Pakistani Ambassador was so much active in protecting US interests that he may be included in the list of the enemies of Pakistan. Exploiting these internal weaknesses, Pakistan’s eternal enemy India blamed Pakistan for supporting terrorism on through propaganda and active Foreign Ministry. This propaganda despite being based upon lies has defamed Pakistan over the international level. In contrast to this the few bomb blasts in India were activities of Indian secret agencies. When the elements involved in bomb blasts confessed their involvement in Indian courts but Pakistani governments preferred to remain silent.
The statement of US Foreign Secretary Chuck Hegel in 2011 during a lecture at Cameroon University Oklahoma that India is involved in interference in Pakistan also went in vain as Pakistani officials ignored it. Our foreign ministry and govt. kept criminally silent. US official said, “Indian is exploiting Afghanistan against Pakistan as a proxy battlefront”. Chuck Hegel was questioned to comment over the Pakistan’s cooperation regarding the war against terrorism. At this time Indian propaganda was at its peak and the one asking the question was hoping that Chuck Hegel should also support Indian stance against Pakistan that India is involved in terrorism in the countries around it especially India and Afghanistan and that was why Pakistan was being asked to “Do More” but the answer given by US official was not as expected. He said;
“India has always used Afghanistan for its own war. India is creating problems against Pakistan from Afghanistan and using Afghanistan as a second front against Pakistan”.
That is why despite presence of the big number of representatives of Media, Pro-Indian Lobby in Western Media succeeded to suppress this important statement.  The statement was reported when The Express Tribune published the clip on its website on 25 February 2013. Although Pakistan remained silent, however, Media fulfilled its responsibility by reporting it.
Try to calculate that from 25 Feb 2013 to onwards the number of Pakistanis killed in terrorist attacks, bomb blasts etc. at universities, schools, markets, places of worship and the soldiers who lost their lives in the war against terrorism. This war is still going on. A new threat of ISIS supported by India is establishing its foothold. Russia distanced from India because Indian RAW and Afghan NDS were supporting the establishment of ISIS in Afghanistan with the support of CIA. 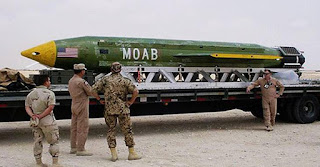 In such a situation on 13 April 2017, US Air Force dropped the 9797 KG bomb in the Eastern Province Nangarhar of Afghanistan claiming that it was dropped over the underground hideouts, tunnels, and the cache of weapons of ISIS. Afterward, US gave the news that this bomb known as the Mother of All Bombs (MOAB) has broken the backbone of ISIS in Afghanistan. 91 ISIS fighters were killed in this bomb attack. This is a separate phenomenon that a suicide jacket weighing 9kg only at the shrine of Hazrat Laal Shahbaz Qalandar took lives of 91 people than what should be the number of persons killed in bomb blast weighing 10,000 Kg.
The important information for Pakistan is the number of Indians killed in this bomb attack. Were all of these members of ISIS or officials of RAW training and establishing ISIS. India has to give clearance that what her citizens were doing in ISIS hideouts. India has been declining that RAW and India has no role in the establishment of ISIS. Then what were Indians doing in ISIS hideouts? These were those who were killed in the MOAB but how many other Indians are still providing safe hideouts and support to ISIS in Afghanistan. The news of 91 ISIS militants killed in Afghanistan was broke by Indian media on 14 April 2017 including names and details of few Indians killed in the attack. But no reaction from Pakistani side has ever been reported just like past. Indian involvement in the establishment of ISIS to exploit this against Pakistan on appropriate time has been reported. Now when even Indian media has acknowledged that Indians have been killed in the bomb attack along with militants of ISIS why our Foreign Ministry is still criminally silent.