Increasing Disorder in the Indian Army: A Threat to the International Peace...


Suicides, killing colleagues or officers in anger etc. such like incidents have long been reported in Indian army since long especially in the Indian Occupied Kashmir (IoK). According to Indian survey, 30% of Indian soldiers out of 800,000 personnel deployed in IoK are suffering from mental disorders. The percentage of Indian soldiers suffering from such psychological problems is on the rise despite various attempts to improve the situation. The reasons for these problems have been disclosed as hatred from the Kashmiris, insulting behavior of the Hindu officers, permanent deployment and Leave issues etc.
However, on 15 January 2017, the video by Indian soldier namely Taj Behadur spread virally over the internet especially social media which disclosed the corruption and disorder within Indian army to the whole world. Taj Behadur pointed out the ration that is given to lower level soldiers which are of such poor country that perhaps animals will not eat it. Indian govt. and army had not been able to face the video of the Taj Behadur which resulted in the insult of the Indian army on the international level. Another, video of Yagya Pratap Singh opened another Pandora box through a video against his officers. Partap dared to write a letter to Indian President, Prime Minister and Defense Minister against the insulting behavior and verbal abuse of the Indian army officers. He was compensated for his complaints in such manner that he was punished severely. The punishment given to him could not stop him and he recorded a video message in which he told the world that he had not disclosed the secrets of Indian army for which he was tortured physically and mentally.
The echoes of tyranny over Yagya Pratap Singh had not subsided that after four days Sipahi Jeet Singh of Central Reserve Police disclosed a list of complaints. On 28 January 2017, Indian soldier Nike Bhagat disclosed the disorders and corruption in the Indian army. Nike Bhagat disclosed that on the one hand corruption has been an integral part of Indian army officers; on the other, hand the moral crimes have become identity of Indian army’s uniform. Only 40% of the ration for the soldiers is given to the soldiers while remaining 60% is misappropriated by Regiment Commander through Quarter Master out of which percentage is given to Brigadier and higher officers. According to him Indian officers treat soldiers as their personal servants or slaves. They are used to wash the clothes of the officers families and in case of denial they are imprisoned in the Quarter Guards and tortured physically as well as mentally. 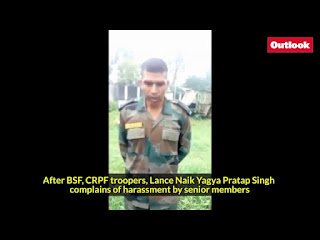 This is not the story of one regiment or unit but whole Indian army is stinking with such corruption and misappropriation. All the facilities are just for officer while the insult is for the soldiers. Nike Bhagat alleged Indian officers of grave moral crimes including raping the wives of their sub-ordinates. In order to fulfill their lust, those soldiers whose wives are beautiful are deployed in such areas from where they cannot return after duty hours. Nike Bhagat’s video has evaporated the patience of Indian govt. and Command of army.
In spite of addressing the complaints, Indian Interior Minister Raj Nath has asked Indian Army Chief General Bappan that all such complaints are against the discipline and conspiracy to lower the morale of the soldiers. If this has been stopped here the echoes of tyranny of Indian army officers might have died away taking the video messages of Indian soldiers as personal enmity. But two months ago the wife of Taj Behadur expressed concerns to Indian media in News Delhi that her husband might have been murdered by Indian army officers as he is MISSING and Indian officers are threatening her to be ready for grave consequences. After few days the news of murder of Taj Behadur were reported on social media in IoK. Indian army’s spokesperson rejected this news as rumors but he did not provide any evidence of Taj Behadur being alive.
On 24 March 2017, an Indian Internet News Website posted a picture of Tej Behadur’s dead body in uniform having signs of torture. Indian govt. and army rejected the picture terming it as fake. The discussion over the social media is about the genuineness of the picture and if it is fake than where is Tej Behadur.
The video that has been leaked currently is more severe which shows that Indian army’s Command and Control System is going towards destruction. This video shows lack of communication between officer and soldier. This video shows the recording of investigation of a soldier in the room of Second in Command (2IC) of the regiment. During the investigation, soldier gets hysterical loosing control. He ignores that not only 2IC but two other officers along with Subedar Major are also present. Soldier is complaining that Command Officer (CO) of the Regiment is disfavoring whole unit just for favoring his favorite soldiers. Through these favorite soldiers CO is involved in corruption. On protesting this corruption he was illegally detained in Quarter Guards. During the illegal detention the favorite soldiers of CO tortured him and no one was allowed to meet him. Neither his detention was brought on the record nor Court of Inquiry was held. He wants to meet 2IC in order to present his complaints which is his right but he is not allowed. During detention he is not given any medical care when he falls sick. As per military rules and regulations Duty Officer of Regiment or Duty JCO is bound to inquire into the condition of soldiers detained in Quarter Guards but he is even denied of such facility. He is not allowed to contact his family. These are the tyrannies which the soldier brought in 2ICs room for inquiry is telling.
Another important aspect of the video is that this video should have been recorded by some officer of the unit otherwise a soldier cannot dare to make video in the room of 2IC. How this video was leaked out.


One may say that it is the internal problem of the Indian army we have nothing to do with it. We should keep in mind that India has practically waged an undeclared war against Pakistan. The situation at LoC is known by everyone. India is a nuclear power as well. Whether it is politics or war doctrine everything is based upon enmity against Pakistan and targeted to conquer Pakistan. The army who is short of discipline, Generals are involved in corruption and tell the fake stories of operation in Kashmir in order to get awards. Such a situation of Indian army is known as madness whose cure is with Pakistan amry but we are not allowed by international law. In such a situation Pakistan needs to be watchful…