Hindu Extremism is on the Rise in Uttar Pradesh!

After Indian Election Commission allowed election campaign in Uttar Pradesh (UP) from 04 Janaury 2017, Hindu extremists broke all the records of anti-Muslim statements and campaigns. All the central gatherings were held in the leadership of notorious Hindu extremist Yogi Aditiyanath who is believed as terrorists by moderate Hindus. In front of Central Jamia Mosque of Muslims in a gathering the colleague of Yogi threatened Muslims that either they should convert to Hinduism, change their names or should get ready to die. He incited Hindus to dug up Muslim’s graveyards and rape dead bodies of Muslim women until the sounds of Adhan from Mosques are not silenced. 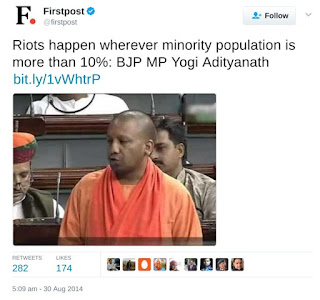 Yogi Aditiyanath also threatened Muslims to get ready for a massacre like that of Gujarat in 2002. In the election campaigns Muslims were threatened to either caste votes in favor of Hindu extremists or stay at home. Muslims of UP know the past of the Yogi well that how he and his extremists are involved in genocide and gang rapes of Muslim for which until now no action has been taken by Indian Police. Astonishingly, not only Indian Election Commission remained silent over anti-Muslim campaign but Indian media as well. This was the fear of Hindu extremists that Muslim were elected to only 24 seats as compared to 69 in the last elections and BJP won 319 seats out of 403. 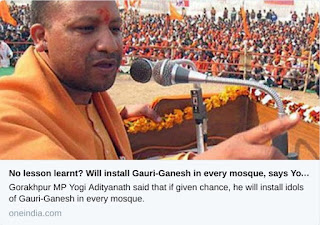 This is the biggest success of BJP since 1980 after Indira Gandhi, which is being termed as biggest change in the Indian politics. Those blaming Quaid Azam Muhammad Ali Jinnah for promoting Muslim extremism as a result of Partition of India are worried over the spreading Hindu extremism in India which proves that Two Nations Theory of Jinnah was correct. Quaid Azam and his colleagues have truly identified that Hinduism is based upon classes of human beings and inequality. The slogan of secularism by Hindu leadership in 1947 was nothing more than a delusion. 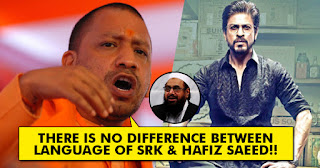 In current elections BJP was so much sure of her success that not a single Muslim was nominated as a candidate. Perhaps they wanted to give the message that Muslims will have no role in the future politics of India. In 1980, when BJP started practical politics, no one has ever imagined that a party that took birth out of extremist Hindu organizations like Rashtriya Sevak Singh (RSS) would gradually take over India. In the population of 204 million, Muslims have population of 3876000 that is more than the population of biggest Islamic country. Such a big population of Muslims is on the mercy of Hindu extremists because election of Yogi Adityanath as Chief Minister shows that Modi does not want development or economical development but increase in the Hindu extremism.

Adityanath with the oath taking announced to go to Ayudhiya for launching of construction of Ram Mandir at the place of Babri Masjid about which Indian Supreme Court has stepped back to issue any verdict and referred the dispute to be resolved through arbitration. The construction of Ram Mandir at the place of Babri Masjid will not be accepted by Indian Muslims on which Indian establishment will resolve to violence to silent the protest of Muslims. This may result in a big human tragedy. Not only Muslims and minorities but lower caste Hindus is also insecure in India. Rapes of Christian nuns have become a routine in which even elderly women are not spared. Hindu extremist do all such crimes to express their hatred. Indian media suppresses such news in order to save the soft image of secular India on international level. However, foreign consulates in New Delhi report such incidents to their governments but Western countries remain silent on such incidents due to their interests linked with the Indian markets.


Analysts in India are of the view that in the coming elections BJP will nominate extremist Hindus like Yogi Adityanath. Meaning that the role of minorities will be limited gradually in Indian politics. These were the concerns due to which Muslims realized that Muslims cannot live as slaves of Hindu majority. Now, Dalits and lower caste Hindus acknowledge the truthfulness of Two Nations Theory, while anti-Two Nations Theory elements and pro-Indian elements are still captivated by the Indian slogans of democracy and claim that Pakistanis have no right to comment over the internal affairs of India. In reality, the target of Hindu extremists whether it is Bajrang Dal, RSS or their political cover BJP are not Indian Muslims but Pakistan and independence of Pakistan.