UAE-India Friendship or Reaction of CPEC?

Indian Prime Minister’s personal presence over the airport to welcome crown prince of UAE Muhammad Bin Zayed Al-Nehyan, presenting him bouquet, hugging him and full electronic and print media coverage etc. shows that the friendship between the two countries is not based upon the historical relations, traditional and cultural harmony but on the basis of clash of interests with Pakistan and China. That is why the PM of the nuclear power of the region himself went to the airport to welcome the crown prince of the union of different states and became target of criticism within India.
Prince Muhammad Bin Zayed Al-Nehyan visited India on the special invitation to attend the celebrations of Indian Republic Day. The critics in India are of the view that if it was inevitable to invite the head of state on the Indian Republic day than he should from a democratic state elected by the votes, having belief in the democracy and democratic values. The Crown Prince of UAE should also had kept this in mind that he is going to attend the Republic Day of such a country whose seven captured states are celebrating it as Black Day. One may say that geographically Tripura, Nagaland, Mizoram, Manipur, Meghalaya, Assam and Arunachal Pradesh are parts of India but Indian Held Kashmir is  not one of them but captured by force by India.


The case of Kashmiri Public is in the UNO to be resolved as Kashmiri celebrated Indian Republic Day as Black Day declaring strike against the torture and inhuman violence of Indian army. UAE knows well about the Kashmir Dispute. The atrocities committed by Indian Army against Kashmiri people, torture and inhuman treatment, shooting innocent people in the cold blood, the properties of Kashmiri being burnt and looted by Indian army, gang raping Kashmiri women; how is it possible that UAE Prince does not know about all this.
Moreover, the atrocities committed by Hindu Extremists against Muslim minority within India, burning Muslims alive under the allegations of eating meat of cow; participation of UAE Prince in Indian Republic Day despite of being aware of all these violations of human rights against Muslim in India means that means for the Muslims of India and Indian Held Kashmir that UAE rulers have no objection over the Indian Policy for denial of Right of Self Determination of Kashmiris. In this dispute they support India. They consider the violations of human rights in India against Muslim minority as internal matter of India. They do not care that Intellectuals, Analysts, politicians and other groups from India are also disappointed over the Hindu Extremism of Hindus while UAE leadership is so much taken by the love of India that on the eve of Indian Republic Day the highest building in the UAE was lit with the Indian Flag. This solidarity with India by UAE was expressed in such a time when Indian politics face was darkened due to the declaring this day as Black Day by states of the India and Indian Held Kashmir.


In order to give this a new color, India presented old Strategic Partnership deals of 75 billion dollars afresh. One and half year ago on 18th August 2015 the project of 75 billion dollars was declared when Indian PM visited Dubai to meet PM and Vice President of UAE Muhammad Bin Rashid Al-Makhtum. Look at the newspapers, the reports in the newspapers would show that how India presented these as the big diplomatic success and milestone in the development of India. On this occasion, the deals for improvement of Indian Defense, oil storage facilities, transport and communication systems, industrial zone, trade, new airports, railways and ports were signed. In order to portray the extremist Hindu mood of Modi and solace for Hindus, UAE donated a big chunk of land for construction of Hindu Temple (Mandir) along with the announcement that further opportunities for jobs for Indians in UAE will be created. On the end of the visit in the joint declaration the countries supporting religion for terrorism using for their own interests were condemned. Moreover, it was declared that both countries would fight against religious extremism and the terrorist groups. Indian media portrayed that this visit of August 2015, was suddenly arranged but astonishingly India needs to present these old deals again in its media. The sudden support of UAE for India and fueling Indian imperialist goals is strange… 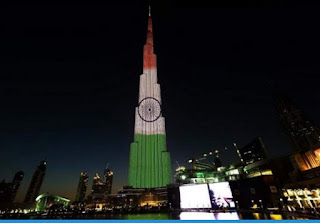