Indian Secret War Against Pakistan: Kulbhushan Yadev is not the First State Terrorist of India!

“There is a big shrine in Lahore, when I came out after offering prayers in the Mosque there was an elderly person with long white beard sitting in a corner, he called me towards himself and asked me whether I am Hindu? I replied, “No”. He asked me to follow him and took me into a small room and closed the door and repeated the same question, “Are you Hindu”. I once again said that no, I am Muslim; he said your ears have been pierced. Hearing this I was shocked and said, “I was Hindu but converted to Islam”. He did not accept this and advised me to get plastic surgery; it is not safe to move around in Pakistan with such get up. This old man said that he is Hindu as well and living on this shrine as a Muslim; people think him as great Sufi”.
The above quoted lines are from the long Press Conference of Advisor of Security for Indian Prime Minister Ajeet Kumar Doval. This Press Conference was addressed by him after retirement from IB. He told journalists that he has spent 7 years in Pakistan on secret missions. He told about the Dawood Ibrahim’s presence in Pakistan as well. If anyone himself confesses that he has served as spy (terrorist) in the other country is there any law that can punish him or start his trial? Pakistan inherited enmity with India. The conspiracies against Pakistan were started with the birth of Pakistan; there is a long history of aggressions against Pakistan. Sometimes in the form of open wars, time bombs and remote control bombs and suicide terrorist attacks. In such a situation if Ajeet Kumar Doval spends seven years in Pakistan, obviously he was not living on the shrine of Daata sb for selling flowers. He had been involved in terrorism and anti-state activities. 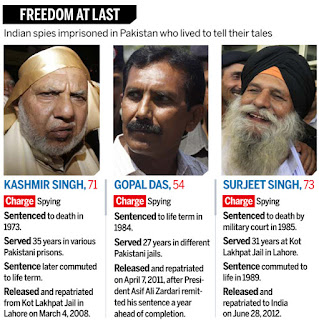 Kulbhushan Yadev infiltrated Pakistan in such a time when Zarb-e-Azb against terrorism was in its final steps. The hideouts of terrorists have been destroyed. But this bitter reality cannot be denied that last year in March 2016, the arrest of important officer of RAW was a big breakthrough. Moreover, in the history of world such incident has not be noted in which an important military designation holder was arrested as a spy in another country. After arrest Kulbhushan Yadev told that he joined Indian Navy as Officer and afterwards due to good positions in Intelligence courses he joined RAW in 2003. He supervised terrorist activities in Pakistan for long time and reached Chah Bahar Iran in 2013 in order to collaborate terrorism activities against Pakistan. He planned and executed terrorism from Iran via his agents. In his confessional statement he acknowledged that he visited Karachi various times for activities against Pakistan. After arrest India acknowledged him as citizen of India but termed him as retired officer of Indian Navy while Kulbhushan says that he will retire in 2022.


Ajeet Kumar Doval is not the first state terrorist who has proudly accepted his anti-Pakistan activities upon return to India. This list include Kishorilal Sharma who has written his days in Pakistan and the days spent in Pakistani prison after arrest in the form of a book. Is not his autobiography evidence of Indian interference in Pakistan? The painful aspect is that India is exploiting release of his state terrorist against Pakistan through propaganda and attempting to fuel provincial, linguistic and sectarian disputes through his autobiography. The autobiography of Kishorilal “My Years in Pakistani Prison” was published on July 2008. According to the author he has no link with Indian Military Intelligence, he came in contact with Indian MI through a friend of his brother. They gave him cover name “Amarik Singh” in India. He was named as Saleem for his mission to Pakistan. Look at a paragraph taken from Indian state terrorist Sharma’s book;
“The guard company seemed comprised of same half a dozen headed by a “JCO”, from their talks I could guess that they were all hailing from Balochistan province of Pakistan and apparently also belonged to Baloch Regiment of Pakistan army. They were a well knit team and I sometimes over heard them talking of each other complaining how the Baloch soldiers were discriminated against in the Pakistan army. They also condemned not just the Punjabi domination of their army but also the Un-Islamic and selfish attitude of their Punjabi compatriots whome they referred as “Jahil” and Khudgerg”. 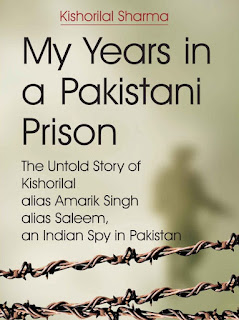 Look at the time of the publishing of the book that Indian state terrorist is released in 1974 but after 34 years of his release publishes his autobiography in 2008 when with the help of few militants and Indian sponsored terrorists busy in terrorism in whole Pakistan especially Balochistan under the garb of Freedom of Balochistan. These Indian sponsored terrorists claim that Punjabi army, Punjabi bureaucracy and Punjab’s control over Balochistan’s resources. Is not this stance being represented by Indian propaganda and in the book of Indian state terrorist Kishwari Lal Sharma?
Is this a mere coincidence that in 1971 India exploited this stance for separation of East Pakistan. How long will we trust the same enemy? Many nationalist parties in Pakistan have adopted this stance of India. The Baloch Sardar does not want that common people benefits from development in telecommunications, educational or health facilities. They misappropriate and transfer the funds given by federation for development of Balochistan to their personal accounts abroad and blame army and federation for deprivation of their people.
Similar situation is being faced in the Sindh; no one can dare to take breath of his own will. They exploit the deprivation of their people for their political and personal interests but ignore the Kalabagh Dam Project which is so much important for the country. They forget that this project is not for the power of the army but for the state of Pakistan.


The irony of the fate is that when a terrorist like AJeet Kumar Doval is given some important designation by Indian Prime Minister and visits Pakistan no one objects his visit, Prime Minister of Pakistan gives him special respect and old lame excuse is repeated that it was inevitable for decreasing tension with India and friendly relations with India.


Gopal Das, Kashmir Singh, Surjeet Singh a long list, all were Indian state terrorists, who were arrested just like Kulbhushan Yadev red handed. They confessed in Pakistani courts that they are employees of Indian Secret agencies and army. They were sentenced for terrorism through time and remote control bomb blasts by Pakistani courts. They all were respectfully released in the name of ending tensions with India where they were welcomed as heroes who had achieved their targets of terrorism in Pakistan. Gopal Das was sentenced with death punishment but Benazir Bhutto converted sentences of all those awaiting death with life imprisonment as she was elected as Prime Minister. All these terrorists who were release by Pakistan have different stories but similar way of release which shows some secret hand working behind it. Except Sarabjeet for whose release from Indian govt. to Indian Supreme Court’s Justice all wrote letters to govt. of Pakistan but he got seriously injured in a scuffle at jail and later on succumbed to injuries. But with the release of other terrorists did we succeed in decreasing the tension with India? The answer is in Negative.
Indians are content and calmful over the arrest of Kulbhushan Yadev because they are sure that just like other terrorists he would released as well under the garb of decreasing tension and friendship. Although in case of Kulbhushan Yadev Pakistan Foreign Ministry has submitted three dossiers to UNO Secretary General, obviously including USA all world powers have been informed about the arrest of Kulbhushan Yadev and his terrorist activities in Pakistan especially Balochistan however, including UNO no one has reacted over his arrest. India is also silent which is astonishing as well.